Astronomer Guy Ottewell reflects on the planet of love. 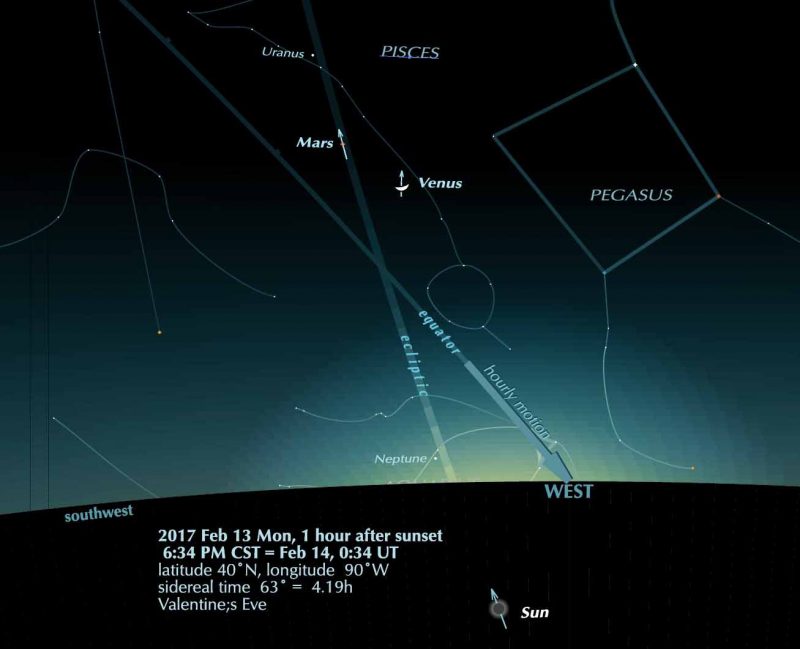 Don’t worry that this chart says February 13. The arrows through the moving bodies, including the sun, show their movement on the map of the sky from two days before to two days after that date. Oh, and that crescent-shaped object isn’t the moon. It’s Venus, which now appears as a crescent through a telescope as it nears its time of greatest brilliancy. Chart via Universal Workshop, Guy Ottewell’s website and weblog.

Why does Valentine’s Day come around in the glumly frigid pit of the year? Perhaps to remind us that contact with other mammals increases mutual warmth, besides stimulating serotonin or whatever the chemical is that (“studies show”) cheers us up.

This time last year, Venus was in the morning sky. Now the planet of love is more conspicuous, and more conveniently so, in the evening.

Venus is hurrying around toward us.

This space view shows the planets’ paths in February, and sightlines from Earth to them on Valentine Day. The dashed line is the vernal equinox direction (longitude 0°), which happens to be our direction of view for this picture. Chart via Guy Ottewell’s Universal Workshop.

There’s a pronoun-dilemma in referring to Venus: be arch and say “she” or be sober and say “it”? The planet, far from being a garden of delight, is a hell of hot poisonous fog, and I find the anthropomorphizing, or theomorphizing, rapidly cloys, but I’ll make an exception for this amorous occasion in the year.

She, then, Venus, is going through a succession of celebratory moments. She was at greatest elongation east, 47.2° from the Sun. on Jan. 17; will show her greatest illuminated extent (largest angular area that we see sunlit) on Feb. 17; is brightest, at magnitude -4.6, on Feb. 18.

Some have asked why these climaxes don’t coincide – why, for instance, is Venus not brightest when its – her – angular extent is largest? The answer, briefly, is that they are found by equations that take into account an array of changing quantities: not only distance from us and from the Sun, and angular extent, but phase angle (the angle Sun-Venus-Earth).

All this happens at stages of Venus’s curve around and in, to pass widely north of the Sun (inferior conjunction) on March 25.

And you can see from the space diagram that Venus’s out-swing almost resulted in a conjunction with Mars. However, the closest they came was on Feb. 2; then, as the sky scene shows, Venus started moving east more slowly than Mars – began falling away toward the Sun.

She sometimes kisses Mars, sometimes fails to catch him. As you’ll recall, Venus was married to Vulcan, the lame smith god, but had a fling with Mars. Vulcan caught them at it – flung over them an entangling net that he had devised, and fetched boss Jupiter to witness the couple’s guilt. The depiction of this scene in an engraving by Daumier is perfect, but I can’t find the copy of it that I had and I’m afraid you’re not going to be able to see it very clearly here … 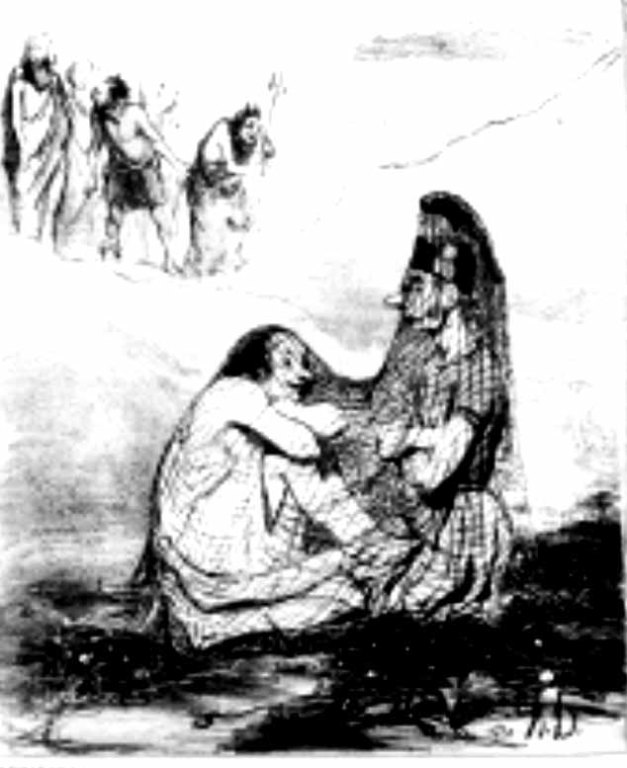 … so I’m going to have to spoil the joke by describing it. Under the net, Venus smirks and Mars (still wearing his helmet) scowls; Vulcan is shouting his denunciation – “Look, Sire, can you believe it!” – to judicious Jupiter, behind whose back the other gods are grinning.

But the old pantheon has gone into retirement, leaving us wih a few demigods such as Santa Claus and Valentine …