The light rays from the sun or the moon travel through more atmosphere near the horizon, which can cause the image you see to be distorted in imaginative ways. 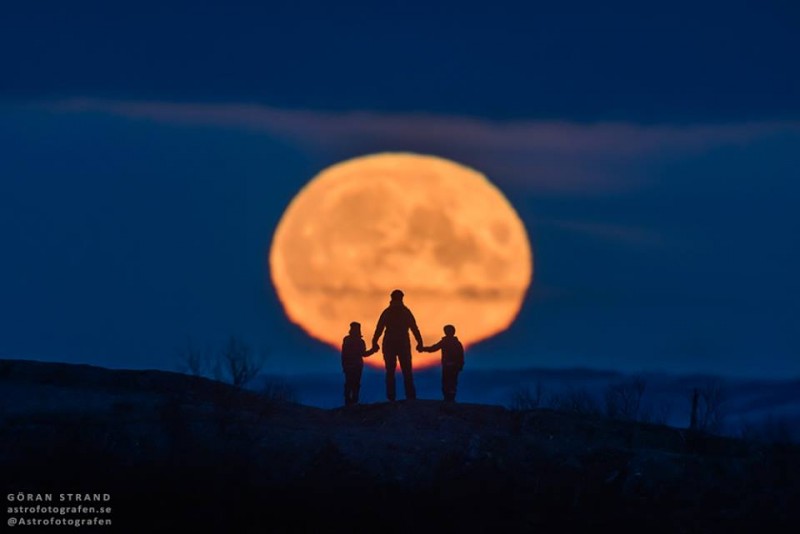 “This is my wife and my two kids watching tonight’s full moon rise above the horizon … The moon is somewhat deformed in the lower half due to atmospheric refraction.” Photo by Göran Strand.

Sunrises, sunsets, moonrises and moonsets are excellent opportunities to capture that particularly beautiful photograph. When you see them near the horizon, the sun and the moon can look distorted in the most fascinating ways. Their edges may appear jagged. Their bottom areas may flatten out or shrink into a pedestal. Nearby clouds and twilight color help make the artistic view even better.

But why does it happen? What causes the distortion in the appearance of a low sun or moon?

The answer is atmospheric refraction, the effect of light traveling through different densities and temperatures of air. Refraction is the same effect that causes a spoon in a glass of water to appear broken in two.

The fact is, when you gaze toward any horizon, you’re looking through more air than when you gaze overhead. It’s this greater quantity of air that causes oddly shaped suns and moons. At zenith (straight up) the atmosphere will be at its thinnest. That’s why professional astronomers prefer to observe their objects of interest as high up on the sky as possible (and as their telescopes allow), to diminish the effects of any atmospheric distortion lower in the sky. 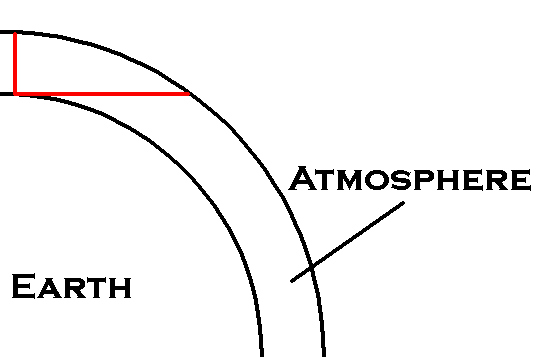 No matter where you are on Earth, as you look toward a horizon, you’re looking through more atmosphere than when you look overhead. Image via Phil Plait.

Once you can accept there’s more air in the direction of a horizon, you can think about all the different ways refraction affects a sunrise, sunset, moonrise or moonset.

Plus … it’s not only the amount of atmosphere that plays a role. It’s also the pressure, the temperature and the humidity, all of which affect the air density and thereby also the amount that light rays will be bent, or refracted, along their path.

Thus, temperatures varying with different layers of air can cause the light to spread to give a layered image of the object you’re looking at. In other words: the light is refracted more in some layers than in others.

Les Cowley at Atmospheric Optics explains why a spherical object appears flattened near the horizon: “Rays from the setting sun (lower) are refracted by the atmosphere and make it appear higher in the sky [higher image]. The lower limb is lifted more than the top limb, making its image oval.” Image via Les Cowley. 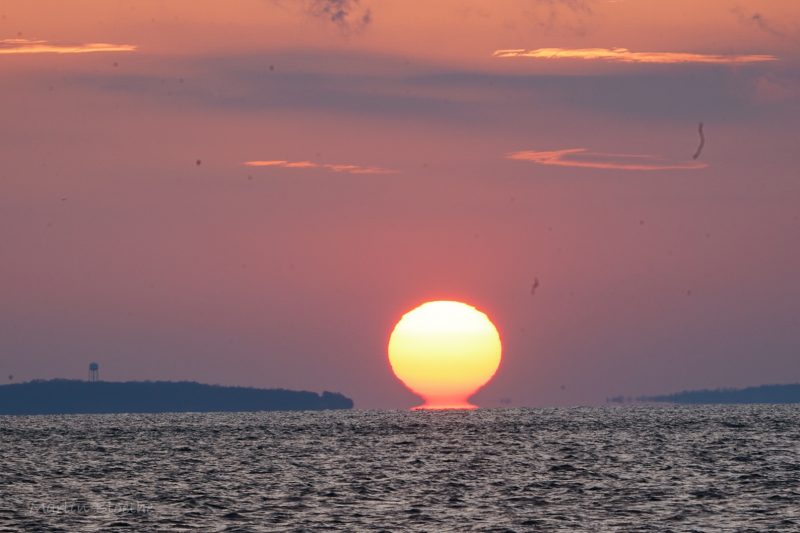 View at EarthSky Community Photos. | Marlin Bloethe Marlin caught this “omega sunset” on January 12, 2021 at Fishers Island, New York, looking westward over Long Island. This kind of mirage – called omega due to its resemblance to the Greek letter – occurs due to a change in temperature, a temperature gradient, in the vertical direction above the horizon. 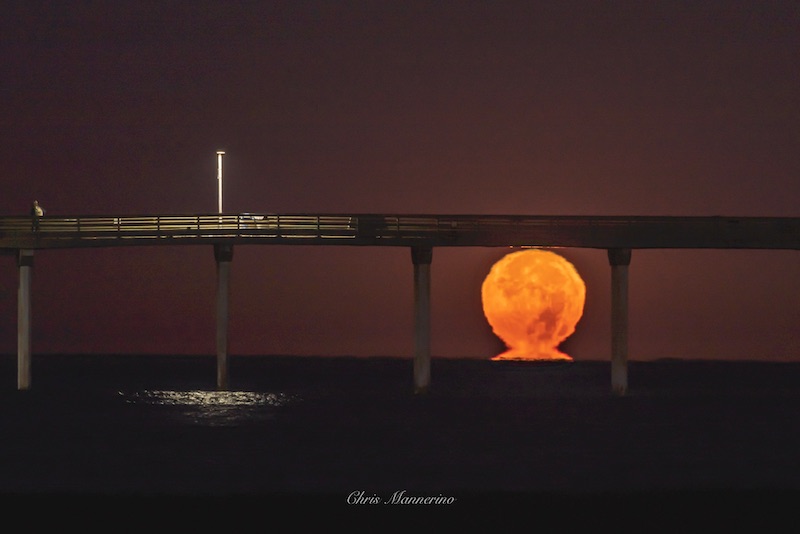 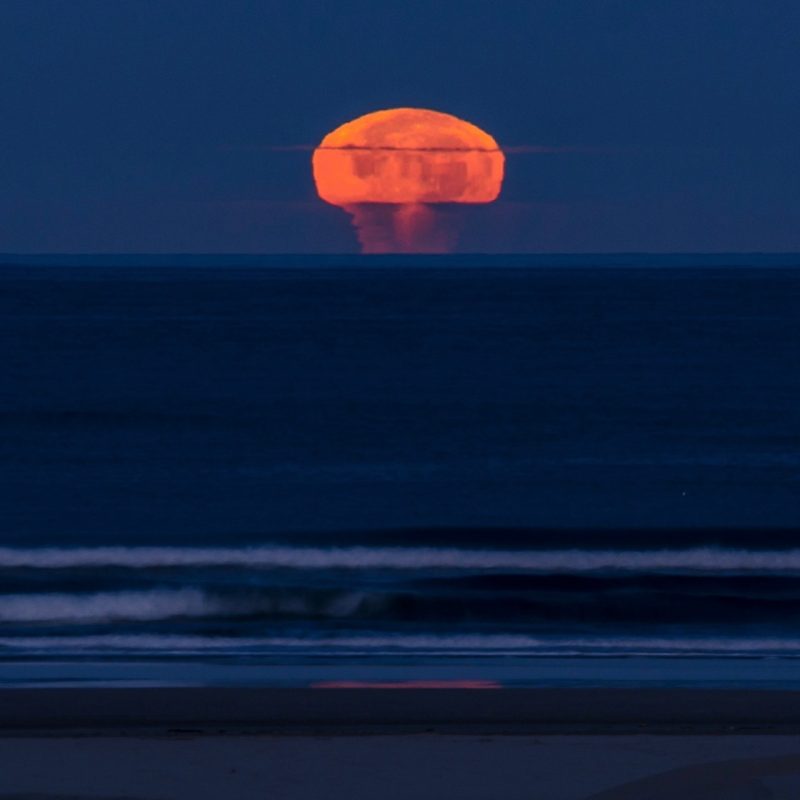 Gene Aubin in Newport, Oregon, caught the setting moon over the ocean on the morning of October 5, 2017. The layered effect causing a jellyfish-like distortion is a type of mirage, caused by refraction. Visit Gene at GuruShots.

The bending of light rays in this manner is referred to as atmospheric refraction. Without any kind of disturbance, light would travel in an absolutely straight line, and give your eye a true image of what you see (as long as your eye isn’t also disturbing it, but that’s another story).

For objects with a small angular size like stars, atmospheric refraction causes them to twinkle more the closer to the horizon they are.

And for an object with a fair amount of surface area like the moon and the sun, there is a change in the refractive effect along the height of it: the upper part travels through less atmosphere than the lower part, which makes the lower part more distorted. 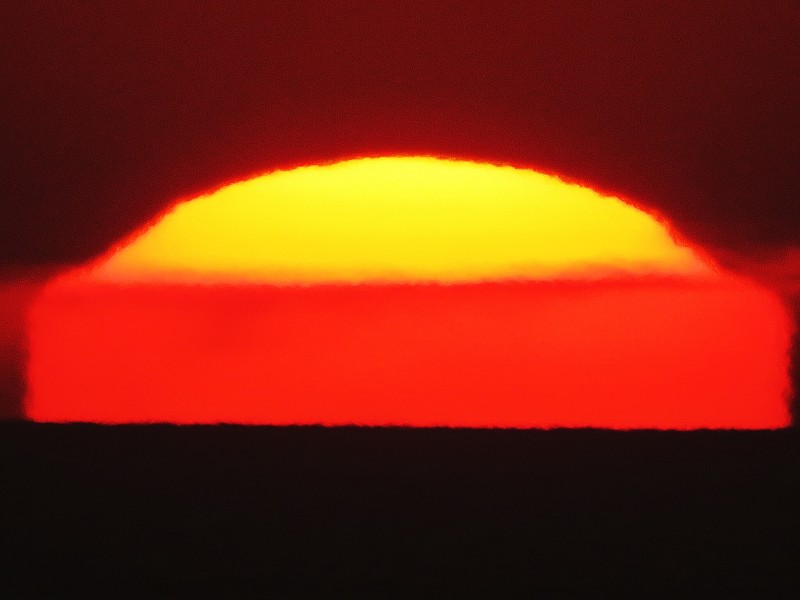 When the atmospheric refraction is at its extreme enters the mirage: This is the exact same situation – the light is bent and distorts the image. But here it can be refracted so much that there’s a mirroring effect and you will see drawn out or multiple images, or displaced images – the moon may appear higher on the sky than it actually is. A well-known mirage for the sun is the sought-after green flash. 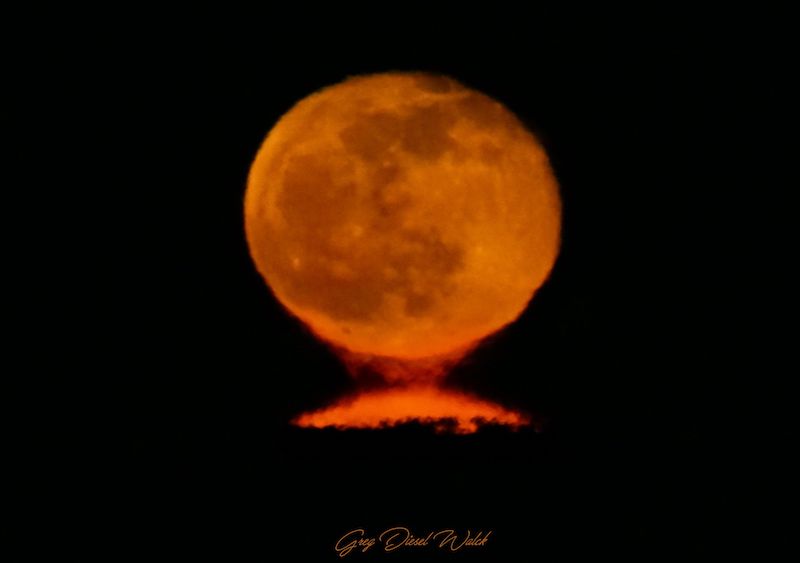 View at EarthSky Community Photos | Greg Diesel-Walck in Ormond by the Sea, Florida, USA, captured this photo on December 1, 2020. The atmospheric refraction gives the seemingly melting moon a reflection – a mirage. 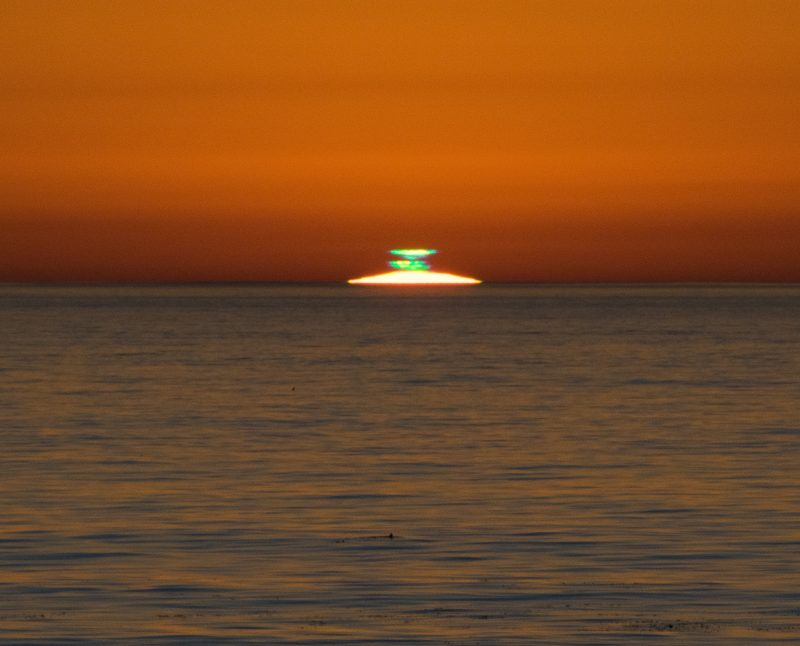 A green flash just before the setting of the sun, another example of a mirage. Photo via Chris Mannerino.

Additionally, light of different wavelengths is affected differently. For example, blue light (which has more energy/shorter wavelength/higher frequency – all of these are the same thing but with a different name) is more affected by refraction than red. That means red colors have a larger chance coming through to you than blue, which is why sunsets and sunrises appear more red and the moon is redder near the horizon.

The result of refraction is nature’s own form of art, perhaps reminiscent of impressionism. Maybe that is why we find it so appealing. The video below, captured by Mike Cohea, beautifully shows the effect of the thicker atmosphere as the young moon sets over Newport.

So, go out, bring your camera and keep watching the horizon (but never stare directly, or through a camera, at the sun). Then send your best results to EarthSky Community Photos, so that we can add them to this story!

Bottom line: The amount of atmosphere between your eye and what you observe determines how much the image you see will be distorted. This phenomenon – atmospheric refraction – is the reason why the moon may appear flattened near the horizon.