The Lyrids end the “meteor drought” that happens each year between early January and April. Enjoy these photos of the April 2020 Lyrid meteor shower from the EarthSky community. Thanks to all who contributed! 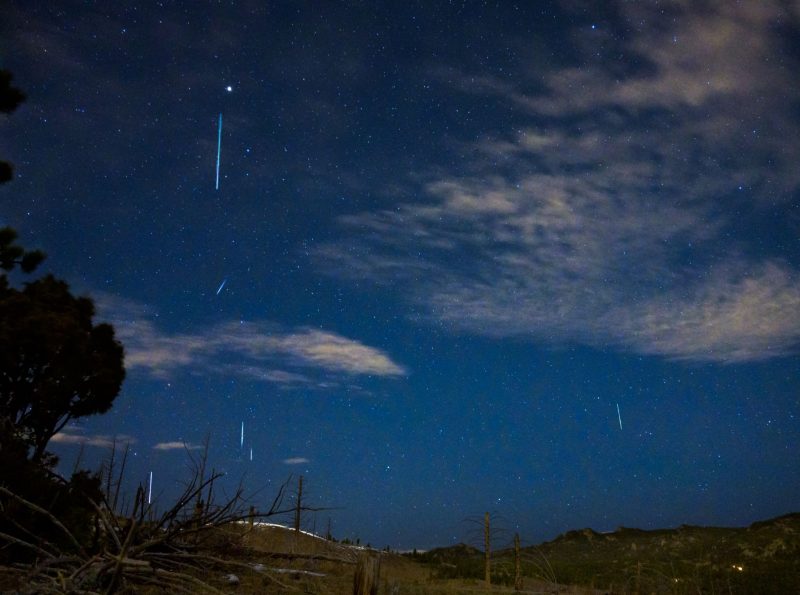 View at EarthSky Community Photos. | Photographer Thomas Hollowell in Colorado caught these meteors on the morning of April 22 and said: “The 6 meteors in this frame were stacked in Photoshop on a set of 3 background frames.” Thanks Thomas! We hope you got to see the Lyrids last week, too. Just ahead … The Eta Aquariid shower, peaking on (or near) the morning of May 5, will have to contend with a nearly full waxing gibbous moon. Try watching for meteors before sunup on May 1, 2 and 3. Fewer meteors will be flying then, but there will be a larger moon-free window between moonset and dawn. After the Eta Aquariids, summer will come to the Northern Hemisphere, bringing with it a long stretch of weeks of usually-reliable meteor-watching. EarthSky’s meteor shower guide here.

The annual Lyrid meteor shower likely peaked on the morning of April 22, 2020. The morning of April 23 might have produced some meteors as well. This shower comes after a months-long meteor drought between early January and April each year. So the April Lyrids are always welcome!

See more photos at EarthSky Community Photos, and submit your photo here. Thanks to all who’ve submitted.

Read more about catching the tail end of the Lyrid shower here. 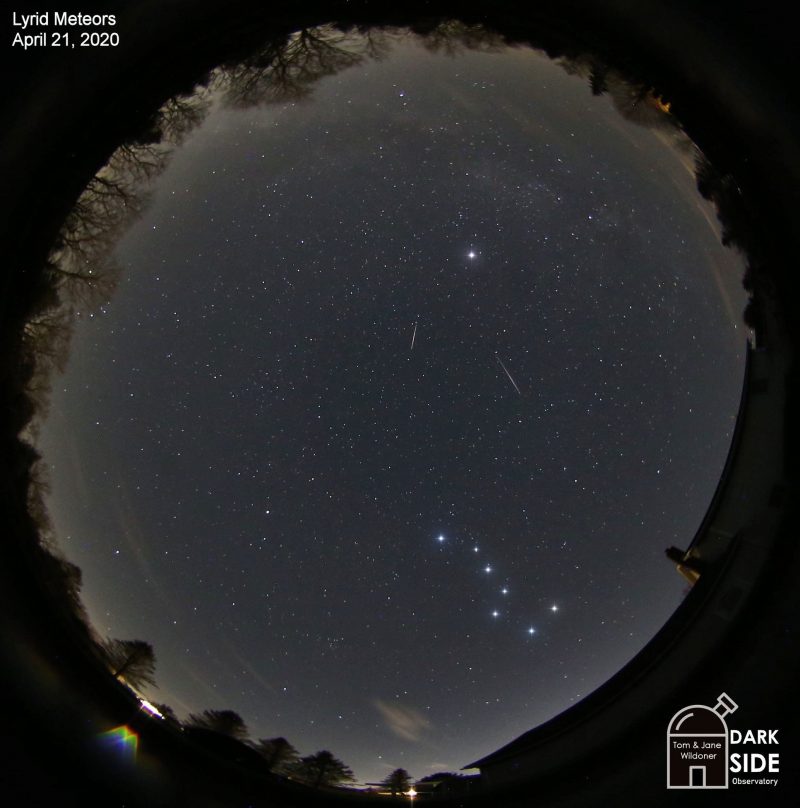 View at EarthSky Community Photos. | Tom Wildoner of Weatherly, Pennsylvania, wrote: “I managed to capture a few Lyrid meteors on the evening of April 21, 2020. Here is a composite image showing 2 meteors. The Big Dipper asterism and the star Vega (in the constellation Lyra) have been highlighted in this view to help orient you. The focal point of the Lyrid meteor shower is in the direction of Vega, you can see how these meteors point in that general direction.” Thank you, Tom. 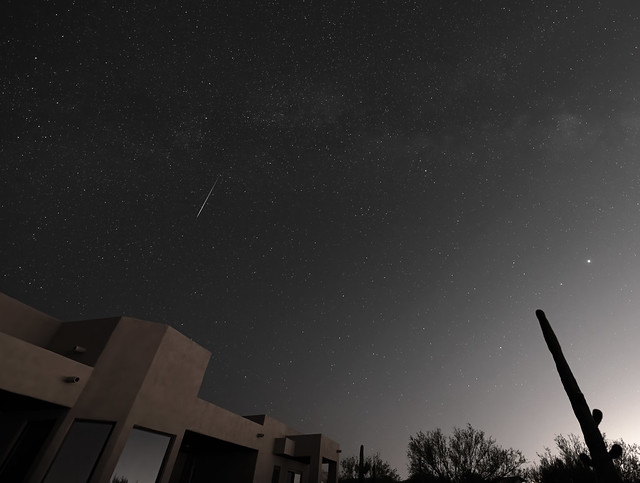 Eliot Herman in Tucson, Arizona, caught a Lyrid meteor on April 22, 2020. He wrote: “I spent from 3 a.m. onward watching and photographed all night. Not that many Lyrids but, with the new moon and a dark sky, it made for a pretty scene for me. I got this one with the Milky Way, the planets, and the Lyrids. The meteor looked brighter to the eye because it burned up in one second or so, but the exposure is 10 seconds, effectively diluting it.” Thank you, Eliot! 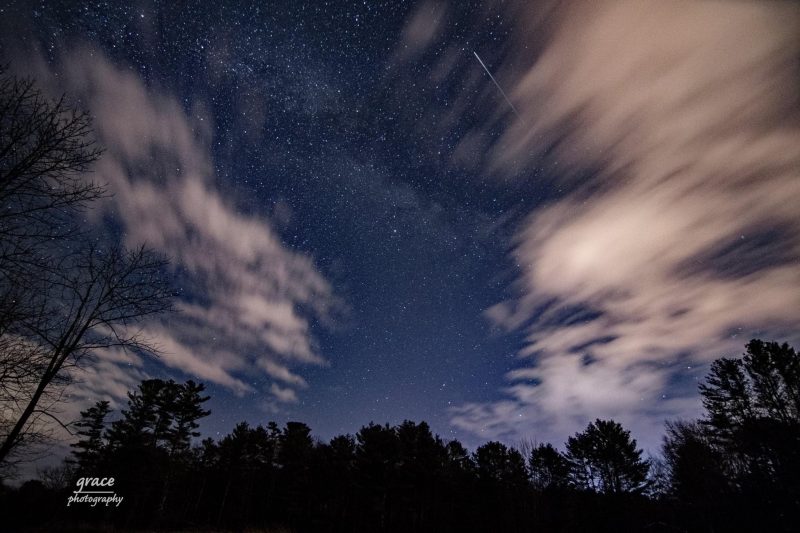 View at EarthSky Community Photos. | Kathleen Nadeau of Bath, Maine, captured this image on April 22. She said: “It was partially clear when I went out in the backyard at 3:20 a.m hoping to catch the Lyrid meteor shower, but the clouds quickly moved in. I was lucky enough to get the shot before it completely clouded over.” Thank you, Kathleen. 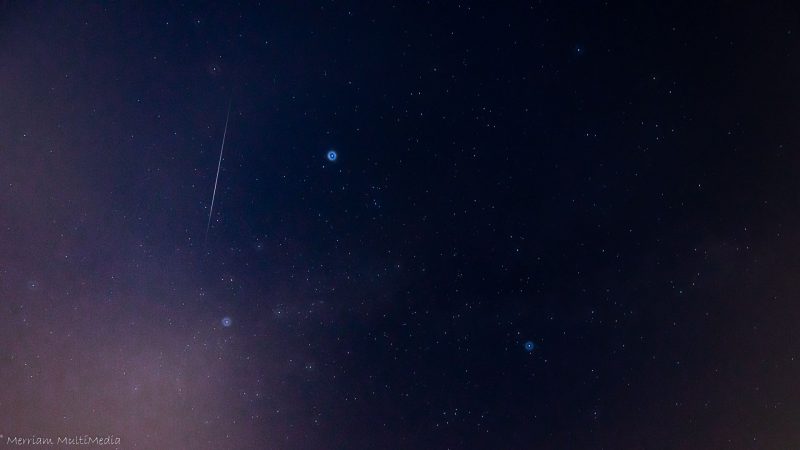 A Lyrid meteor streaks over St. Augustine, Florida, caught by John Merriam in northeast Florida on the morning of April 22. Thank you, John. 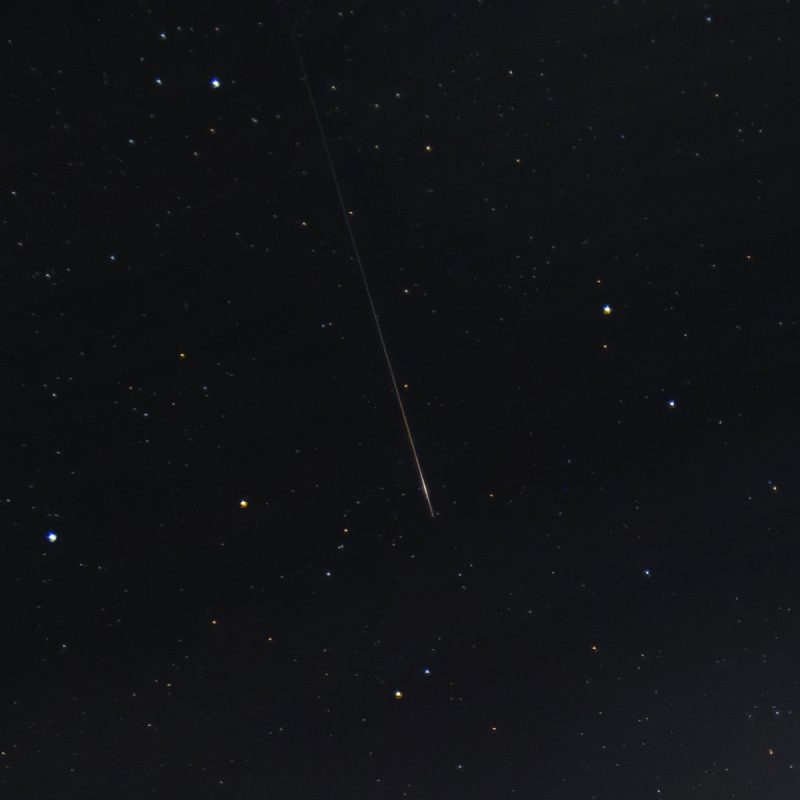 Joel Weatherly in Edmonton, Alberta, Canada, captured a video of a Lyrid meteor on April 21, 2020. He wrote, “This is my most detailed view of a Lyrid meteor entering Earth’s atmosphere, leaving behind a trail of ionized gas. The trail lasted for a few minutes before dissipating.” Thanks, Joel! 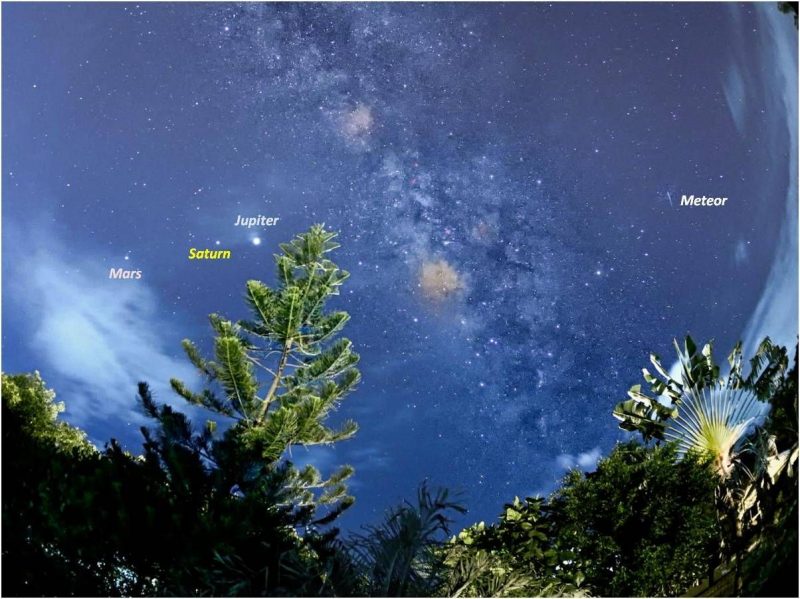 Dr Ski in Valencia, Philippines, caught a Lyrid meteor while observing the sky on April 21, 2020. He wrote about this photo: “That meteor is nothing to write home about, but this dreamscape intrigued me.” Us, too! Thank you, Dr Ski! 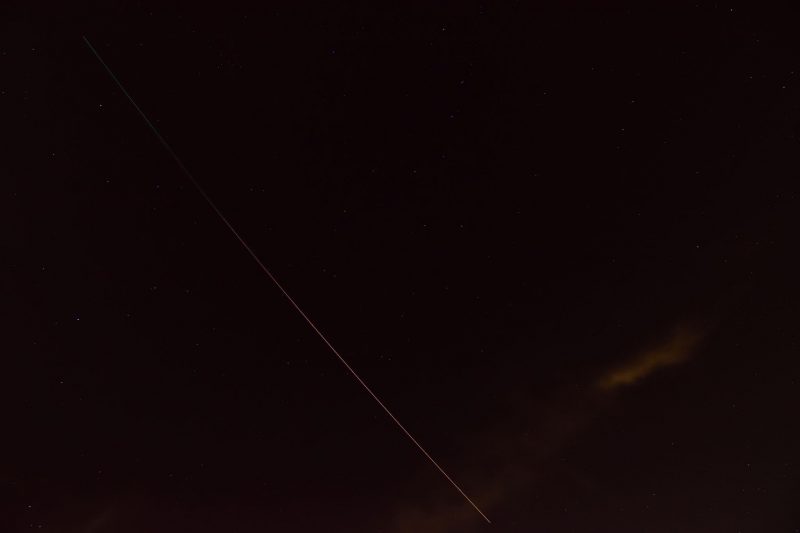 Richard Rice snapped this meteor in Rochester, UK, on April 20, 2020. He wrote: “Being only 15 miles from London UK, light pollution is a real problem where I live. The camera was left continually taking shots while my daughter and I lay in the garden trying to spot the Lyrids. However, this one surprised us coming from the NW. To the unaided eye it appeared as quite a fireball. As it was taken with an 11mm lens, you can imagine it covered quite a lot of sky.” Thank you, Richard. 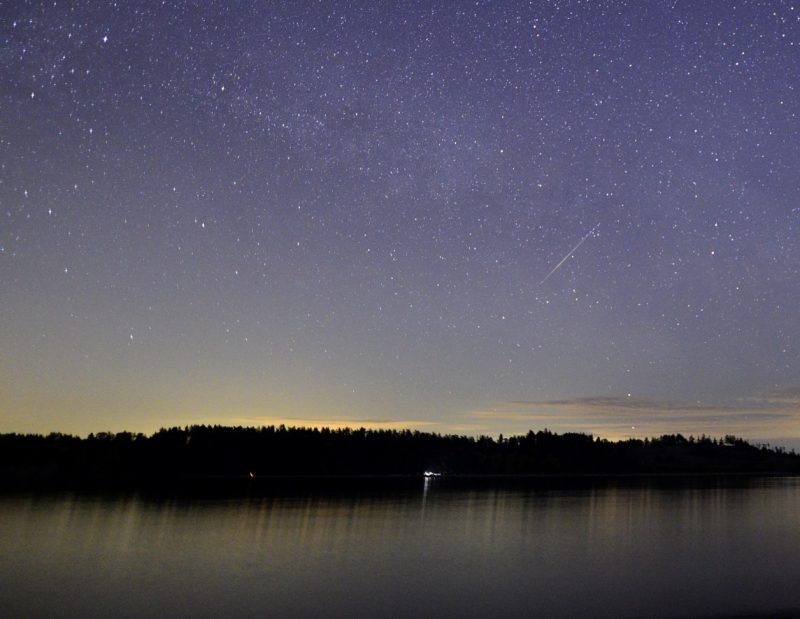 James Younger captured a meteor in the skies over Victoria, BC, Canada, early in the morning on April 20, 2020. He wrote: “… the skies are so clear here I can photograph the Milky Way just steps from my home.” Thank you, James. 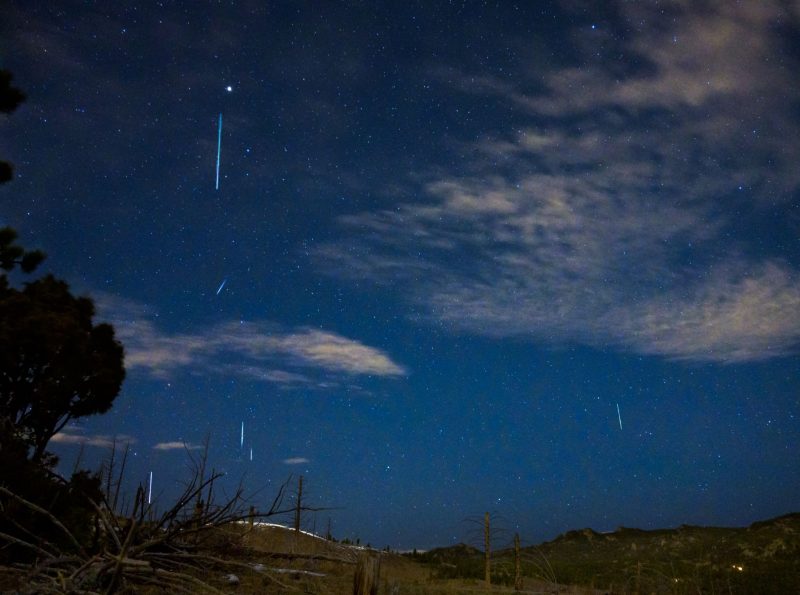 View larger at EarthSky Community Photos. | Photographer Thomas Hollowell said: “The Lyrid meteor shower put on a little show in the half hour before astronomical twilight began on the morning of April 22 in Colorado. The 6 meteors in this frame were stacked in photoshop on a set of 3 background frames.” Thanks, Thomas!

Bottom line: Photos from the EarthSky Community of 2020’s Lyrid meteor shower. Thanks to all who contributed!