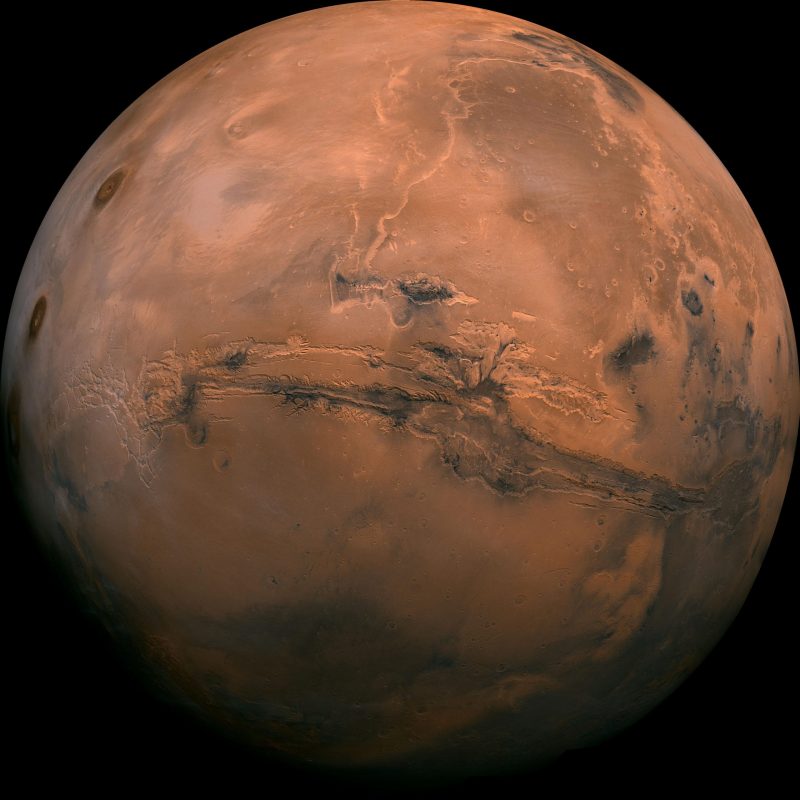 This view of Mars shows the great Martian canyon Valles Marineris. It’s as wide across as the continental U.S. and is often called the Grand Canyon of Mars. This image is a mosaic created via the Viking 1 orbiter, which reached Mars in 1976. Image via NASA.

Earth and Mars formed together in the great primordial nebula that also created our sun. Both Earth and Mars are about 4.5 billion years old. But, just as on Earth, a system of human timekeeping has been established on Mars. Earth’s most commonly used calendar is the Gregorian calendar, placing us in the year 2021. The Mars calendar is much newer. The count began at Mars Year 1 , at the northern spring equinox of April 11, 1955. A major dust storm on Mars raged in the second half of that Mars year (sometimes called the great dust storm of 1956). February 7, 2021, marks the start of Year 36 on Mars. Happy Mars new year!

Why label Mars years at all? Todd Clancy of the Space Science Institute was the first to describe a system for labeling Mars years, in a scientific paper published in the year 2000, describing temperature variations on the red planet. He established the system in orbit to enumerate Mars years and to help with data comparisons. In the years that have followed Clancy’s paper, other scientists also began using his system of Mars years, especially those who study Martian climate. Clancy and his co-authors described the choice of April 11, 1955 as “arbitrary”, but the 1956 great dust storm – falling in Mars Year 1 – provides a convenient marker.

Later, the system was extended by defining a Mars Year 0 (beginning May 24, 1953), and so allowing for negative year numbers. That’s similar to the use of A.D. or B.C. in the Gregorian calendar (or, more recently, CE or BCE). 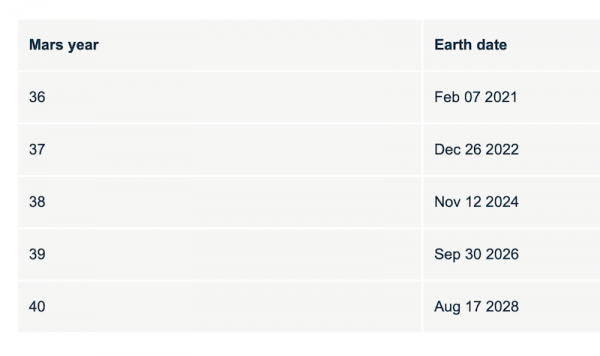 As counted by earthly timekeepers, the current new year on Mars – Year 36 – begins on February 7, 2021. Just as on Earth, a year on Mars is defined as a single orbit around the sun. A Martian year lasts about 2 Earth-years (687 Earth-days). Thus the next Mars years will begin on December 26, 2022. Image via ESA.

ESA provided these facts about timekeeping on Mars.

One year on Mars equals 687 Earth days. It takes almost twice as long as our Earth to orbit the sun. This means your age would be a lot less if you lived on Mars! If you would like to feel younger, just divide your current age by 1.88 and casually mention to your friends that that’s your real age … on Mars.

A Martian day is defined, like on Earth, as the time it takes for the planet to make one revolution around its axis. This is called a sol. A sol is only slightly longer than an Earth day: 24 hours and 39 minutes.

Mars’ elliptical orbit can have important consequences. During southern spring and summer, Mars swings by the sun closer and faster. The resulting increase in luminosity heats up the atmosphere, causing turbulence to lift up very fine particles from the Martian soil. For this reason, the second half of a Martian year is often marked by fierce dust storms that can sometimes become planet-wide.

Like on Earth, winters are cold and summers are warm on Mars, but the planet’s overall temperature is a lot cooler, it has a yearly average temperature of minus 60 degrees Celsius (-76 degrees Fahrenheit). The planet experiences different weather phenomena throughout the seasons. A weather phenomenon that reappears every year around the southern spring and summer is the Arsia Mons Elongated Cloud, a cloud of ice crystals that can reach up to 1800 kilometers (1,100 miles) in length. It repeats for at least 80 sols and then disappears again during the rest of the year. 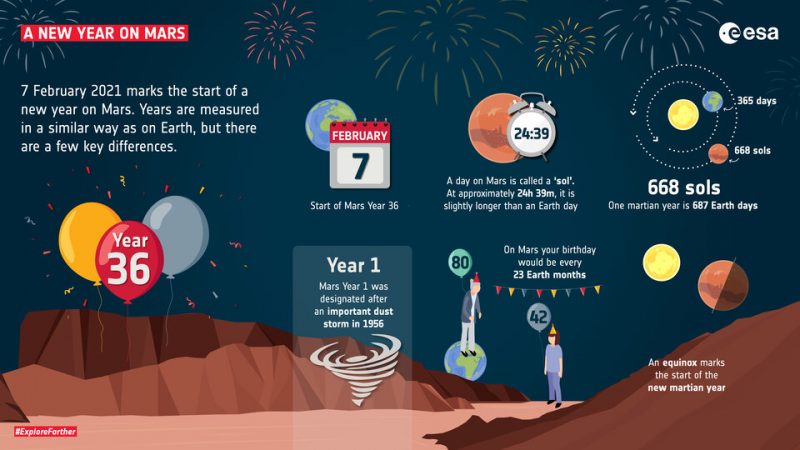