Jupiter’s equinox and mutual events of its 4 major moons

The king planet Jupiter reaches its equinox on May 2, 2021, an event that always causes mutual events of Jupiter’s 4 major moons. It’s an eclipse season of the moons.

From left to right – and from innermost to outermost in their orbits – the 4 major moons of Jupiter are Io, Europa, Ganymede and Callisto. Earth’s moon is nearly the same size as Io, but larger than Europa. Ganymede, the largest moon in our solar system, is much bigger than our moon; it’s even larger than the planet Mercury. Callisto is the 3rd-largest moon in the solar system – bigger than our moon, but smaller than Ganymede – and also a touch smaller than Saturn’s Titan. Photo via JPL.

The king planet Jupiter will reach an equinox – an event that happens twice in every 12-year orbit of Jupiter – on May 2, 2021. Around Jupiter’s equinoxes, we on Earth always have an opportunity to see a series of mutual events – or you might call them eclipses – of Jupiter’s four major moons. These are the four famous Galilean satellites, Io, Europa, Ganymede and Callisto. The eclipses are already happening. They’ll continue through August 2021. Experienced telescope users will be the ones seeing them; if you get an image, please submit it here. As the four large moons revolve around Jupiter, a moon shadow will sometimes eclipse (fall upon) a different moon. Or the body of one Jovian moon will occult (move directly in front) of another moon. For example, on April 4, Io’s shadow will fall upon Europa. The following day –  April 5 – Io itself will occult the moon Ganymede.

It hasn’t happened (we haven’t had a Jupiter equinox) since February 4, 2015. The next eclipse season for Jupiter’s moons won’t come again until around Jupiter’s next equinox, on December 16, 2026.

Also, from our earthly perspective, we only see Jupiter’s equator edge-on around Jupiter’s equinox. Without this edge-on view, we can no longer see moons occulting other moons. 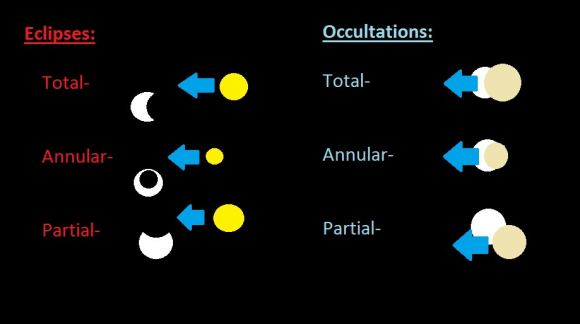 These four moons are called the Galilean moons to honor Galileo Galilei, who famously used one of the first small telescopes to observe the four moons revolving around Jupiter in the early 1600s.

Now and again, you might miss seeing a moon or two; they disappear from view when they swing behind Jupiter or in front of Jupiter from our earthly perspective. To find out the positions of Jupiter’s four major moons for right now – or some chosen time – use this handy interactive tool via SkyandTelescope.org. 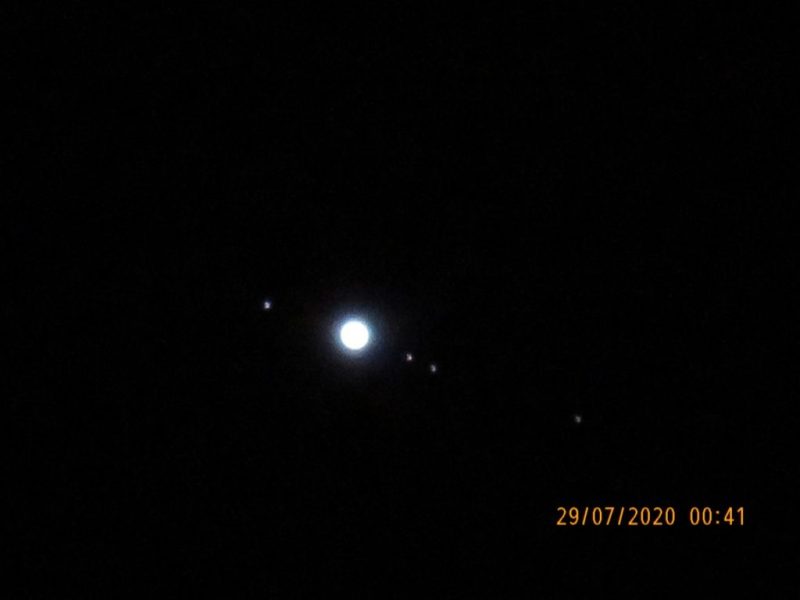 View at EarthSky Community Photos. | Binoculars will enable you to capture a glimpse of a moon or 2 of Jupiter’s, and a small telescope reveals all 4 of the largest Jovian moons, the Galilean satellites, spread out in line across Jupiter’s midsection. This photo comes from Mohamed Mohamed in Tripoli, Libya. He captured it on July 29, 2020.

With a higher-powered telescope, you can watch the moons’ dark shadows transiting (or crossing) the near side of Jupiter’s disk, and the moons themselves sweeping through Jupiter’s dark shadow on Jupiter’s far side. It is more difficult to view a Jovian moon itself transiting Jupiter, however. That’s because both Jupiter and its transiting moon are basking in sunlight, providing no sharp contrast between the moon and Jupiter. 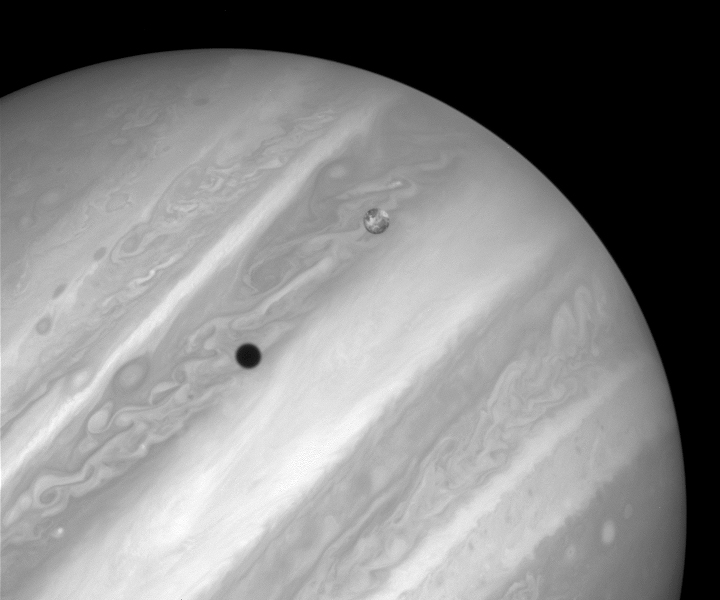 Hubble portrait of Io, the innermost Galilean moon, in front of Jupiter, and Io’s shadow falling upon Jupiter’s cloud tops. On April 4, 2021, Io’s shadow will actually fall upon the moon Europa, and then, on April 5, 2021, Io itself will occult the moon Ganymede. Read more. Photo via J. Spencer (Lowell Observatory), and NASA/ESA

Callisto, the outermost moon, is the only Galilean moon that doesn’t pass in front and behind Jupiter with each revolution. For a few years – roughly centered on Jupiter’s solstice on January 20, 2024 – Callisto will swing to the north and south of Jupiter at each revolution as seen from Earth. This year, however, it’s a totally different story. Callisto’s shadow not only transits Jupiter at each revolution all year long, but eclipses Io, Europa and Ganymede in the month of April 2021 alone.

With a low-powered telescope – anytime Jupiter is visible – it’s easy to see Jupiter’s four major moons as pinpricks of light lining up upon the same plane.

It takes a practiced observer with a high-powered telescope to tease out Jupiter’s moons eclipsing and occulting other moons upon the great merry-go-round of Jupiter’s equatorial plane.

Either way, it’s a fine year for enjoying the dance of Jupiter’s moons.

The 3 inner moons – Io, Europa and Ganymede – are locked into a 4:2:1 orbital resonance. That is, Io circles Jupiter 4 times for every 2 times that Europa circles Jupiter and every one time that Ganymede does. Image and more explanation via Wikipedia.

Bottom line: Jupiter’s equinox is May 2, 2021, and – around every Jovian equinox – we on Earth can see Jupiter’s moons eclipse each other. These mutual events of Jupiter’s moons are already happening this year; they’ll continue through August 2021.