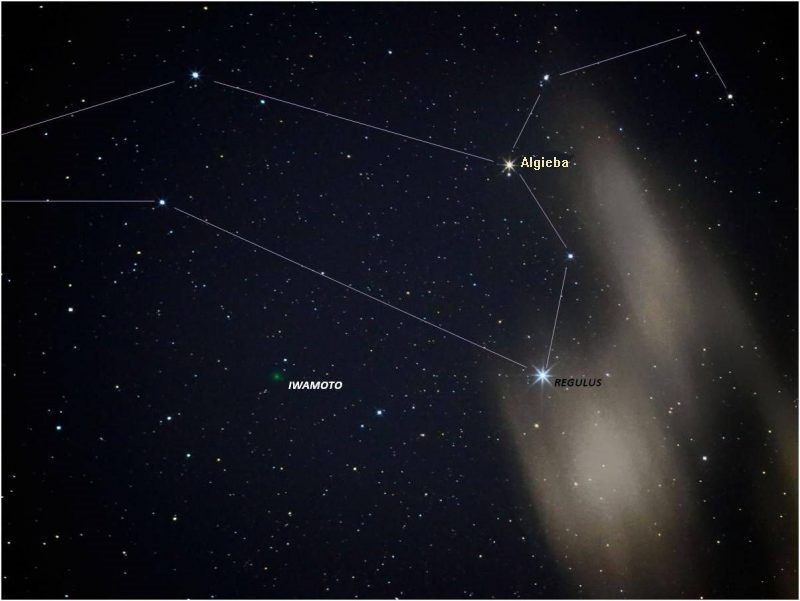 View larger at EarthSky Community Photos. | Comet Iwamoto was heading for the Sickle of Leo – a backwards question mark pattern – when caught by Dr. Ski in the Philippines on the morning of February 11. At closest approach, the comet will be in front of Leo, visible late night to dawn now.

Japanese astronomer Masayuki Iwamoto discovered a new comet in late 2018. It’s a fast-moving comet that will be closest to Earth on February 12, 2019, at around 3:10 p.m. EST (20:10 UTC; translate to your time zone). The celestial visitor will safely pass by Earth at some 28 million miles (45 million km). The comet has been designated C/2018 Y1 (Iwamoto).

The best nights for observing the comet with optical aid should be on February 12 and 13. It will not be visible to the eye alone. But observers report it is now visible in binoculars. 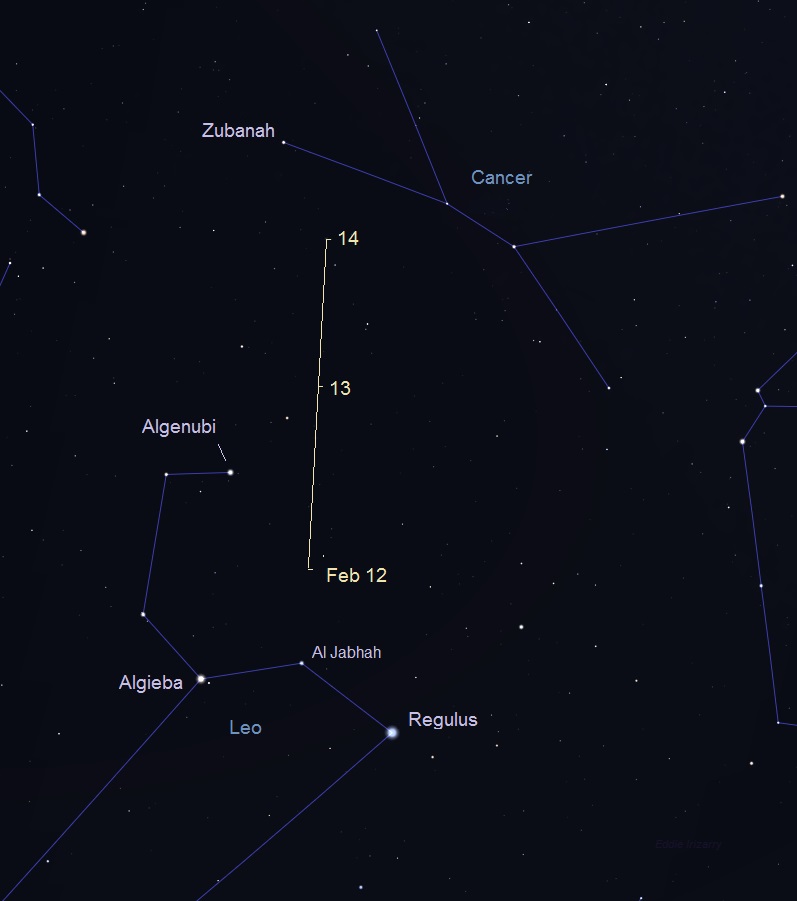 Location of comet C/2018 Y1 (Iwamoto) from February 12 to 14, 2019. Facing east at 9 p.m. CST as seen from central U.S. Binoculars or a small telescope should provide a nice view of the fuzzy patch of light. Illustration by Eddie Irizarry using Stellarium. 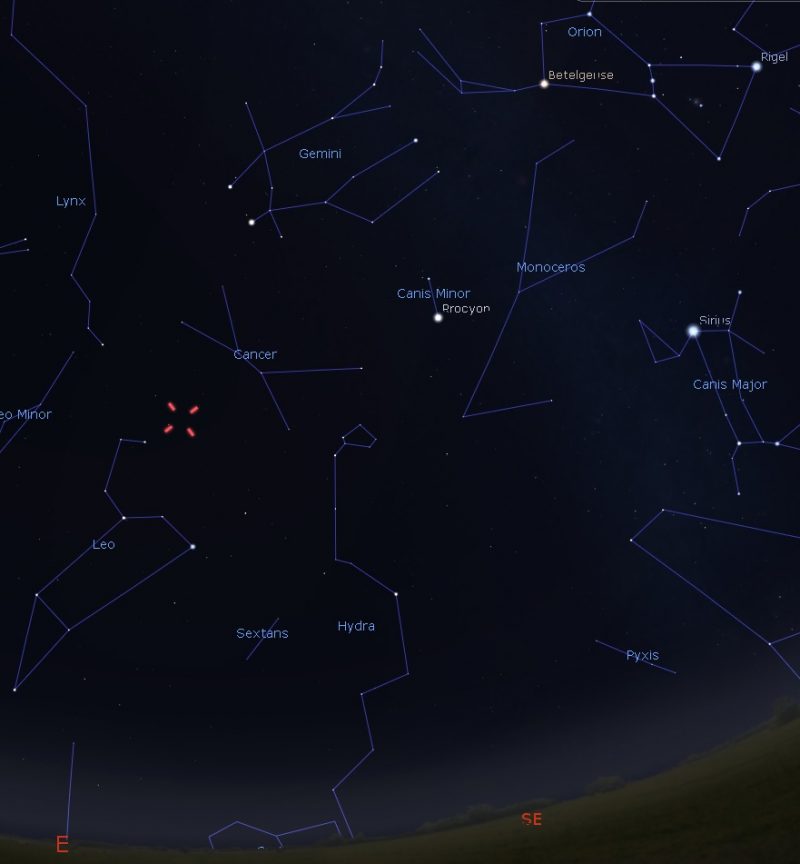 Location of comet C/2018 Y1 (Iwamoto) on February 13, 2019. Facing East at 9 p.m. CST as seen from central U.S. The fuzzy patch of light is visible using binoculars or a small telescope, away from city lights. Illustration by Eddie Irizarry using Stellarium. 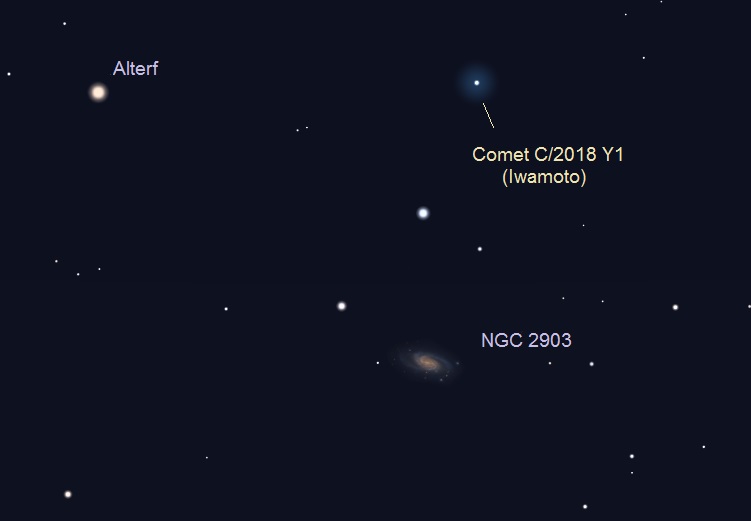 The comet offers an exquisite sight shortly after nightfall on Wednesday, February 13, 2019. Comet C/2018 Y1 (Iwamoto) will pass very close to NGC 2903, a beautiful galaxy in Leo.  Although the encounter’s timing favors observers in Europe and Africa, sky enthusiasts in America will also see the comet passing close to the galaxy, if they have their telescopes ready at nightfall. This view will be amazing, especially for astrophotographers! Illustration by Eddie Irizarry, using Stellarium.

The orbit of comet C/2018 Y1 (Iwamoto) is so elliptical (elongated), that calculations indicate it takes around 1,371.3 years to return.

As you see this astronomical object with your own eyes (using binoculars or a small telescope), it will be amazing to realize that humans might see this comet again around year 3390. 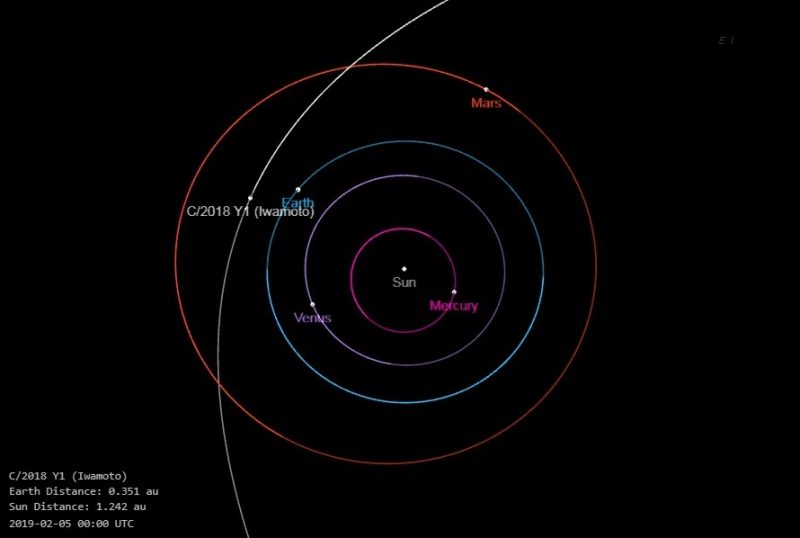 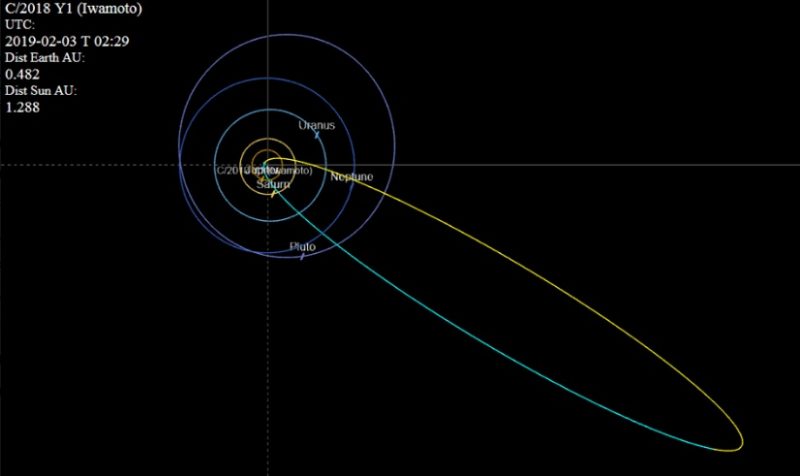 Amateur astronomers have been catching wonderful images of this comet for some time. If you get a good image, please submit it to EarthSky Community Photos. Good luck! 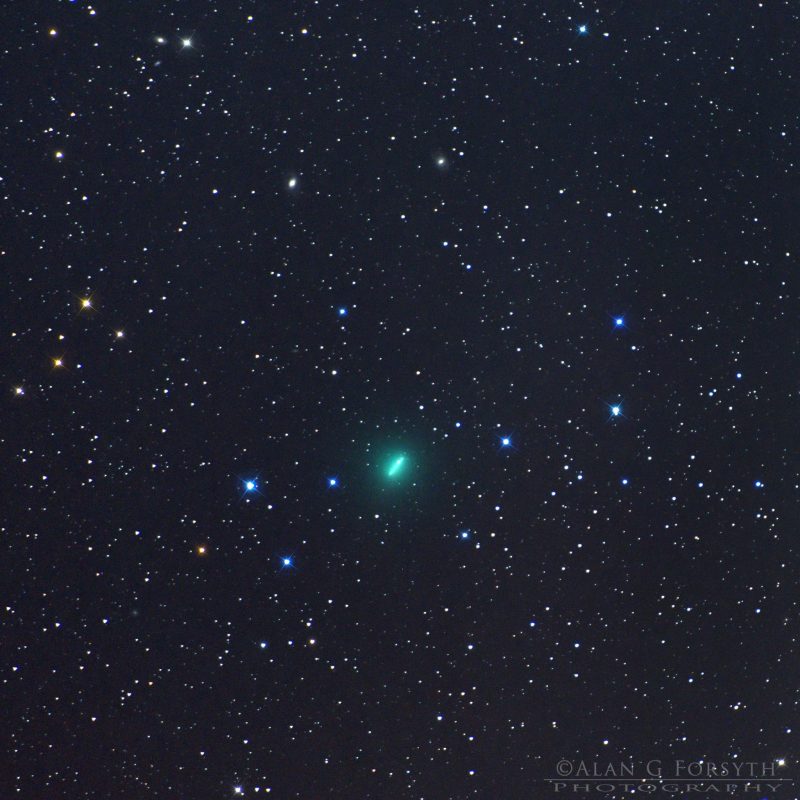 View at EarthSky Community Photos. | Fast-moving comet C/2018 Y1 Iwamoto as captured in 20 50-second images, stacked, by Alan Forsyth in Cowal, Argyll, Scotland. “This fast comet can sure shift through the skies in the 20 minutes of this combined exposure!” he wrote. Photo taken February 10. On Tuesday night, when the comet is closest to Earth at 28 million miles away, its movement will be even more noticeable. 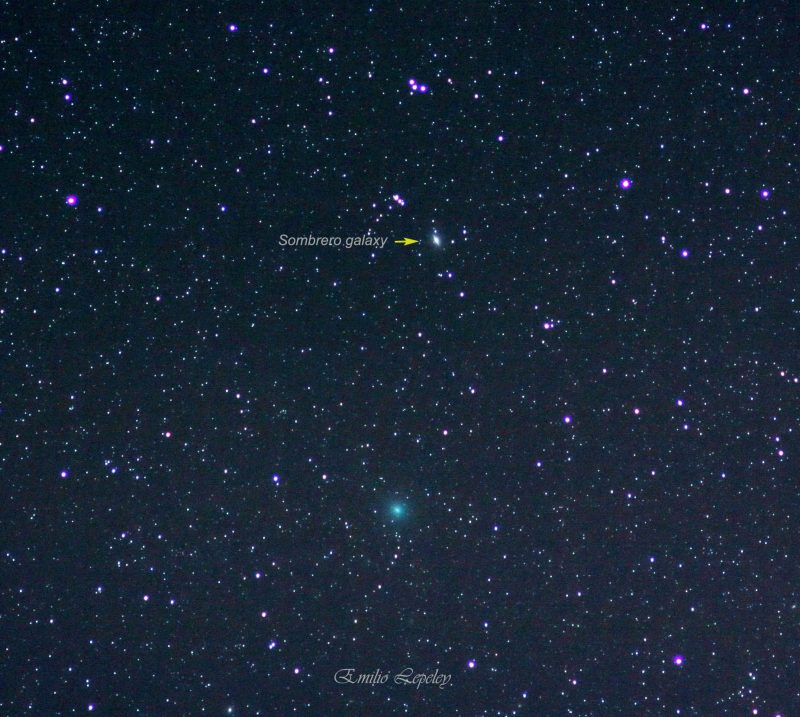 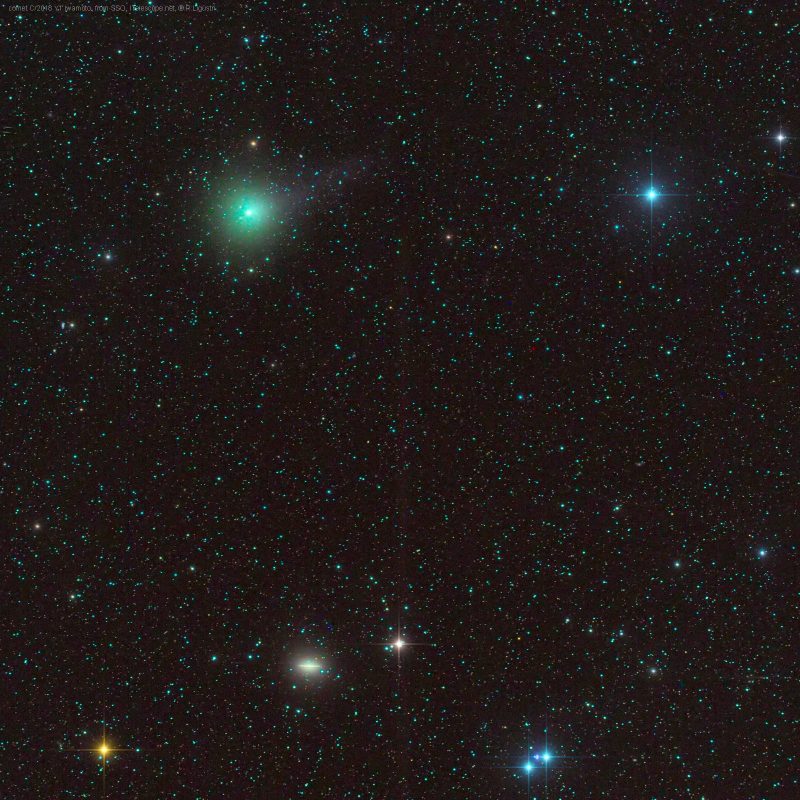 Green comet C/2018 Y1 (Iwamoto) is seen here as it was passing close to the Sombrero galaxy (Messier 104) on February 3, 2019. The galaxy is at the bottom of this image by Rolando Ligustri. Thank you, Rolando. 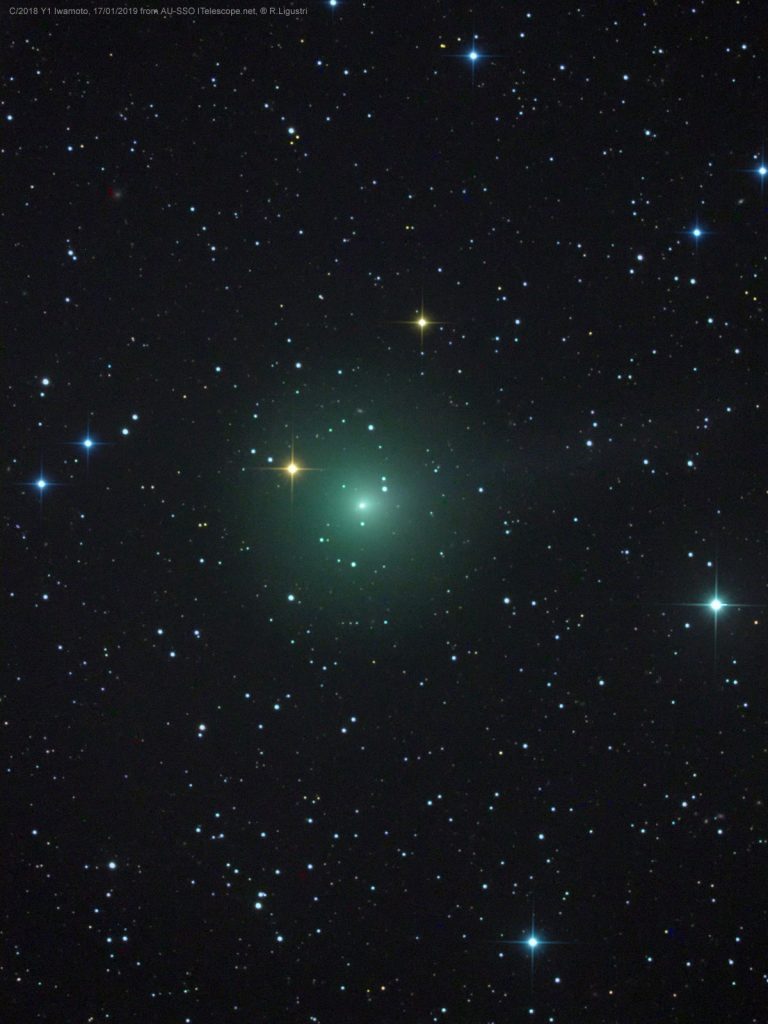 Our friends from Northolt Observatories captured an animation or sequence of images in which Comet C/2018 Y1 (Iwamoto) is seen as it moves across the sky:

C/2018 Y1 (Iwamoto) is a long period comet that is currently observable at 7th magnitude, just too faint to be seen with the naked eye.

The tumbling satellite OLYMPUS-1 is crossing the field of view.

Bottom line: A new comet soon to be within reach of binoculars and small telescopes is heading toward a February 2019 encounter with the sun and Earth. It’ll pass Earth safely on February 11-12.