When the asteroid labeled 2001 FO32 sweeps closest to Earth on March 21, 2021, it’ll be moving at such a fast pace that observers using telescopes might be able to detect its motion – its drift in front of the stars – in real time. Charts and info here.

Update 3/21/2021: Asteroid 2001 FO32 appeared in our skies slightly brighter than expected. A comparison with background stars suggest the space rock was at closest approach as bright as a 9 to 9.5 magnitude star, instead of the expected 11 magnitude.

The biggest known asteroid to pass in 2021 will sweep by on March 21. Asteroid 2001 FO32 is estimated to be about .6 miles (1 km) in diameter, not quite as long as the Golden Gate Bridge, but comparable in length. Although there’s no risk of impact, the space rock is of interest also because it’s one of the fastest space rocks known to fly by Earth. It’s traveling at about 76,980 miles per hour (123,887 km/h) or 21 miles (34.4 km) per second, relative to Earth. In contrast, Earth travels around the sun at about 18 miles (30 km) per second. Since 2001 FO32 is good-sized and occasionally passes near Earth, it’s been classified as a Potentially Hazardous Asteroid. Its orbit is well known, though, and it poses no risk of impact now or for centuries to come. On the contrary, astronomers are excited about the asteroid, which, NASA has said will provide them with:

… a rare opportunity to get a good look at a rocky relic that formed at the dawn of our solar system.

Based on its brightness and the way it reflects light, 2001 FO32 is probably between 0.767 to 1.714 kilometers (.5 miles to 1 mi) in diameter, making it larger than ~97% of asteroids but small compared to large asteroids.

A fascinating aspect of asteroids is that observers using backyard telescopes can spot them as apparently slow-moving “stars.” It typically takes at least 5 to 10 minutes for backyard telescope users to detect a space rock’s motion in front of its starfield. But asteroid 2001 FO32 will be sweeping past Earth at such a fast pace that, when it’s closest, observers using 8-inch or larger telescopes might be able to detect its motion – its drift in front of the stars – in real time.

We note that the space rock will be too faint to see wth the unaided eye. It’ll be visible to observers using 8-inch or larger diameter telescopes. You must aim your telescope at the correct position in the sky, at the right time. The charts in this post provide details. You might also check Stellarium online or TheSkyLive for more details on observing.

After it passes by Earth in March 2021, the next encounter of this asteroid with our planet occurs in 31 years, on March 22, 2052. However, the 2021 approach will be its closest to Earth for the next 200 years for which its orbit has been calculated.

The space rock’s orbit carries it around the sun every 810 days (2.22 years). It comes as close to the sun as 0.30 astronomical units (1 AU = 1 Earth-sun distance). It travels as far from the sun as 3.11 AU. Its orbit is highly elliptical (as opposed to being closer to circular). 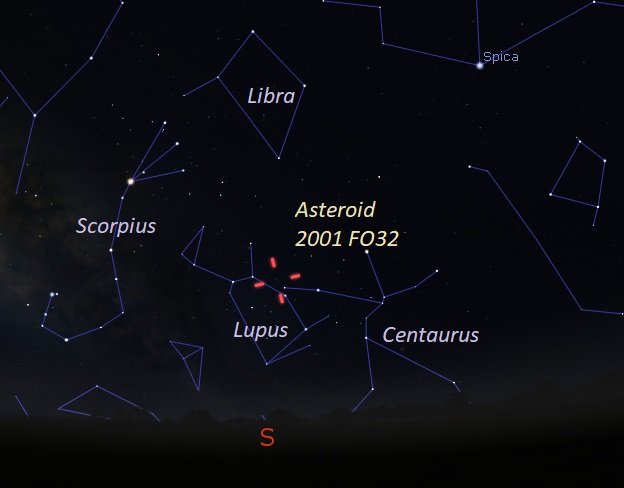 Location of asteroid 2001 FO32 on March 20, 2021, at 3:45 am ET, as seen from southern U.S. The space rock will be too faint to see wth the unaided eye, but visible to observers using 8″ or larger diameter telescopes.  Illustration by Eddie Irizarry using Stellarium. 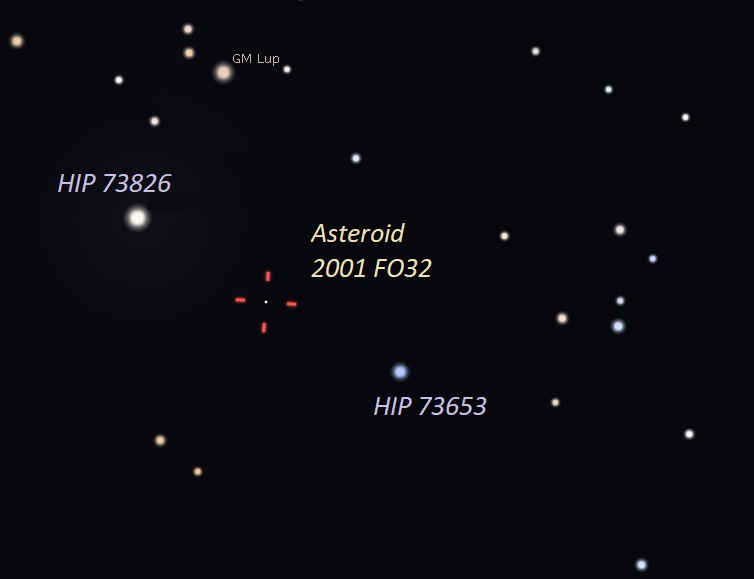 Location of asteroid 2001 FO32 on March 20, 2021, at 3:45 am ET. Observers using a computerized or “Go To” telescope can point their instrument at one of these reference stars a few minutes before, and wait for the asteroid, which will appear as a slowly moving “star.” Illustration by Eddie Irizarry using Stellarium. 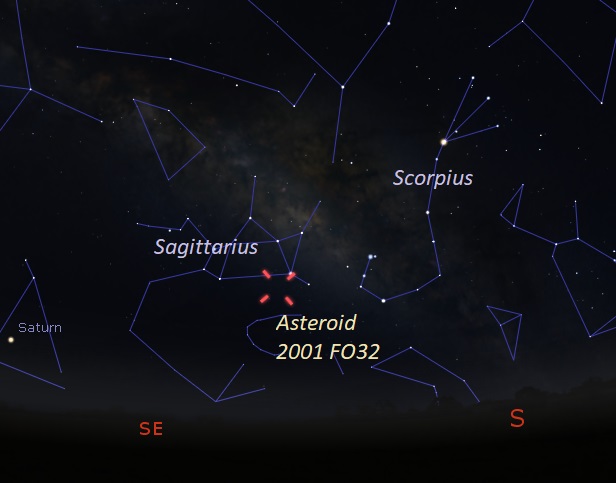 Location of asteroid 2001 FO32 on March 21, 2021, at 4:45 am ET, just hours before its closest approach to Earth, so the asteroid’s motion will be easiest to detect in real time through a telescope. Illustration – set for southern U.S. – by Eddie Irizarry using Stellarium. 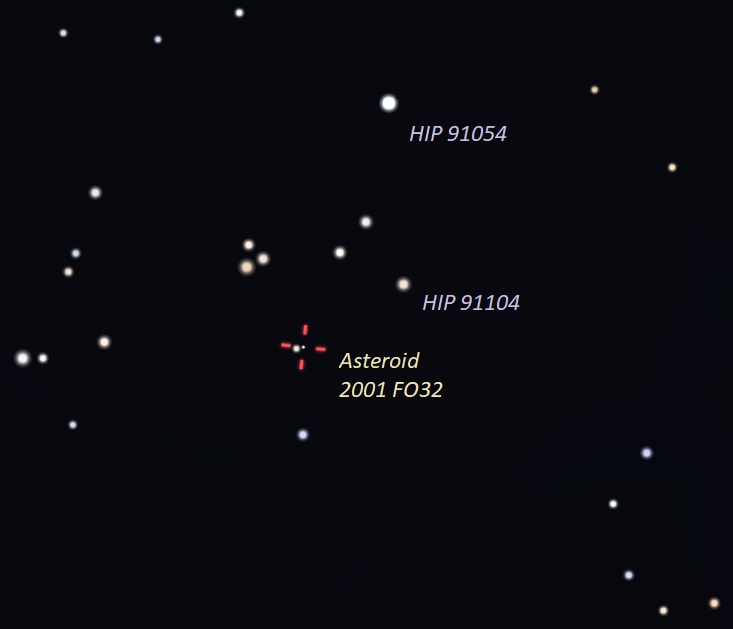 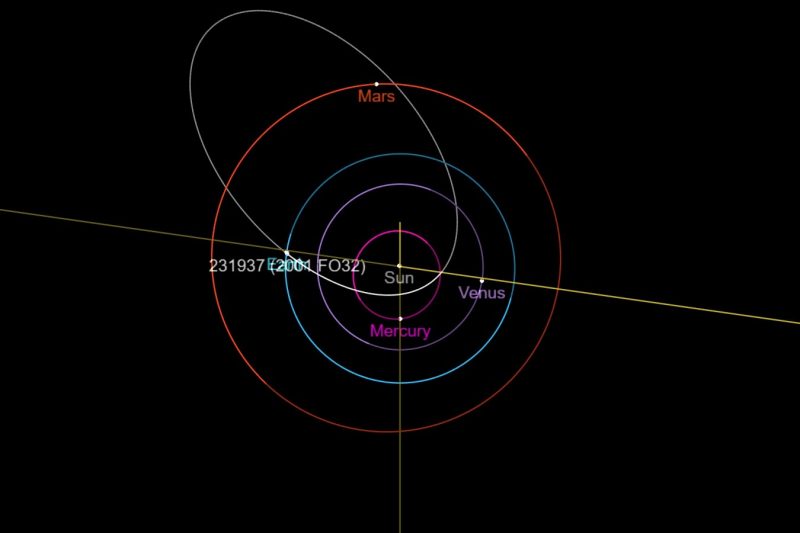 How fast did Asteroid 2001 FO32 appeared at the eyepiece or monitor using a telescope? Take a look at this video taken just before sunrise on March 21, 2021, by Eddie Irizarry:

Bottom line: Asteroid 2001 FO32 is the biggest known asteroid to sweep past Earth in the year 2021. It will fly by at such a fast pace that, when it’s closest, observers using telescopes might be able to detect its motion – its drift in front of the stars – in real time.