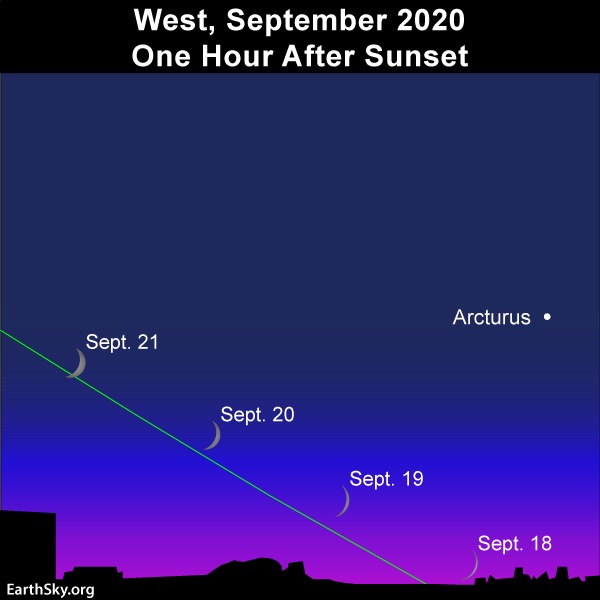 On September 17, 2020, the new moon passed 5 degrees north of the sun to transition out of the morning sky and into the evening sky. On the day of new moon, we didn’t see the moon at all, because it rose and set with the sun (more or less) and so was lost in the sun’s glare throughout the day. But the moon always returns after new moon to the west after sunset, as it will on September 18, 19, 20 and 21. On one or all of these evenings, you’ll spot the young moon, a little crescent.

In the days after new moon, as the moon continues its ceaseless journey around Earth, it’s easy to picture the moon moving east of the sun on the sky’s dome. That’s what our chart at top shows, and it’s what you’ll see if you look in the sky on each of these evenings: the crescent moon a little farther from the sunset.

Will you see the moon on September 18? Generally, it’s hard to spot a moon that’s less than one day old (less than 24 hours after new moon). For almost all the world on September 18, 2020, the moon will be more than one day (24 hours) old at sunset, but not by much. It’ll take a considerable effort to catch the slender crescent, especially because we’re near the Northern Hemisphere’s autumn equinox, the time of year when young moons are hardest to see. Luckily for all of us on Earth, the moon reaches perigee – its closest point to Earth in its monthly orbit – on September 18, 2020. That means the young moon is traveling away from the sun at its maximum orbital speed on September 18. That’s one reason we’re expecting many diligent observers to catch the young whisker-thin waxing crescent moon – from all parts of the world – at evening dusk on September 18.

To maximize your chances of spotting the young moon on September 18, find an unobstructed horizon in the direction of sunset. If you have them, bring along binoculars. Look westward, near the sunset point on the horizon, for a pale crescent shortly after sundown. Don’t dally, though! The September 18 young moon follows the sun beneath the horizon soon after sundown.

Never fear, though. The young moon will return to the evening sky after sunset on September 19, 20, and 21 as shown on our chart.

Each day, a wider and brighter lunar crescent will appear higher in the sky at sunset and stay out longer after sundown.

Want to know the moon’s setting time for your sky? Click on Sunrise Sunset Calendars, remembering to check the moonrise and moonset box. 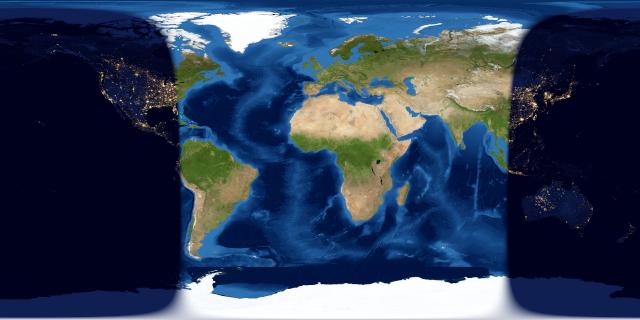 The day and night sides of Earth one day after new moon (September 18, 2020, at 11:00 UTC). The shadow line at right (crossing eastern Asia) shows where the moon will be one day old at sunset. The line of sunset travels westward (leftward), so all places to the west (left) of this shadow line have an older moon at sunset. Map via EarthView.

On the other hand, at sunset on the autumn equinox, the ecliptic hits the horizon at its shallowest angle for the year.

Therefore, all else being equal, the Southern Hemisphere has the upper hand for catching any September young moon. 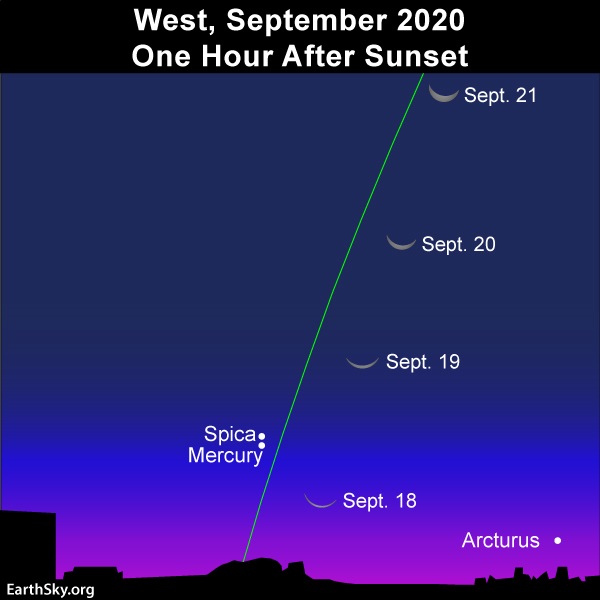 This is the view of the young moon from Valdivia, Chile (40 degrees south latitude). The green line represents the ecliptic, which makes a steep angle with respect to the evening horizon as seen from the southern part of Earth’s globe. The steep angle of the ecliptic will make this young moon a lovely sight for Southern Hemisphere observers. What’s more, from southerly latitudes, skywatchers might glimpse the planet Mercury and the bright star Spica in the constellation Virgo the Maiden. The narrow autumn angle of the ecliptic makes seeing Mecury and Spica unlikely from the Northern Hemisphere.

The planet Mercury and the bright star Spica are in the vicinity of the young moon, but these bright lights will be lost in the afterglow of sunset at northerly latitudes. Since Mercury and Spica lodge to the south of the ecliptic, they’re much easier to view from the Southern Hemisphere. We contrast Philadelphia, Pennsylvania, USA (40 degrees north latitude) with Valdivia, Chile (40 degrees south latitude), both of which reside near the same meridian: 75 degrees west longitude.

Bottom line: After sunset on September 18, 19, 20 and 21, 2020, watch for the waxing crescent moon’s return to the western evening sky. Plus, note the earthshine softly illuminating the dark side of the moon.