On July 20, the bright “star” near the moon is Jupiter 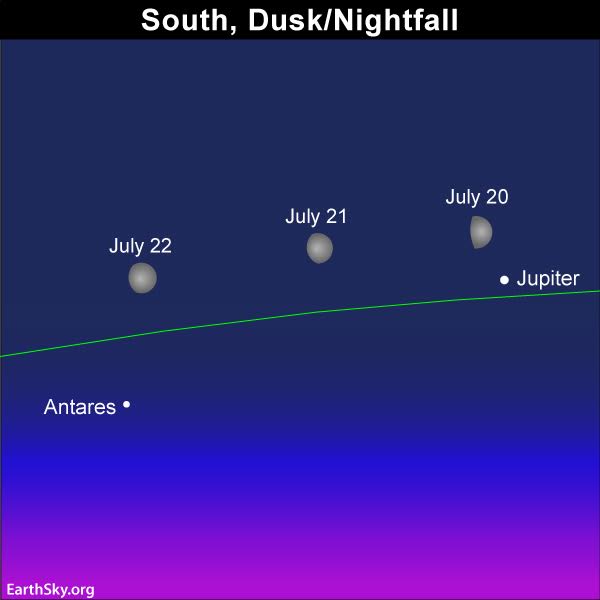 On July 20, 2018, let the moon confirm your sighting of the planet Jupiter, which shines more brightly than any star now, but not as brightly as the red planet, Mars. The moon and Jupiter are particularly close on July 20, but – on July 21 and 22 – you’ll also notice bright Jupiter in the moon’s vicinity. Notice that the moon is moving eastward on the sky’s dome (toward the sunrise direction) from one day to the next. And notice the bright red star Antares, Heart of the Scorpion in the constellation Scorpius. For us in North America, the moon will be closest to Antares on July 22.

The moon moves to the north of Antares by July 22. Although Antares ranks as a first-magnitude star, it nowhere matches Jupiter in brilliance. Jupiter shines some 19 times brighter than Antares, the brightest star in the constellation Scorpius the Scorpion.

The planets Venus and Mars are the only starlike objects to outshine Jupiter in the evening sky, but it’s unlikely that you’ll mistake Jupiter for either Venus or Mars. Venus lights up the western sky as darkness falls, whereas Mars is found over the southeast horizon at nightfall and/or early evening. Jupiter, on the other hand, is found in the vicinity of the moon for these next few days.

On July 20, the moon and Jupiter reside on nearly the same line of sight, but aren’t truly close together in space. The moon, our closest celestial neighbor, is roughly 243,000 miles (391,000 kilometers) away, whereas Jupiter, the 5th planet from the sun, lodges well over 1,900 times the moon’s distance from Earth.

Astronomers generally give the distances to solar system planets in terms of the astronomical unit (AU). One AU equals the mean Earth-sun distance (approximately 93 million miles or 150 million km). At present, Jupiter resides about 5 AU from Earth and 5.4 AU from the sun. For a more precise figure for Jupiter’s present distance (or that any other solar system planet), click here.

As the moon continues its monthly eastward trek in front of the zodiacal constellations, it’ll meet up with the ringed planet Saturn on July 24, and then move into the neighborhood of Mars on July 26 and 27.

Bottom line: As soon as darkness falls on July 20, use the moon to find the dazzling king planet Jupiter nearby. Then, over the new few evenings, the moon can help you identify the bright red star Antares.

Thank you! Your submission has been received!
Oops! Something went wrong while submitting the form.
END_OF_DOCUMENT_TOKEN_TO_BE_REPLACED