Did you see any Eta Aquarid meteors Friday morning? Saturday morning is a good time to watch, too. Try around 3 a.m. until dawn. Be sure to get away from city lights.

Tomorrow before dawn – May 6, 2017 – keep watching for Eta Aquariid meteors to streak the nighttime from about 3 a.m. until dawn. In a dark sky, especially at latitudes in the Southern Hemisphere, the Eta Aquariids can produce up to 20 to 40 meteors per hour, or more. If the moon is out when you’re trying to watch 2017’s shower – assuming you’re watching in the peak post-dawn hours – the moon will likely be low in your western sky. To avoid moon glare, try blocking the moon from your view a hedgerow of trees, or some such thing. Otherwise, you want an open view of sky, to see the most meteors

Want to know when the moon sets in your sky? Click here and remember to check the moonrise and moonset box.

People always want to know about meteor shower radiants. It appears at different heights in the sky depending on your latitude, and the time of night you’re looking. Just be aware … you don’t need to know the whereabouts of the radiant to see the meteors. They’ll appear in any and all parts of the sky.

Still, if you think you’ll enjoy identifying the radiant for the Eta Aquarids, check out the chart below. It shows the sky scene from mid-northern latitudes just before the onset of morning twilight. The Y-shaped “Water Jar” is the most prominent feature in the otherwise inconspicuous constellation Aquarius. This distinctive Y-shaped pattern of stars closely aligns with the radiant point of the Eta Aquariid shower.

Click here for more on the Eta Aquariid radiant and why more Eta Aquarids are visible from more southerly latitudes. 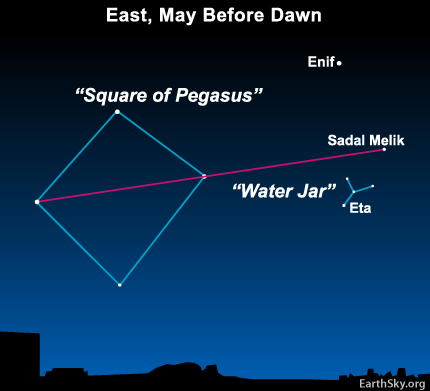 If you’re familiar with the Square of Pegasus, you can star-hop to the radiant of the Eta Aquarid meteor shower. But you don’t have to find a shower’s radiant point to see the meteors. 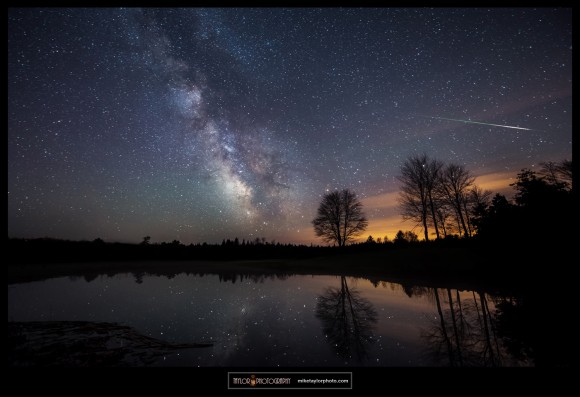 This meteor shower favors the Southern Hemisphere, and the tropical and subtropical latitudes in the Northern Hemisphere. Appreciably north of 40 degrees north latitude (the latitude of Denver, Colorado), the meteors are few and far between. The early morning twilight at far northern latitudes washes these Eta Aquariid meteors from the sky. At this time of the year, morning twilight comes at a later hour to southerly latitudes.

Once again, the best viewing time is roughly from about two hours to one hour before sunrise. Unsure of your sunrise time? Or when nautical twilight begins? Check our almamac page.

No matter where you live, the last hour of darkness just before dawn tends to feature the greatest number of meteors.

Like most meteors in annual showers, the Eta Aquarids are debris left behind by a comet. Every year, as Earth passes through the orbital path of Comet Halley, bit and pieces shed by this comet burn up in the Earth’s atmosphere as Eta Aquariid meteors.

Bottom line: Did you see any Eta Aquarid meteors Friday morning? Saturday morning – May 6, 2017 – is a good time to watch, too. Try around 3 a.m. until dawn. Be sure to get away from city lights.