This image is part of a wider system of depressions that spiral outward from the very center of Mars’ north pole. Seen in context, you can see rippling troughs that curve and bend and slice outwards from the pole counterclockwise. 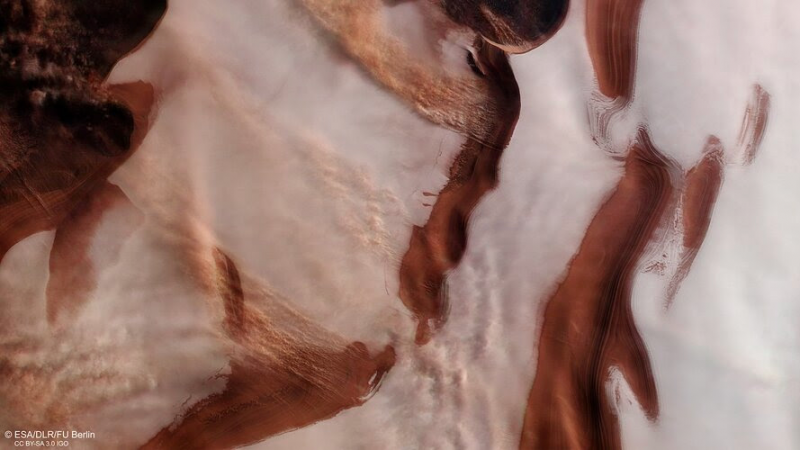 View larger. | )n November 16, 2006 – during orbit 3670 – ESA’s Mars Express captured the data to make this beautiful image of the icy cap at Mars’ north pole. You can see bright swaths of ice, dark troughs and depressions, and signs of strong winds and stormy activity. Image via ESA.

The European Space Agency (ESA) released this image of Mars’ north pole in January 2020, to coincide with the Seventh International Conference on Mars Polar Science and Exploration, which is taking place this week (January 13-17, 2020) in Argentina. ESA’s Mars Express orbiter – second-longest surviving, continually active spacecraft in orbit around a planet other than Earth – captured the image. It shows Mars’ icy north polar cap with bright swaths of ice, dark troughs and depressions, and signs of strong winds and stormy activity. ESA described the image this way:

Dark red and ochre-hued troughs appear to cut through the ice cap. These form part of a wider system of depressions that spiral outwards from the very center of the pole. When viewed on a larger scale [as in the map below] … this pattern becomes evident: the rippling troughs curve and bend and slice outwards in an anti-clockwise orientation, wrapping around the pole and creating a pattern akin to zebra stripes.

These spiralling features are thought to have formed via a mix of processes, the most significant one being wind erosion. It is thought that winds circle radially away from the center of the north pole, moving outwards cyclically to create the spiral pattern we see.

Read more about the image above from ESA. 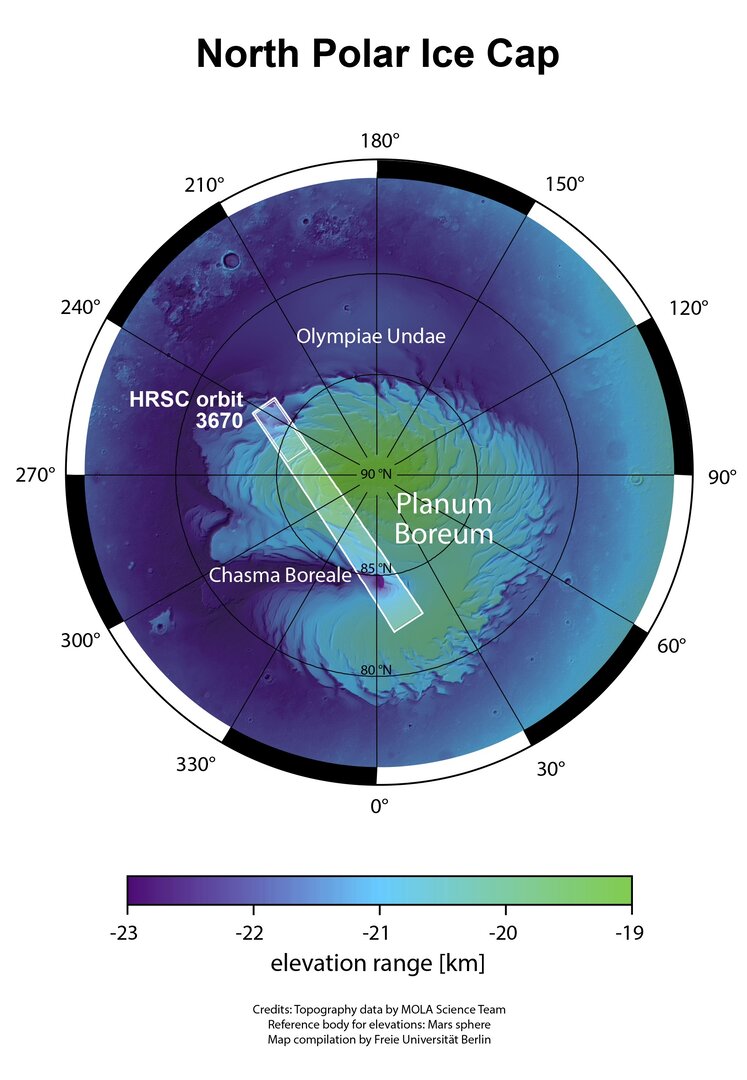 Like Earth, Mars has four seasons, with opposite seasons occuring simultaneously in the planet’s northern and southern hemispheres. In northern summer on Mars, ESA said:

… the north pole is permanently covered by thick layers of mostly water ice; during winter, temperatures plummet below -125 degrees Celsius and carbon dioxide begins to precipitate and build up as ice, creating a thinner additional layer a couple of meters thick. Winter also brings carbon dioxide clouds, which can obscure the polar features below and make it difficult to see clearly from orbit.

You can also see the image in 3-D (below) if you have red-green or red-blue glasses: 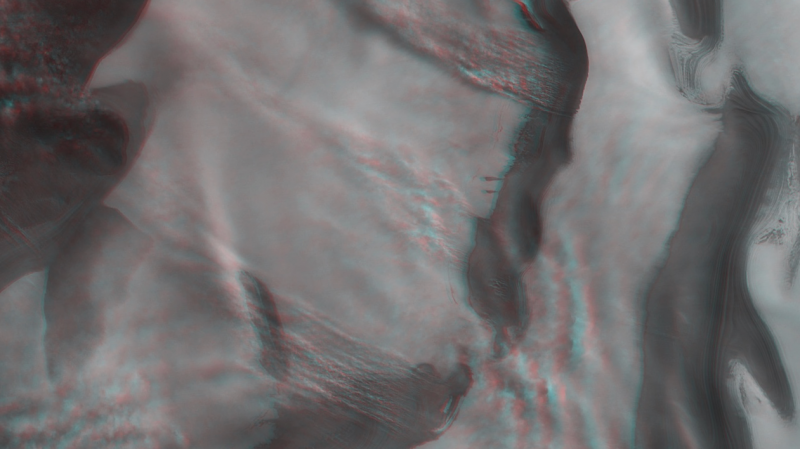 View larger. | This image shows shows part of the ice cap at Mars’ north pole in 3D when viewed using red-green or red-blue glasses. This anaglyph was derived from data obtained by the nadir and stereo channels of the High Resolution Stereo Camera (HRSC) on ESA’s Mars Express during spacecraft orbit 3670. It covers a part of the Martian surface centered at about 244°E/85°N. North is to the upper right. Image via ESA.

ESA’s Mars Express was the first planetary mission attempted by the agency. It consisted of both a Mars Express Orbiter and Beagle 2, a lander designed to perform exobiology and geochemistry research. Although the lander failed to fully deploy after it landed on Mars’ surface, the orbiter arrived at Mars in 2003 and has been successfully performing scientific measurements since early 2004. It is now the second-longest surviving, continually active spacecraft in orbit around a planet other than Earth, behind only NASA’s still active 2001 Mars Odyssey.

Bottom line: A beautiful 2006 image from ESA’s Mars Express orbiter, released earlier this month to coincide with the Seventh International Conference on Mars Polar Science and Exploration, happening this week (January 13-17, 2020) in Argentina.