Mystery of the moon’s tilted orbit

Had things gone differently in the early days of the inner solar system, the magnificent spectacle of a total solar eclipse might be a monthly event. 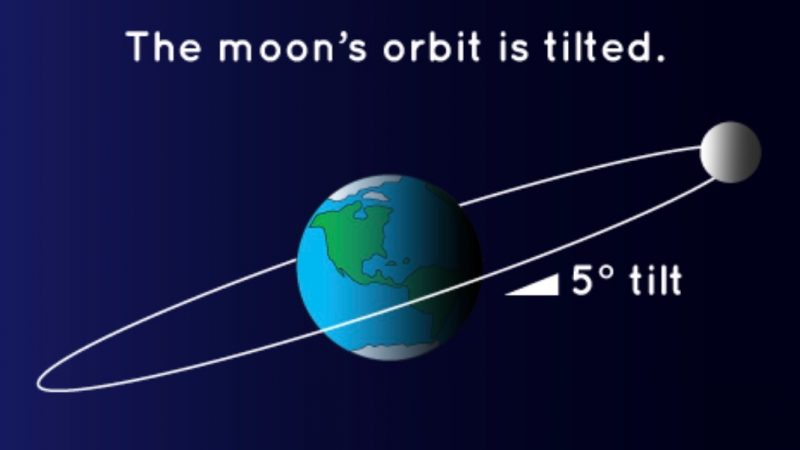 Illustration of the tilt of the moon’s orbit, with respect to the Earth-sun plane. It’s why we don’t have lunar and solar eclipses every month. Not to scale. Image via NASA SpacePlace.

By Graham Jones of tensentences.com

The coming total solar eclipse of August 21, 2017 – seems certain to inspire a new generation of eclipse chasers. After that eclipse, when is the next one? Rather a long time, it turns out. Apart from four partial eclipses, mostly taking place at extreme southerly or northerly latitudes, we have to wait until July 2, 2019 for the next total solar eclipse, which cuts across Chile and Argentina and ends at sunset to the south of Buenos Aires.

This raises a question: why? Since the moon orbits Earth once a month (to be precise, it passes between the Earth and sun every 29.53 days), why don’t we have 12 or 13 eclipses every year? I organize solar eclipse workshops for students, and this question has proven thought-provoking. The easy answer is that the moon’s orbit around Earth is tilted, by five degrees, to the plane of Earth’s orbit around the sun. As a result, from our viewpoint on Earth, the moon normally passes either above or below the sun each month at new moon.

But there’s a deeper question: why is the moon’s orbit tilted? Students are often surprised to learn that we don’t have a definite answer to this question. In fact, it’s a puzzle known as the lunar inclination problem.

In late 2015, two planetary scientists – Kaveh Pahlevan and Alessandro Morbidelli – published an elegant solution. They had run computer simulations to look at the effect of collisionless encounters (near-misses) between the Earth-moon system and large objects, similar to what we today call asteroids, leftover from the formation of the inner planets. Their results – published in the peer-reviewed journal Nature – showed that these objects could have gravitationally jostled the moon into a tilted orbit. 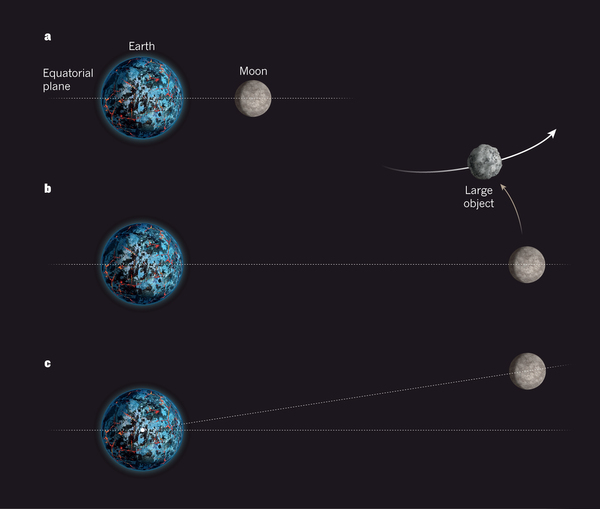 a. The formation of the moon in the equatorial plane of the Earth. b. The expansion of moon’s orbit and collisionless encounter with a large inner solar system body. c. The cumulative effect of many such encounters have inclined the orbital plane of the moon relative to the Earth. Image via Canup, R. (2015) Nature, 527(7579), 455-456/ AstroBites. Not to scale)

Some of these large objects would have eventually collided with Earth – and this provides an answer to another puzzle. When Earth formed, precious metals such as platinum and gold would have been carried down to our planet’s iron core. (Precious metals are siderophile, which means iron-loving.) Yet platinum and gold can be found at Earth’s surface in relatively high amounts, which suggests they were delivered to Earth later on.

And so Pahlevan and Morbidelli’s large objects become multi-taskers. First, through collisionless encounters, they jostle the moon into a tilted orbit. Next, by crashing into the earth, they deliver precious metals. Robin Canup, another planetary scientist, highlighted the significance of this dual role in another Nature article, when she wrote:

Had such a population of objects not existed, the moon might be orbiting in Earth’s orbital plane, with total solar eclipses occurring as a spectacular monthly event. But our jewellery would be much less impressive – made from tin and copper, rather than from platinum and gold.

Kaveh Pahlevan is currently based at the School of Earth and Space Exploration at Arizona State University. I asked him about his work – beginning with two questions from students at my eclipse workshops. That is, people are often surprised to learn that there’s much about the moon we don’t fully understand, including the question of how it formed. As one student asked:

We’ve done a flyby of Pluto; we’ve discovered exoplanets; we study distant galaxies, quasars and black holes. So how is it possible that we still don’t know for certain about the moon?

If you had lived in the 17th or 18th century, you would have made the same observation about the origin of living things: we had circumnavigated the globe; we had discovered distant lands and seas, with flora and fauna we had never imagined; yet we still didn’t understand the origin of species. It is easier to take an inventory of what is observable today than to try to infer origin events which happened long ago and which are not observable.

When a crime happens, investigative police quickly arrive on the scene and try to preserve the evidence. In the case of the moon’s origin, there was a violent event, but there were no witnesses, and we are arriving on the scene five billion years late! Most of the evidence of this event has been obliterated over the ensuing aeons. We have to look at the few remaining pieces of evidence to try to put together a story. It’s a challenge. But it’s a part of our own origin story, and that’s what’s captivating.

When (if ever) will we be able to point to a definitive answer about how the Earth-moon system formed? Pahlevan said:

Developments are seldom definitive. In order to make progress, we have to acknowledge our ignorance. Even when we have ideas that seem to have some explanatory power, we maintain them alongside some doubt, and acknowledge that they might be wrong. It is human to want to have stories with explanatory power: this is the source of origin myths the world over. But with our scientific origin theories, we have learned that they are always tentative. We have to be aware of the limitations of our knowledge if we are to make progress.

One area that is promising for progress involves sample data. The Apollo astronauts brought back nearly 400 kilograms [nearly 900 pounds] of lunar rocks during their brief lunar sojourns in the 1960s and ’70s. The technology to analyze the composition of these rocks has improved enormously in the intervening half-century. So we are now able to tease out some signals from the lunar rocks that we couldn’t before.

This is exciting because the atoms in the lunar rocks – the atoms in the moon – were there during the lunar origin event and, in some sense, they are witnesses to what happened. Using the newly available signatures that are recorded in these samples to test and develop our ideas is an area that’s ripe for progress. 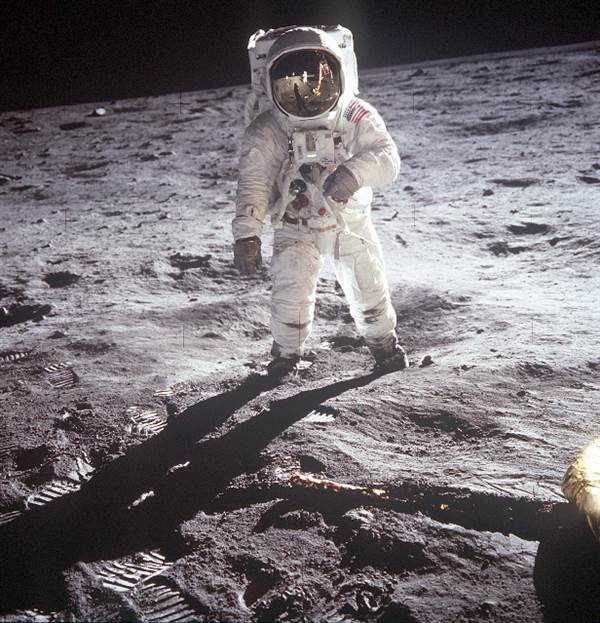 Thanks to the Apollo missions to the moon, scientists can analyze moon rocks. In some sense, Kaveh Pahlevan said, “… they are witnesses to what happened.”

Pahlevan’s 2015 paper with Alessandro Morbidelli looks at the effect of the collisionless encounters that preceded collisions between the Earth and other bodies in the inner solar system. I asked Pahlevan how he and Morbidelli originally thought of this idea, and later developed it. He said:

Several years ago, I attended a conference in Ascona, Switzerland, in which Dr. Morbidelli gave a talk about the formation of the terrestrial planets. He mentioned that the moon-forming impact may have been the last giant impact in the formation history of the Earth, perhaps because earlier-generated satellites would have been gravitationally lost via encounters with other massive bodies in the inner solar system, which was a very crowded place at the time. I knew that the lunar inclination was an open scientific problem, and it was there that the seeds for this project were planted. I went home and did some calculations.

I later approached Dr. Morbidelli at another conference about applying collisionless encounters to the lunar inclination problem, and he expressed interest in the idea and invited me to Nice, France, in 2012 to work on this project. Dr Morbidelli has a fluency with numerical integrations that is very rare, so once the idea was in place, things progressed quickly and it became immediately clear that there was potential there.

Some professional astronomers spend all their time in front of a computer and never actually look up at the sky. You are a planetary scientist, not an astronomer, but do you ever spend time gazing up at the objects of your study?

I’m a theorist so I don’t spend much time at telescopes or in places where the sky is dark. Sometimes, when we’re outside, my non-scientist friends ask me ‘Where is the moon?’ I have no idea where it is. But sometimes, when I’m going about my day, I do notice it in the sky. It’s a reminder to get back to work. 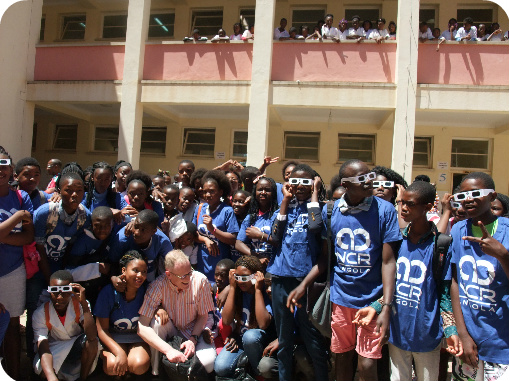 Graham Jones, who wrote this article, organizes solar eclipse workshops for students via tensentences.com. Graham will be presenting live coverage of the August 21 eclipse on timeanddate.com.

Bottom line: The five-degree tilt of the moon’s orbit – which is the reason solar eclipses are rare events – has recently been explained by collisionless encounters (near-misses) between the Earth-moon system and large objects leftover from the formation of the inner solar system.