The BepiColombo mission to our sun’s innermost planet – fascinating little Mercury – launches from Europe’s spaceport in French Guiana on October 20 at 01:45 UTC (tonight at 9:45 p.m. EDT). Here’s how to watch.

This animation visualizes BepiColombo’s launch and cruise to Mercury. Some aspects have been simplified for the purpose of the animation.

The BepiColombo space probe to the planet Mercury is scheduled to launch on October 20, 2018 at 01:45 UTC (October 19 at 9:45 p.m. EDT; translate UTC to your time) from the European spaceport in Kourou, French Guiana. BepiColombo will study the composition, geophysics, atmosphere, magnetosphere and history of Mercury, the sun’s innermost planet and least explored planet in the inner solar system. Watch the launch live here.

BepiColombo is a joint mission between the European Space Agency (ESA) and the Japan Aerospace Exploration Agency (JAXA), carried out under ESA leadership.

Mercury is a fascinating place to explore. It’s not much larger than Earth’s moon. Early astronomers called Mercury the moon of the sun because, for hundreds of years, it was thought to keep a single face toward the sun, much as our moon keeps one face toward Earth. Now we know it does spin under the nearby sun’s fierce light and heat, rotating exactly 1 1/2 times each time it goes around the sun. That means it turns one face toward the sun in one orbit, and the other face toward the sun in the next orbit, making the day on Mercury twice as long as its year. Mercury doesn’t have much of an atmosphere to trap heat. So temperatures on the surface range wildly. It can go down to -279 degrees Fahrenheit (-173 degrees Celsius) at night, then back to 801 F (427 C) during the day … hot enough to melt lead!

The BepiColombo mission consists of two spacecraft: the Mercury Planetary Orbiter (MPO), which was constructed by ESA, and the Mercury Magnetospheric Orbiter (MMO), which was constructed by JAXA. Both spacecraft will fly to Mercury together as a coupled system, but will be put into separate orbits upon arrival in 2025. The MMO will investigate the magnetospheric interaction between the planet and the solar wind, while the MPO will be put onto a lower orbit which is optimal for carrying out remote sensing of the planet’s surface. 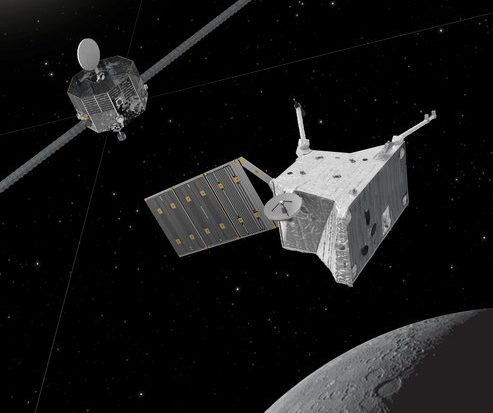 BepiColombo is the first Mercury mission to send 2 science orbiters to make complementary measurements of the planet’s dynamic environment at the same time. Image via ESA.

Little Mercury, so near the sun, is not an easy world to reach. BepiColombo will fly past Venus twice and past Mercury six times in order to decelerate. Otherwise, the probe would plunge into the sun.

The difficulty in getting there is one reason the space probe’s journey to Mercury will take seven years. It’ll be the first major exploration of this little world since the wonderful MESSENGER mission, which mapped the planet, only ending its mission when it ran out of fuel and ultimately crashed into Mercury in 2015.

Peter Wurz is a space researcher from the University of Bern and part of the ESA’s science advisory group which designed the BepiColombo mission. He said in a statement:

The maneuver to bring the probe into orbit around Mercury will take place last; this is carried out through chemical propulsion. Our nerves will probably be pretty taut.

Once BepiColombo has achieved its intended orbit, data transmission to Earth will take approximately 15 minutes. Ultimately, the scientific investigations and experiments on Mercury should take one to two years.

Bill Nye, CEO of The Planetary Society, said in a statement:

The BepiColombo mission to Mercury will take us to the planet closest to the sun — the planet that helped us prove that relativity is real, the planet that is astonishingly hot on its sun-side and yet carries ice in craters at its North Pole. This wonderful spacecraft will let us learn more about how the solar system began, where we all came from, and how, on our own planet, you and I came to be. 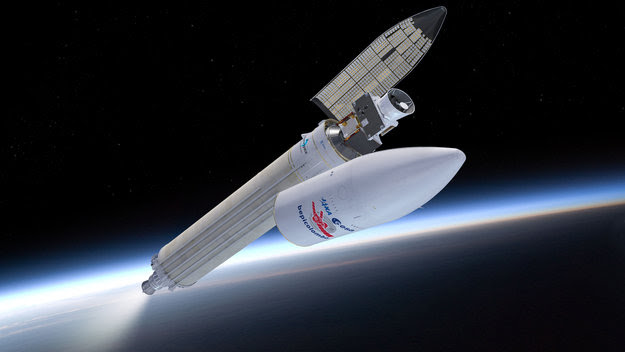 Artist’s concept of release of BepiColombo spacecraft. Image via ESA.

Bottom line: Here’s how to watch the October 19-20, 2018 launch of the BepiColombo mission to Mercury.