From pulsar to magnetar? Or vice versa?

Since the 1970s, scientists have treated pulsars and magnetars as 2 distinct populations of objects. Now they think they might be stages in a single object’s evolution. A new NASA ScienceCast has more.

A neutron star is a formerly large star that has run out of fuel and exploded as a supernova. As gravity forces the star to collapse to the size of a small city, the star becomes so dense that a single teaspoon of the collapsed star would have as much mass as a mountain. The star’s core, now a neutron star, can be rotating as fast as 10 times a second or more. Over time the rotation of the core can start speeding up by pulling matter from its surroundings, rotating over 700 times a second!

Since the 1970s, scientists have treated pulsars and magnetars as two distinct populations of objects. But, in the last decade, evidence has emerged that shows they might sometimes be stages in the evolution of a single object. Neutron stars and magnetars might just be two sides of the same coin – first it’s a radio pulsar and later becomes a magnetar. Or maybe it’s the other way around.

Some scientists argue that objects like magnetars gradually stop emitting X-rays and gamma rays over time. Others propose the opposite theory: that the radio pulsar comes first and then, over time, a magnetic field emerges from the neutron star causing those magnetar-like outbursts to start.

No one knows for sure which scenario is correct, but this is an active area of study among astronomers. The NASA video above – released on May 30, 2018 – has more. 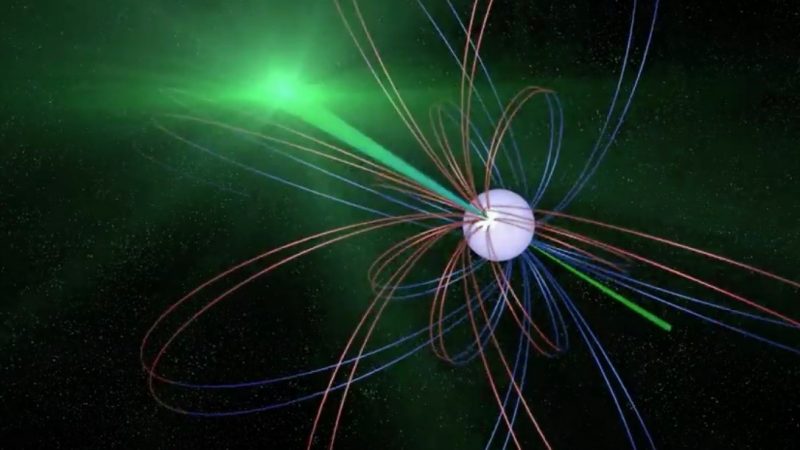 Artist’s concept of a radio pulsar, via NASA ScienceCast.

Bottom line: Radio pulsars and magnetars might be two sides of the same coin, that is, two stages in the life of a single object.