Don’t believe the moon landings were real? Go ahead. Watch this.

In the video above, filmmaker SG Collins explains why the Apollo moon landings on the moon in the late 1960s and early ’70s couldn’t have been faked. He’s talking about it from a filmmaker’s point of view, so he doesn’t try to debunk the many arguments conspiracy theorists have put forth to “prove” we didn’t go to the moon. He just explains why it wouldn’t have been possible to fake it, from the standpoint of the footage on the moon itself.

The History.com page leaves out one of the biggest arguments conspiracy theorists always pull out while claiming we didn’t really go to the moon. That is the argument that the astronauts “could not possibly” have made it through the dangerous Van Allen radiation belts surrounding Earth. And yet they did survive, and, in fact, radiation dosimeters carried by Apollo astronauts showed their total dosage for the entire trip to the moon and return was not more than 2 rads over six days (you’d need a dose of over 100 rads to cause immediate acute effects from radiation poisoning; doses over 1,000 rads are nearly always fatal). Basically, they survived because they went through fast, along a path designed to give them as little exposure to radiation as possible. NASA provides a detailed answer to the question of how it was possible for the astronauts to survive the journey through that realm of space in a pdf titled The Deadly Van Allen belts?

Want more? Listen in, as the first humans land on the moon 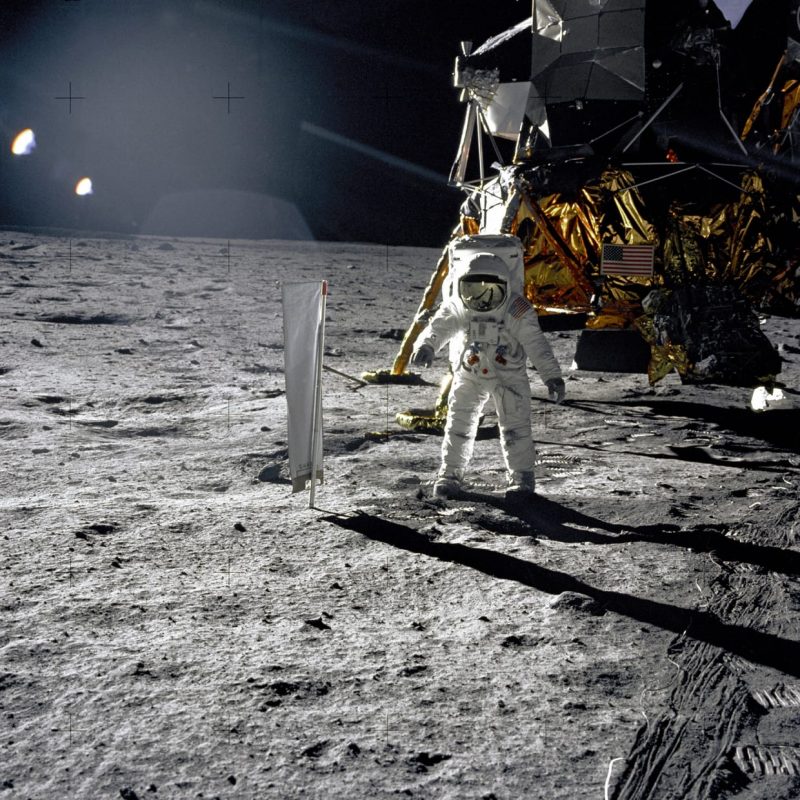 Image from the Apollo 11 moon landing. Conspiracy theorists often claim the moon landings were “faked” because the shadows in the pictures “aren’t right;” on the moon, where there’s no air, those objects in shadow “shouldn’t be visible,” they claim. That would be true if the sun were the only source of illumination in the pictures. But it wasn’t. On the day of the first moon landing – July 20, 1969 – a crescent moon was visible in Earth’s sky. Because the moon and Earth are mirrors to each other in space, that means a nearly full Earth would have been visible in the sky from the moon. That nearly full Earth would have cast a lot of light on the moon, just as a nearly full moon casts light on an earthly landscape … you know how you can see your shadow at night, when there’s a bright moon in the sky? On July 20, 1969 – and in the days following that – earthlight would have scattered into the shadows on the moon, disproving the claims of conspiracy theorists.

Bottom line: A video from filmmaker SG Collins – and some other thoughts – on why the Apollo moon landings could not have been faked.