Two planets destined to die as their star expands

You know how our sun will someday swell to a red giant, swallowing the planets Mercury and Venus? These two distant exoplanets will suffer a similar fate. 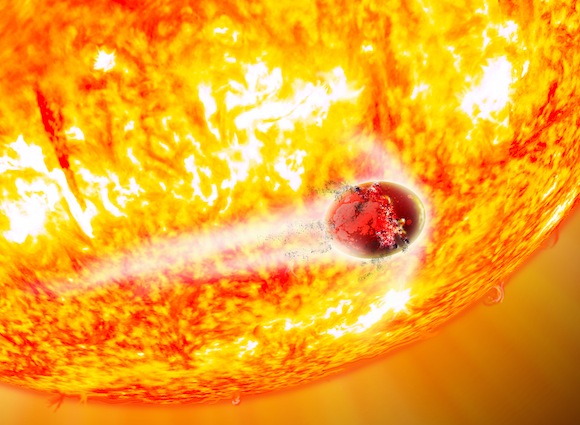 View full size. In this artist’s conception, the doomed world Kepler-56b is being tidally shredded and consumed by its aging host star. Credit: David A. Aguilar (CfA)

We’ve known for decades that our sun will someday swell into a red giant star, swallowing the inner planets Mercury and Venus within its outer layers. That’ll happen billions of years from now. But our solar system isn’t the only one destined to lose planets to its aging star. Astronomers say that they now know of two distant exoplanets – Kepler-56b and Kepler-56c – that will be swallowed by their star in a relatively short time, on an astronomical timescale. Their ends will come in 130 million and 155 million years, respectively. Lead author Gongjie Li of the Harvard-Smithsonian Center for Astrophysics (CfA) presented this research yesterday (June 2, 2014) at the meeting in Boston of the American Astronomical Society, which is going on now. She said:

As far as we know, this is the first time two known exoplanets in a single system have a predicted time of death.

The star Kepler-56 is becoming a red giant star now. It has already ballooned out to four times the size of our sun. As it continues to age, it will continue to expand further and further outward. Not only will the star grow larger, but its gravitational tides will get stronger, dragging these distant worlds inward to their eventual doom.

Both Kepler-56b and Kepler-56c are much closer to their star than Mercury. The first planet orbits its star in only 10.5 days, and the second orbits every 21.4 days. Before they’re submerged beneath the outer layers of their star, the two planets will be subjected to immense heating from the star. Their atmospheres will begin to boil off, and the planets themselves will be stretched into egg shapes by their star’s gravity.

The only known survivor in this distant solar system will be Kepler-56d, a gas giant planet circling in a 3.3-Earth-year orbit.

Read more about the pending deaths of these two exoplanets, via Harvard CfA