The Great Red Spot has been swirling wildly over Jupiter for the past 150 years, but scientists still aren’t sure what causes the gigantic storm’s reddish hues. 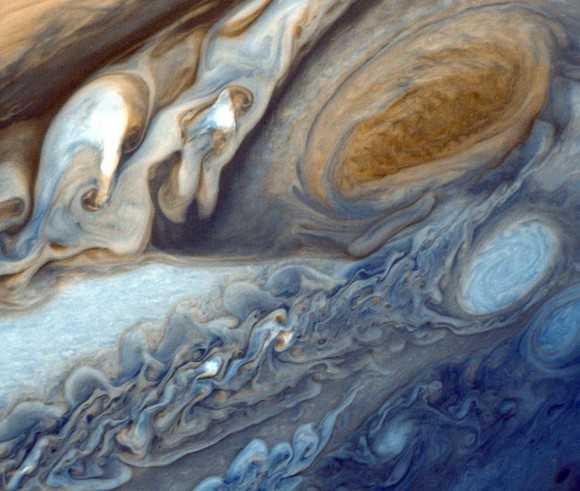 The largest and most powerful hurricanes ever recorded on Earth spanned over 1,000 miles across with winds gusting up to around 200 mph. That’s wide enough to stretch across nearly all U.S. states east of Texas. But even that kind of storm is dwarfed by the Great Red Spot, a gigantic storm in Jupiter. There, gigantic means twice as wide as Earth.

With tumultuous winds peaking at about 400 mph, the Great Red Spot has been swirling wildly over Jupiter’s skies for the past 150 years — maybe even much longer than that. While people saw a big spot in Jupiter as early as they started stargazing through telescopes in the 1600s, it is still unclear whether they were looking at a different storm. Today, scientists know the Great Red Spot is there and it’s been there for a while, but they still struggle to learn what causes its swirl of reddish hues. 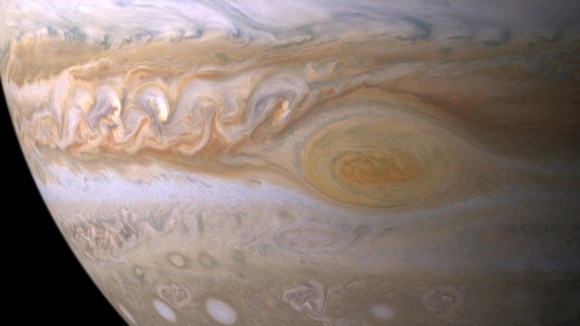 Trapped between two jet streams, the Great Red Spot is an anticyclone swirling around a center of high atmospheric pressure that makes it rotate in the opposite sense of hurricanes on Earth. Image credit: NASA/JPL/Space Science Institute

Understanding the Great Red Spot is not easy, and it’s mostly Jupiter’s fault. A planet a thousand times as big as Earth, Jupiter consists mostly of gas. A liquid ocean of hydrogen surrounds its core, and the atmosphere consists mostly of hydrogen and helium. That translates into no solid ground like we have on Earth to weaken storms. Also, Jupiter’s clouds obstruct clear observations of its lower atmosphere. While some studies of Jupiter have investigated areas in its lower atmosphere, orbiting probes and telescopes studying the Great Red Spot can only see clouds scattered high in the atmosphere.

Amy Simon, an expert in planetary atmospheres at NASA’s Goddard Space Flight Center in Greenbelt, Maryland, said learning more about Jupiter and its Great Red Spot could help scientists understand Earth’s weather system better. Jupiter’s weather functions under the same physics as Earth, she said, just millions of miles farther from the sun. Simon also said Jupiter studies could improve our understandings of worlds beyond our solar system. She said:

If you just look at reflected light from an extrasolar planet, you’re not going to be able to tell what it’s made of. Looking at as many possible different cases in our own solar system could enable us to then apply that knowledge to extrasolar planets.

Studies predict Jupiter’s upper atmosphere has clouds consisting of ammonia, ammonium hydrosulfide, and water. Still, scientists don’t know exactly how or even whether these chemicals react to give colors like those in the Great Red Spot. Plus, these compounds make up only a small part of the atmosphere. Simon said:

We’re talking about something that only makes up a really tiny portion of the atmosphere. That’s what makes it so hard to figure out exactly what makes the colors that we see.

The leading theory is that deep under Jupiter’s clouds, a colorless ammonium hydrosulfide layer could be reacting with cosmic rays or UV radiation from the sun. But Simon said many chemicals turn red under different situations. She said:

That’s the problem. Is it turning the right color red? Under the right conditions, ammonium hydrosulfide might be.

With the Great Red Spot and other reddish parts of Jupiter, coloring may result from multiple factors, as opposed to just ammonium hydrosulfide. Simon said:

Ideally, what you’d want is a mixture with the right components of everything that you see in Jupiter’s atmosphere at the right temperature, and then irradiate it at the right levels.

Bottom line: Jupiter’s Great Red Spot has been swirling wildly over the planet for the past 150 years, but scientists still aren’t sure what causes the gigantic storm’s reddish hues.