This NASA animation depicts a rare type of supernova known as a fast-evolving luminous transient, or FELT. NASA’s Kepler space telescope – originally designed as a planet-hunter – has found such an object. Image via NASA/JPL-Caltech.

Supernovae, or exploding stars, mark the end of life for the most massive stars, and astronomers estimate that – over the vast space of our universe – a star explodes as a supernova once every second. But, even with telescopes, astronomers don’t see these explosions very often. After exploding into a brilliance so intense that, briefly, a supernova can outshine an entire galaxy, it fades again in a relatively brief time, a blink on a cosmic timescale, typically weeks. In the past decade, astronomers have puzzled over an explosive event that fades even faster than that. These events are called Fast-Evolving Luminous Transients (FELTs). Only a few FELTs have been seen in telescopic sky surveys because they are so brief, only a few days. But now the world’s most powerful planet-hunter – NASA’s Kepler Space Telescope – has caught a FELT in the act.

Launched in 2009 into an Earth-trailing heliocentric orbit, Kepler single-handedly discovered thousands of exoplanets and exoplanet candidates (click here for an exact number). Nowadays, when you hear of a distant planet – a world in another solar system – being studied by this or that research team, there’s a good chance Kepler made the original discovery. Kepler had a 3.5 year mission initially, and that mission was extended to 2016. But the spacecraft’s reaction wheels began to fail in 2012, and NASA had to modify the plan to a secondary mission it calls K2. Now the great planet-hunter continues to find exoplanets, though not nearly at as fast a rate as before. And the spacecraft has turned its unique capabilities to other things, for example, capturing the properties of the blast of a FELT.

Using the data collected by Kepler, astronomers have concluded that a FELT is:

… a new kind of supernova that gets a brief turbo boost in brightness from its surroundings.

Astronomers said in a statement:

Kepler’s ability to precisely sample sudden changes in starlight has allowed astronomers to quickly arrive at this model for explaining FELTs, and rule out alternative explanations.

Researchers conclude that the source of the flash is from a star after it collapses to explode as a supernova. The big difference is that the star is cocooned inside one or more shells of gas and dust. When the tsunami of explosive energy from the blast slams into the shell, most of the kinetic energy is immediately converted to light. The burst of radiation lasts for only a few days — one-tenth the duration of a typical supernova explosion.

Over the past decade several FELTs have been discovered with timescales and luminosities not easily explained by traditional supernova models. And, only a few FELTs have been seen in sky surveys because they are so brief. Unlike Kepler, which collects data on a patch of sky every 30 minutes, most other telescopes look every few days. Therefore they often slip through undetected or with only one or two measurements, making understanding the physics of these explosions tricky.

In the absence of more data, there have been a variety of theories to explain FELTs: the afterglow of a gamma-ray burst, a supernova boosted by a magnetar (neutron star with a powerful magnetic field), or a failed Type Ia supernova.

Then along came Kepler with its precise, continuous measurements that allowed astronomers to record more details of the FELT event.

The science team’s study appears in the March 26, 2018, online issue of the peer-reviewed journal Nature Astronomy.

View larger. | The evolution of a Fast-Evolving Luminous Transient (FELT), a rare, intense supernova where a star dies 10 times faster than an ordinary supernova. Image via NASA.

We collected an awesome light curve. We were able to constrain the mechanism and the properties of the blast. We could exclude alternate theories and arrive at the dense-shell model explanation. This is a new way for massive stars to die and distribute material back into space.

With Kepler, we are now really able to connect the models with the data. Kepler just makes all the difference here. When I first saw the Kepler data, and realized how short this transient is, my jaw dropped. I said, “Oh wow!”

David Khatami of the University of California at Berkeley said:

The fact that Kepler completely captured the rapid evolution really constrains the exotic ways in which stars die. The wealth of data allowed us to disentangle the physical properties of the phantom blast, such as how much material the star expelled at the end of its life and the hypersonic speed of the explosion. This is the first time that we can test FELT models to a high degree of accuracy and really connect theory to observations.

The Kepler observations indicate that the star ejected the shell less than an earthly year before it went supernova. If so, these astronomers said, the FELTs apparently come from stars that undergo “near-death experiences,” belching out shells of matter in mini-eruptions just before dying, before exploding entirely. 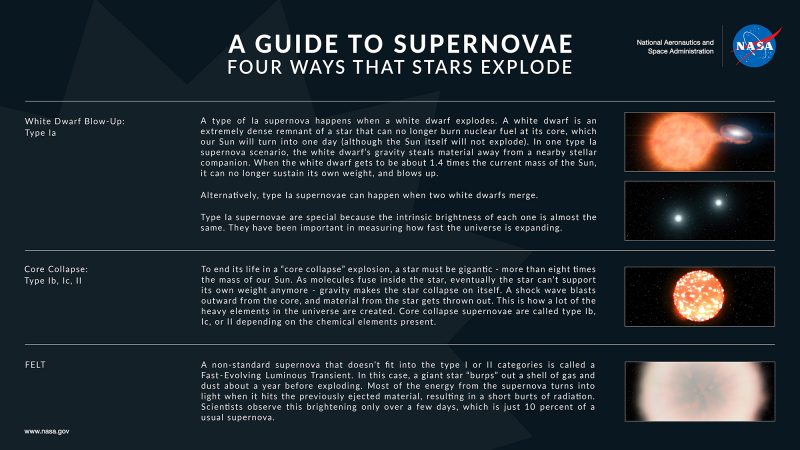 Bottom line: In the past decade, astronomers have puzzled over an explosive event that fades in only days. These events are called Fast-Evolving Luminous Transients (FELTs). Now the world’s most powerful planet-hunter – NASA’s Kepler Space Telescope – has caught a FELT in the act.