Super-Earths likely to have oceans and continents

Massive terrestrial exoplanets – planets outside our solar system – called “super-Earths,” are known to be common in our Milky Way galaxy. New research from a Northwestern University astrophysicist and a University of Chicago geophysicist suggests a super-Earth is more likely to have an Earth-like climate than has been previously thought. 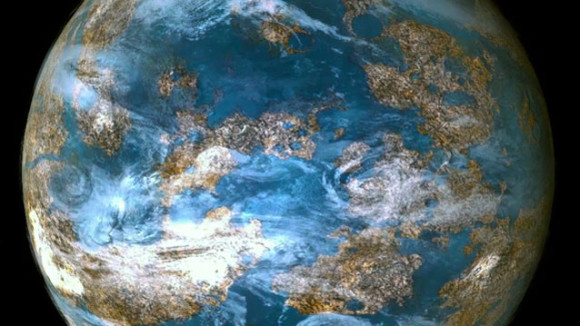 Artist’s impression of an alien “Earth.” Still image from video courtesy of Kepler/NASA.

The new model challenges the conventional wisdom which says super-Earths would be very unlike Earth, that each would be a waterworld, with its surface completely covered in water. The new research concludes that, instead, most super-Earths store most of their water in the mantle and thus will have both oceans and exposed continents, enabling a stable climate such as Earth’s.

The researchers – Nicolas B. Cowan, postdoctoral fellow at Northwestern’s Center for Interdisciplinary Exploration and Research in Astrophysics and Dorion Abbot, assistant professor in geophysical sciences at University of Chicago – presented their findings this week at the annual meeting of the American Astronomical Society (AAS) in Washington, D.C. The study appears in the January 20 issue of the Astrophysical Journal.

In their model, Cowan and Abbot treated the intriguing exoplanets like Earth, which has quite a bit of water in its mantle, the rocky part that makes up most of the volume and mass of the planet. The rock of the mantle contains tiny amounts of water, which quickly adds up because the mantle is so large. And a deep water cycle moves water between oceans and the mantle.

Water is constantly traded back and forth between the ocean and the rocky mantle because of plate tectonics, Cowan and Abbot say. The division of water between ocean and mantle is controlled by seafloor pressure, which is proportional to gravity. As the size of the super-Earths increase, gravity and seafloor pressure also go up.

The ability of super-Earths to maintain exposed continents is important for planetary climate. On planets with exposed continents, like Earth, the deep carbon cycle is mediated by surface temperatures, which produces a stabilizing feedback.

Bottom line: New research from Northwestern University and University of Chicago suggests that super-Earths -massive terrestrial planets outside our solar system – have oceans and continents and are more likely to have an Earth-like climate than has been previously thought.