Eureka! After decades of puzzling about whether the sun’s core spins faster than its surface, astronomers can now measure it. 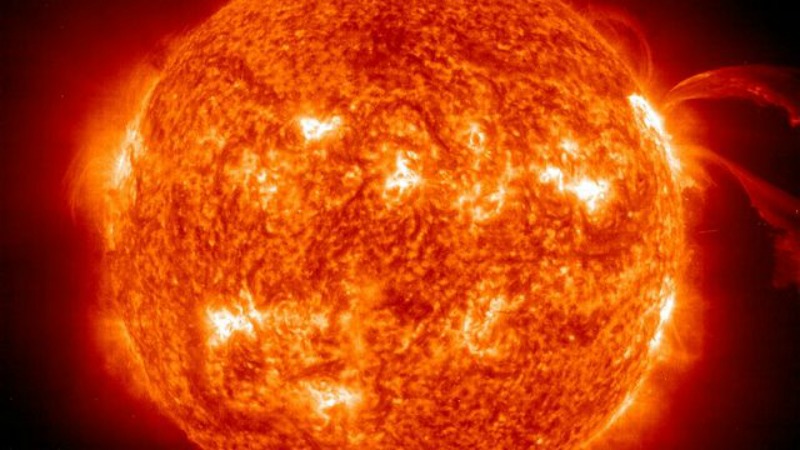 Our local star, the sun. Image via UCLA.

Our star, the sun, isn’t a solid body but instead a huge, shining ball of gas. Astronomers have long known it doesn’t rotate, or spin, as a single rigid mass. They’ve known, for example, that gases in the sun’s outer layers move around at different speeds depending on their latitude, with the equator spinning faster than the higher latitudes. The rotation of the sun’s outer layers varies from 25 days at the equator to 35 days at the poles. But what of the sun’s core? For decades, scientists have suspected the core moves faster than the surface, but, until now, no measurement was possible. Now an international team of astronomers, using data from a long-lived spacecraft called the Solar and Heliospheric Observatory (SoHO), has measured the rotation of the sun’s core and found it rotates nearly four times faster than the surface. The sun’s core spins once in about an earthly week, these researchers said. The study is published August 1, 2017 in the peer-reviewed journal Astronomy and Astrophysics. 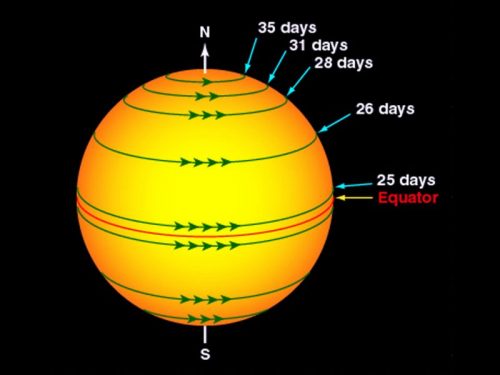 Scientists knew the outer part of the sun rotates at varying speeds, with gases nearer the equator moving around faster. But the sun’s core rotation had remained elusive for decades. Image via NASA.

These researchers – led by astronomer Eric Fossat of the Observatoire de la Côte d’Azur in Nice, France – studied acoustic waves, essentially sound waves, in the sun’s atmosphere. These are longitudinal waves; that is, the waves have the same direction of vibration as their direction of travel, and they move at the speed of sound. A statement from the European Space Agency explained more:

Just as seismology reveals Earth’s interior structure by the way in which waves generated by earthquakes travel through it, solar physicists use ‘helioseismology’ to probe the solar interior by studying sound waves reverberating through it. On Earth, it is usually one event that is responsible for generating the seismic waves at a given time, but the sun is continuously ‘ringing’ owing to the convective motions inside the giant gaseous body.

Higher frequency waves, known as pressure waves (or p-waves), are easily detected as surface oscillations owing to sound waves rumbling through the upper layers of the sun. They pass very quickly through deeper layers and are therefore not sensitive to the sun’s core rotation.

Conversely, lower frequency gravity waves (g-waves) that represent oscillations of the deep solar interior have no clear signature at the surface, and thus present a challenge to detect directly.

Scientists had been searching for these elusive gravity waves in the sun for over 40 years, the ESA statement said, and although earlier attempts have hinted at detections, none were definitive.

This new study represents scientists’ success at unambiguously extracting the signature of the gravity waves, and thus being able to measure how fast the sun’s core rotates. 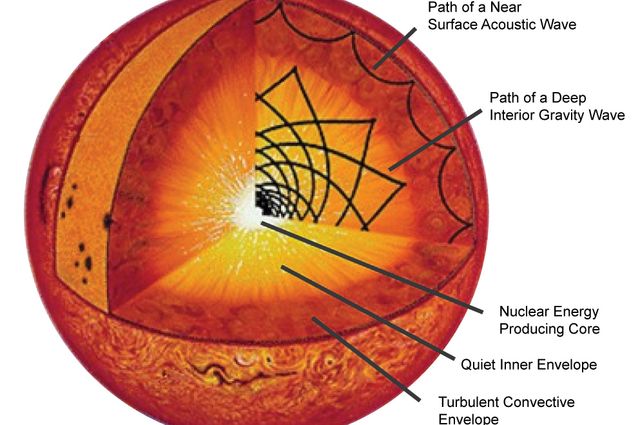 How do we know what’s going on inside the sun? Luckily, the sun is continuously ‘ringing’ like a bell, owing to its internal convective motions. Scientist able to study various forms of sound waves generated within the sun’s interior, to learn what’s there. Image via UCLA.

G-modes have been detected in other stars, and now thanks to SOHO we have finally found convincing proof of them in our own star. It is really special to see into the core of our own sun to get a first indirect measurement of its rotation speed. But, even though this decades-long search is over, a new window of solar physics now begins.

The researchers used 16 years of observations from an instrument called GOLF (Global Oscillations at Low Frequency) on the SoHO spacecraft. The method was developed by the researchers. SoHO – a joint project of ESA and NASA – was launched on December 2, 1995 to study the sun from its core to the outer corona and the solar wind; the spacecraft continues to operate.

Roger Ulrich is a UCLA professor emeritus of astronomy, who has studied the sun’s interior for more than 40 years and is a study co-author. He pointed out in a statement from UCLA that it’s likely the sun’s core rotation is:

… left over from the period when the sun formed, some 4.6 billion years ago. It’s a surprise, and exciting to think we might have uncovered a relic of what the sun was like when it first formed. 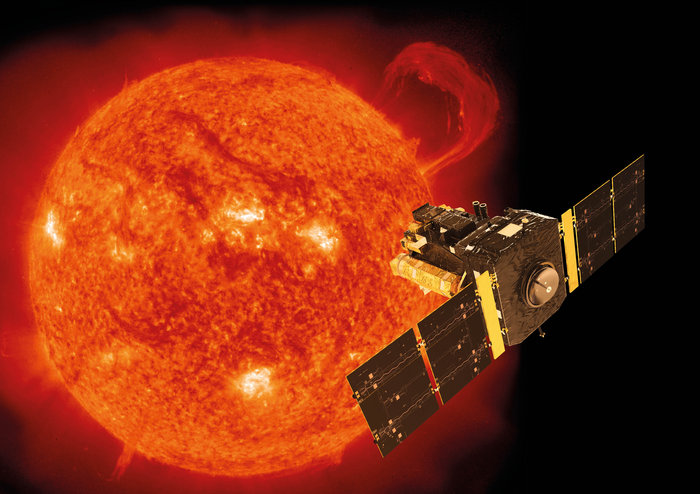 Bottom line: An international team of astronomers using data from SoHO has found that the sun’s core rotates or spins four times faster than its surface layers.

Via ESA and UCLA.