Hot, young, white dwarfs – the super-dense remains of sunlike stars – have atmospheres made essentially of pure hydrogen or pure helium. But these stars’ atmospheres are contaminated by other elements, too – for example, carbon, silicon and iron – known to astronomers as metals. A decades-old space mystery is how the metals came to be in white dwarf atmospheres. And now an international team of astronomers led by Professor Martin Barstow of the University of Leicester in the U.K. say they have solved the mystery. Their solution points to an ominous fate for planet Earth. Professor Barstow said in a press release:

The mystery of the composition of these stars is a problem we have been trying to solve for more than 20 years. It is exciting to realize that they are swallowing up the leftovers from planetary systems, perhaps like our own. 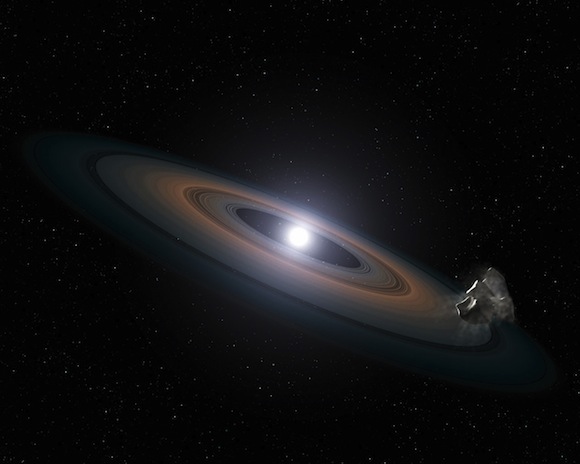 An earlier idea about this material was that it was “levitated” by the intense radiation from deeper layers in the star.

Now the researchers have discovered that many of the stars show signs of contamination by rocky material, the leftovers from a planetary system.

In the new study, researchers surveyed 89 white dwarfs, using the Far Ultraviolet Spectroscopic Explorer to obtain their spectra. In some of the stars, when certain elements are present in the atmosphere, the spectra reveal the chemical fingerprints of carbon, silicon, phosphorous and sulphur. Barstow said:

We found that in stars with polluted atmospheres the ratio of silicon to carbon matched that seen in rocky material, much higher than found in stars or interstellar gas.

The new work indicates that at around one-third of all hot white dwarfs are contaminated in this way, with the debris most likely in the form of rocky minor planet analogues. This implies that a similar proportion of stars like our sun, as well as stars that are a little more massive like Vega and Fomalhaut, build systems containing terrestrial planets.

This work is a form of celestial archaeology where we are studying the ruins of rocky planets and/or their building blocks, following the demise of the main star.

These scientists say that more detailed follow-up work will reveal much about the composition of rocky planets orbiting other stars. The study also points to the ultimate fate of the Earth billions of years from now – ending up as a contamination in the atmosphere of our sun, after it becomes a white dwarf. 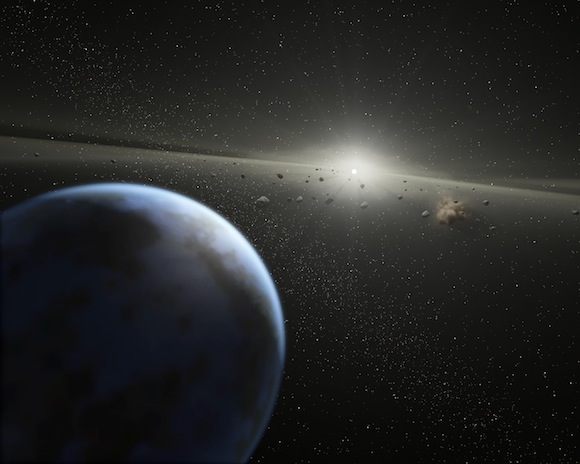 View full size. Artist’s impression of a massive asteroid belt in orbit around a star. The new work shows that similar rubble around many white dwarfs contaminates these stars with rocky material and water. Image via NASA-JPL / Caltech / T. Pyle.

Bottom line: A decades-old about how metals came to be in white dwarf atmospheres may be solved. Results of a new study suggest they are swallowing up the leftovers from planetary systems, much like that of our own Earth.

Royal Astronomical Society and Via University of Leicester