Saturn’s moon Titan – with its impenetrable methane atmosphere – is the only place in the solar system, other than Earth, with large bodies of liquid on its surface.

Saturn’s large moon Titan – with its impenetrable methane atmosphere – is the only place in the solar system, other than Earth, that has large bodies of liquid on its surface.

The Cassini spacecraft now orbiting Saturn found methane lakes on Titan in 2007. Titan is thought to have a “methane cycle” a distant cousin to Earth’s water cycle. Titan’s lakes had been thought to be located mainly around its poles, but in 2012, Cassini spied long-standing methane lakes, or puddles, in the “tropics” of Saturn’s moon Titan. One of the tropical lakes appears to be about half the size of Utah’s Great Salt Lake, with a depth of at least 3 feet (1 meter). 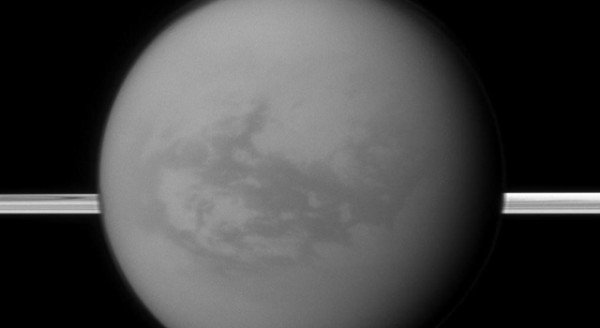 Saturn’s rings lie in the distance as the Cassini spacecraft looks toward Titan and its dark region called Shangri-La, east of the landing site of the Huygens Probe. Image Credit: NASA/JPL-Caltech/Space Science Institute

These results come from a new analysis of Cassini data and appeared in the journal Nature in June, 2012. These scientists also suggest a source for Titan’s methane lakes. Caitlin Griffith, the paper’s lead author and a Cassini team associate at the University of Arizona, Tucson, said:

A likely supplier is an underground aquifer. In essence, Titan may have oases.

Why were the lakes thought to congregate around the moon’s poles? Just as on Earth, sunlight striking Titan’s polar regions is weaker on average. Energy from the sun normally evaporates liquid methane on Titan’s surface, but since there’s generally less sunlight at the poles, it was thought to be easier for liquid methane at the poles to accumulate into lakes. Perhaps so. And thus liquid lakes around Titan’s tropics call for an explanation: a source by which the lakes can be replenished. Griffith said:

An aquifer could explain one of the puzzling questions about the existence of methane, which is continually depleted.

Bottom line: Scientists led by Caitlin Griffith at the University of Arizona, Tucson found tropical lakes of liquid methane on Saturn’s large moon Titan. The result is based on a new analysis of data from the Cassini spacecraft. Prior to this, Titan’s lakes were thought to be located mainly at its polar regions.

Read more about this story from NASA’s Jet Propulsion Laboratory