The supernova was as bright as 570 billion of our suns and some 20 times as luminous as the entire output of the 100 billion stars of our Milky Way galaxy. 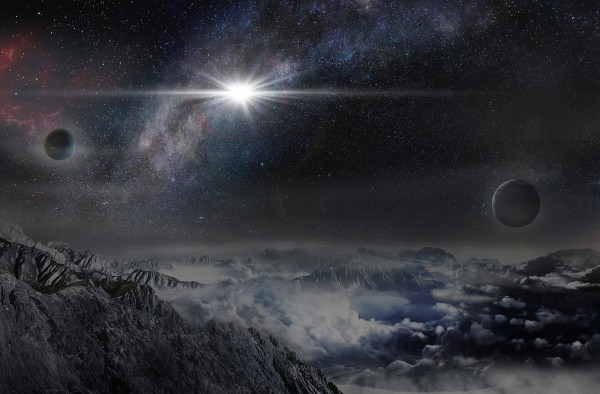 View larger. | Artist’s concept of the record-breaking, extremely powerful, superluminous supernova ASASSN-15lh as it would appear from an exoplanet located about 10,000 light years away. Image via Beijing Planetarium / Jin Ma.

Astronomers have witnessed a stunningly powerful cosmic explosion, a supernova that shatters the records of all previous supernovae. Described on January 14, 2016 in the journal Science, the event was:

– About 200 times more powerful than a typical supernova.

– More than twice as luminous as the previous record-holding supernova.

– Some 20 times as luminous as the entire output of the 100 billion stars of our Milky Way galaxy.

That’s a powerful supernova, yes? It has been labeled ASASSN-15lh. Telescopes at Cerro Tololo, Chile were the first on Earth to spot it in June, 2015, and afterwards many astronomers around the globe scrambled to turn their instruments on it. The lead author of the newly released study, astronomer Subo Dong at the Kavli Institute for Astronomy and Astrophysics at Peking University, said in a statement:

ASASSN-15lh is the most powerful supernova discovered in human history.

The explosion’s mechanism and power source remain shrouded in mystery because all known theories meet serious challenges in explaining the immense amount of energy ASASSN-15lh has radiated.

The statement from Kavli Institute for Astronomy and Astrophysics (KIAA) continued:

The record-breaking blast is thought to be an outstanding example of a ‘superluminous supernova,’ a recently discovered, supremely rare variety of explosion unleashed by certain stars when they die.

Scientists are frankly at a loss, though, regarding what sorts of stars and stellar scenarios might be responsible for these extreme supernovae.

The astronomers do say that, at around 3.8 billion light-years away, ASASSN-15lh is amongst the closest superluminous supernovae ever seen. They say its relative nearness might offer clues in unlocking the secrets of these powerful cosmic detonations.

Before and during supernova ASASSN-15lh. Images via The Dark Energy Survey, B. Shappee and the ASAS-SN team.

Astronomers around the world examined the bright, slowly fading afterglow of the supernova in the months following its discovery, and they gleaned a few basic clues about the origin of the event.

They say, for example, that ongoing observations have revealed that ASASSN-15lh bears certain features consistent with hydrogen-poor (Type I) superluminous supernovae, which are one of the two main types of these explosions.

ASASSN-15lh has also shown a rate of temperature decrease and radius expansion similar to some previously discovered Type I superluminous supernova.

In other ways, ASASSN-15lh stands apart. It’s not just brighter, but also hotter, than most Type I supernovae.

And astronomers have questions about the supernova’s home galaxy. Most Type I supernovae have been seen in small, dim galaxies, and astronomers had contemplated the idea that the smallness and dimness of a galaxy might somehow be connected this these sorts of events. But ASASSN-15lh’s galaxy appears bigger and brighter than our Milky Way. On the other hand, it’s also possible that ASASSN-15lh might not reside in the galaxy astronomers identify with it. It might reside instead in small, faint, as-yet-unseen galaxy.

To clear up where exactly ASASSN-15lh is located, as well as numerous other mysteries about this wonderful event, the research team has been granted time in the coming year on the Hubble Space Telescope.

With Hubble, Dong and colleagues say they’ll be able to obtain the most detailed views yet of the aftermath of the explosion of ASASSN-15lh. The Kavli Institute statement said:

Important insights into the true wellspring of its power should then come to light.

One hypothesis is that the event is somehow connected to highly magnetized, rapidly spinning neutron stars called magnetars, which are the leftover, hyper-compressed cores of massive, exploded stars.

Another idea is that ASASSN-15lh might have been triggered by the demise of an incredibly massive star, a more massive star than astronomers thought possible.

Bottom line: ASASSN-15lh is considered to be a superluminous supernova, first spotted in June, 2015.