Theoretical studies predict 100 million to 1 billion black holes in our Milky Way galaxy. So far, astronomers have found about 60. A serendipitous discovery could lead to finding more. 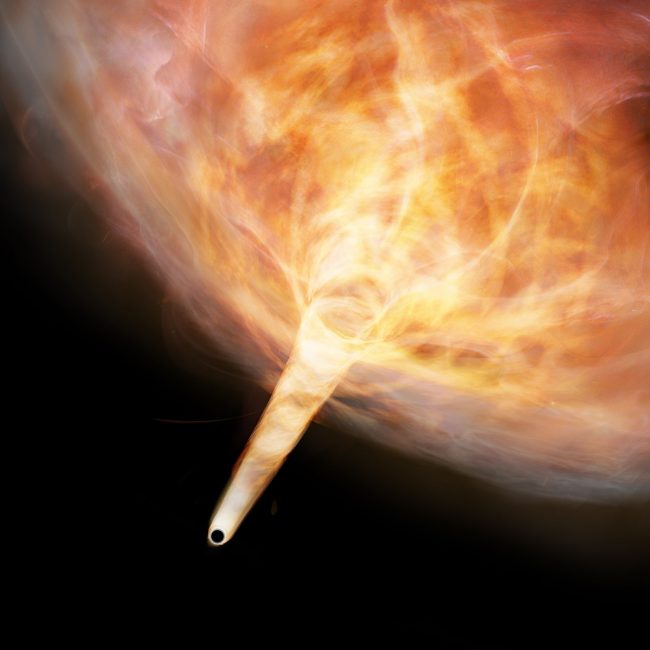 View larger. | Artist’s concept of a stray black hole storming through a dense, rapidly moving gas cloud known as the Bullet. The gas is dragged along by the strong gravity of the black hole to form a narrow gas stream. Image via NAOJ Nobeyama Radio Observatory/ Keio University.

Many of the black holes we hear about nowadays are supermassive, found at the centers of galaxies, with hundreds of thousands to billions of times the mass of our sun. But much smaller black holes are thought to wander the space of our Milky Way galaxy and other galaxies. Astronomical theory predicts 100 million to 1 billion black holes of these so-called stellar black holes in our Milky Way, with masses up to a few tens of times that of our sun. So far, astronomers have found about 60. On February 2, 2017, astronomers at the National Astronomical Observatory of Japan (NAOJ) announced their analysis of the gas motion of an extraordinarily fast-moving cosmic cloud – nicknamed the Bullet – lurking just outside a supernova remnant known as W44. In this region, a quiet, stellar black hole may be responsible for the Bullet’s fast motion. These astronomers say their analysis may serve as a prototype for discovering many more black holes in our Milky Way galaxy. According to these astronomers’ statement:

This result marks the beginning of the search for quiet black holes; millions of such objects are expected to be floating in the Milky Way although only dozens have been found to date.

These astronomers published their findings in January, 2017 in the peer-reviewed Astrophysical Journal Letters.

A black hole is a place in space where matter is squeezed into a tiny space, and where gravity pulls so hard that even light can’t escape. Black holes are black. No light comes from them. Up to now, most known stellar black holes are those with companion stars. The black hole pulls gas from the companion, which piles up around it and forms a disk. The disk heats up due to the enormous gravitational pull by the black hole and emits intense radiation.

On the other hand, if a black hole is floating alone in space – as many must be – its lack of light or any sort of emission would make it very, very hard to find. 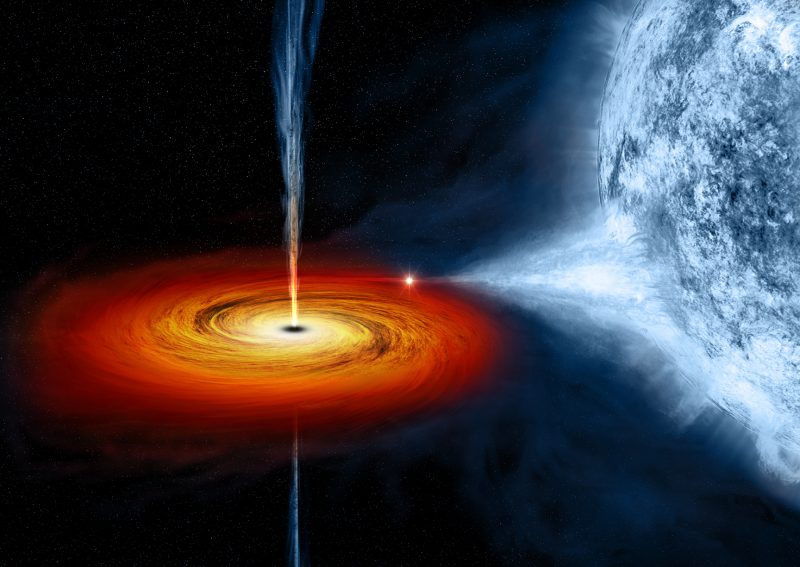 View larger. | Artist’s concept of Cygnus X-1, one of the first stellar black holes known. The black hole is on the left. It has a disk around it, made of material pulled from the companion star on the right, and it has a jet emanating from either pole. The disk and the jet are what astronomers observe. If a black hole lacks a companion star, it would be much, much harder to find. Image via NASA.

Graduate student Masaya Yamada and professor Tomoharu Oka, both of Keio University, led a research team that was surveying gas clouds around the supernova remnant W44, located 10,000 light-years away from us, when they noticed something unusual. Their statement explained:

During the survey, the team found a compact molecular cloud with enigmatic motion. This cloud, [nicknamed] the ‘Bullet,’ has a speed of more than 100 km/second [60 miles/second], which exceeds the speed of sound in interstellar space by more than two orders of magnitude. In addition, this cloud, with the size of two light-years, moves backward against the rotation of the Milky Way galaxy.

The energy of motion of the Bullet is many times larger than that injected by the original W44 supernova. The astronomers think this energy must come from a quiet, stray black hole, and they proposed two scenarios to explain the Bullet:

In both cases, a dark and compact gravity source, possibly a black hole, has an important role. One scenario is the ‘explosion model’ in which an expanding gas shell of the supernova remnant passes by a static black hole. The black hole pulls the gas very close to it, giving rise to an explosion, which accelerates the gas toward us after the gas shell has passed the black hole. In this case, the astronomers estimated that the mass of the black hole would 3.5 times the solar mass or larger.

The other scenario is the ‘irruption model’ in which a high speed black hole storms through a dense gas and the gas is dragged along by the strong gravity of the black hole to form a gas stream. In this case, researchers estimated the mass of the black hole would be 36 times the solar mass or larger. With the present dataset, it is difficult for the team to distinguish which scenario is more likely.

The team hopes to disentangle the two possible scenarios and find more solid evidence for a black hole in the Bullet with higher resolution observations using a radio interferometer, such as the Atacama Large Millimeter/submillimeter Array (ALMA) in Chile.

Bottom line: Japanese astronomers say they’ve found a new way of discovering stray black holes in our Milky Way galaxy. They believe they’ve found one such black hole in the area of the supernova remnant W44. In this case, the black hole may be responsible for the very fast motion of a gas cloud in this region, nicknamed the Bullet.