Astronomers used radio waves to study conditions in the vicinity of Proxima Centauri, the nearest star to our sun. The results suggest Proxima’s 2 known planets are likely bathed in intense radiation from this star, casting doubt on the planets’ potential for life. 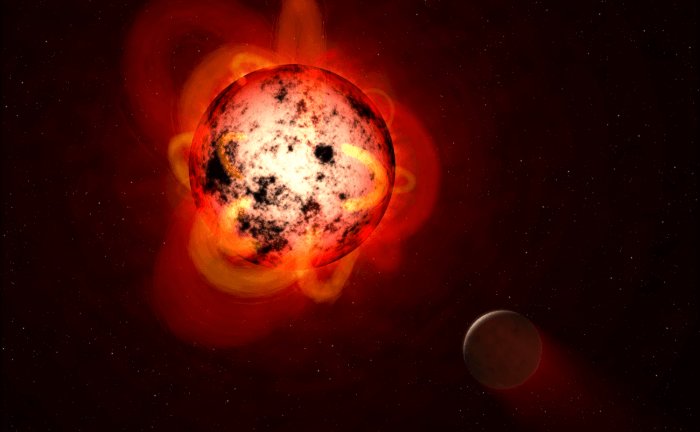 Artist’s concept of huge flares on Proxima Centauri, which unleash ionizing radiation. This radiation could be dangerous for any possible life on planets orbiting close to the star. Image via NASA/ ESA/ G. Bacon (STScI)/ Phys.org.

What is space weather?

When we hear about weather, we might think of Earth – sun, clouds, rain, wind and so on – or we might think about conditions on other planets or moons that have atmospheres. Space weather isn’t about that. It’s a sort of “weather” that originates in stars, including our own sun, and that permeates the space near a star. Space weather consists of ionizing radiation released during flares on the sun or other stars. The radiation can be deadly for any life forms that may exist on distant planets. That’s especially true, astronomers say, for red dwarf stars, which have more frequent flares than our sun. Red dwarf stars can be very volatile. Proxima Centauri is a red dwarf star.

Astronomers at the University of Sydney in Australia announced the new study on December 10, 2020. These researchers used radio waves to detect and probe the space weather in Proxima’s vicinity. Our sun’s nearest neighbor at only 4.2 light-years away, Proxima is known to have at least two planets orbiting it. One, Proxima Centauri b, is almost the same mass as Earth and the other, Proxima Centauri c, is about seven times more massive. Proxima Centauri b also orbits within its star’s habitable zone, where temperatures might allow liquid water to exist on planet’s surface. Sounds promising, right? But the new findings about flares on stars like Proxima suggest a grim prospect for life on the planets in this system.

The researchers published their peer-reviewed findings in The Astronomical Journal on December 9, 2020. 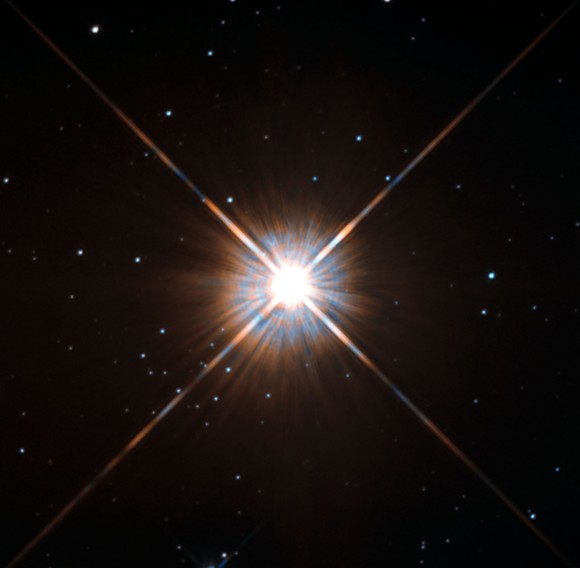 But given Proxima Centauri is a cool, small red-dwarf star, it means this habitable zone is very close to the star; much closer in than Mercury is to our sun. What our research shows is that this makes the planets very vulnerable to dangerous ionizing radiation that could effectively sterilize the planets.

Our sun also emits deadly radiation during its occasional coronal mass ejections. Luckily, Earth is relatively far from our star, in contrast to Proxima’s planets; this radiation doesn’t affect us as powerfully. Plus, Earth has an atmosphere and magnetic field that also help to protect us. Zic commented:

Our own sun regularly emits hot clouds of ionized particles during what we call ‘coronal mass ejections.’ But given the sun is much hotter than Proxima Centauri and other red-dwarf stars, our ‘habitable zone’ is far from the sun’s surface, meaning the Earth is a relatively long way from these events.

Further, the Earth has a very powerful planetary magnetic field that shields us from these intense blasts of solar plasma. 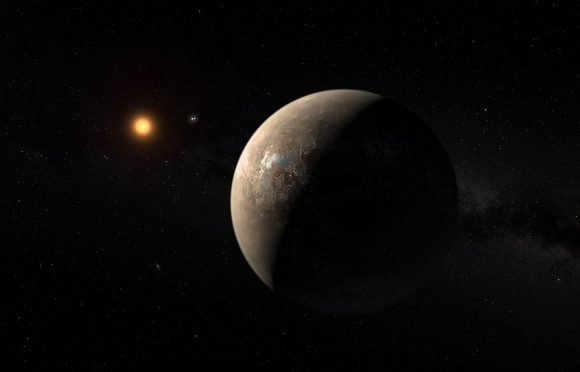 Artist’s concept of Proxima Centauri b, which is about 1.3 times the mass of Earth and orbits within the star’s habitable zone where liquid water could exist. The new data support previous studies, showing that the planet is subjected to intense radiation bursts from its star, putting its potential habitability in doubt. Image via ESO/ M. Kornmesser/ Phys.org.

The new study is the first that definitively links optical flares and radio bursts on a star other than the sun. This means that scientists can now use radio waves to study space weather around distant stars, which will provide important clues as to the potential habitability of any rocky planets orbiting them.

The success of these observations is exciting for astronomers. Tara Murphy at the University of Sydney reflected this in her comments:

This is an exciting result from ASKAP. The incredible data quality allowed us to view the stellar flare from Proxima Centauri over its full evolution in amazing detail.

Most importantly, we can see polarized light, which is a signature of these events. It’s a bit like looking at the star with sunglasses on. Once ASKAP is operating in full survey mode we should be able to observe many more events on nearby stars.

The ASKAP observations were also backed up by NASA’s Transiting Exoplanet Survey Satellite (TESS) and the Zadko Telescope.

Although there could be other explanations, the radio bursts from Proxima Centauri are thought to be connected to coronal mass ejections on the star, just like with our own sun. Zic said: 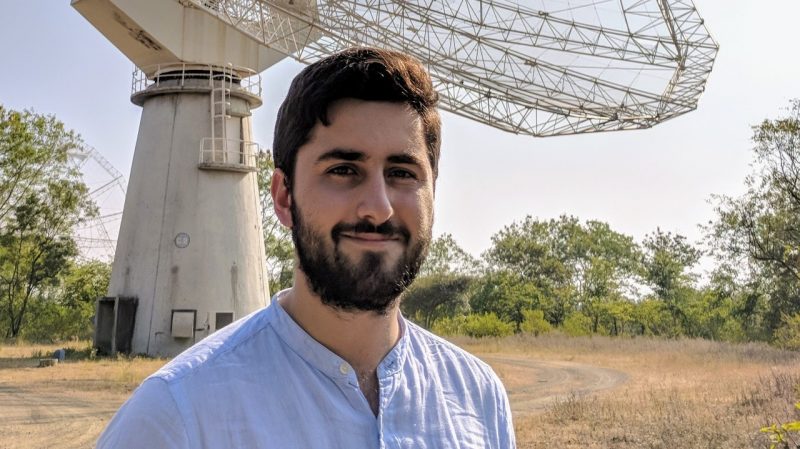 If Proxima Centauri is any indication, then red dwarf stars, by and large, are not the friendliest places for life. Of course, that also depends on other factors for any given planet, such as just how far it is from the star, how strong its magnetic field is if it has one, etc. Some red dwarfs are probably also more active than others, relatively speaking. As Zic commented:

This is probably bad news on the space weather front. It seems likely that the galaxy’s most common stars – red dwarfs – won’t be great places to find life as we know it.

The presence or lack of magnetic fields around the Proxima Centauri planets, or other red dwarf worlds, might be crucial to their habitability. We just don’t know yet how many of them do have such protective barriers against their stars’ radiation. According to Zac:

This remains an open question. How many exoplanets have magnetic fields like ours? But even if there were magnetic fields, given the stellar proximity of habitable zone planets around M-dwarf stars, this might not be enough to protect them.

On a more positive note, however, as Zic noted, red dwarfs are the most common stars, making up about 70% of the stars in our galaxy. That alone might suggest that at least some of their planets could still be habitable. 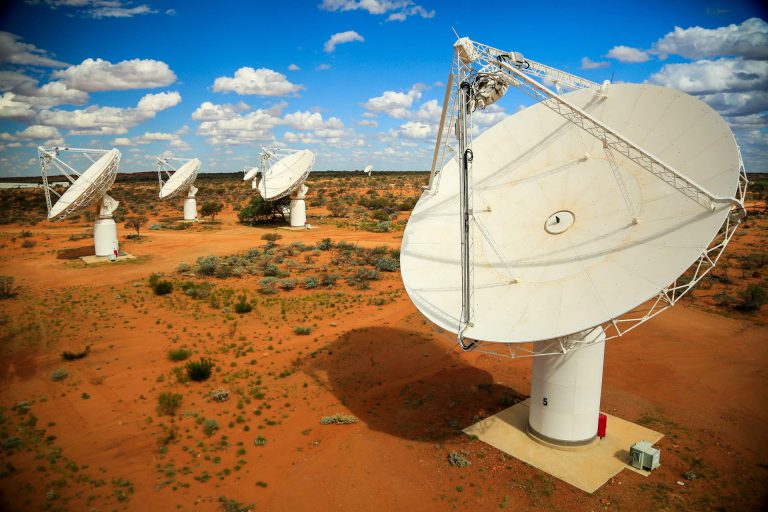 These new results can also be applied not only to the study of Earth’s own biosphere as it exists now and has evolved, but in the future as well. Bruce Gendre at the University of Western Australia noted:

Understanding space weather is critical for understanding how our own planet’s biosphere evolved, but also for what the future is.

Bottom line: Astronomers have used radio waves to study space weather around the nearest star to the sun, Proxima Centauri. The results show that the two known planets are probably subjected to intense radiation from their star, casting doubt on their potential habitability.

Via the University of Sydney