“These are four of the strangest moons in the solar system,” said New Horizons mission’s Mark Showalter. “We still don’t know what to make of it.”

The orbits of Pluto’s four smallest outer moons are even more chaotic than scientists had expected, according to results from the New Horizons mission, which made a close flyby of Pluto on July 14. Scientists discussed the findings yesterday (November 9, 2015) at the meeting of the Division for Planetary Sciences of the American Astronomical Society (AAS).

Hydra, Nix, Kerberos and Styx behave like “spinning tops” according to Mark Showalter, a co-investigator on the New Horizons mission. Showalter said:

These are four of the strangest moons in the solar system.

The way I would describe this system is not just chaos, but pandemonium. We honestly have not seen anything like this before, and we still don’t know what to make of it. 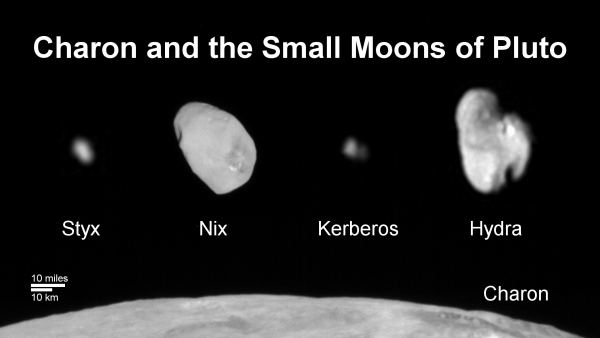 The new results show that as the four moons orbit Pluto and its largest moon, Charon, some of them are spinning incredibly fast, Nix is spinning backward against its orbit and some are tilted on their sides. This is in stark contrast to nearly every other moon in Earth’s solar system, most of which are locked into a more rigid and unmoving orbit around their parent bodies.

Pluto’s outermost moon, Hydra, is spinning like a top, rotating 89 times every time it circles the dwarf planet. Showalter said:

If Hydra were spinning much faster, material would fly off its surface due to the centrifugal force.

Scientists believe these spin rates may be variable because Pluto’s large moon Charon exerts a strong torque that prevents each small moon from settling down into synchronous rotation.

Bottom line: On November 9, 2015 at the meeting of the Division for Planetary Sciences of the American Astronomical Society (AAS) scientists announced that new findings from the New Horizons mission’s July 2015 close flyby of the Pluto system show that Pluto’s four smallest outer moons are even more chaotic than scientists had expected.