Alien megastructures – aka Dyson spheres – around a star 1,500 light-years away? Astronomers struggle to explain the most mysterious star in the universe. 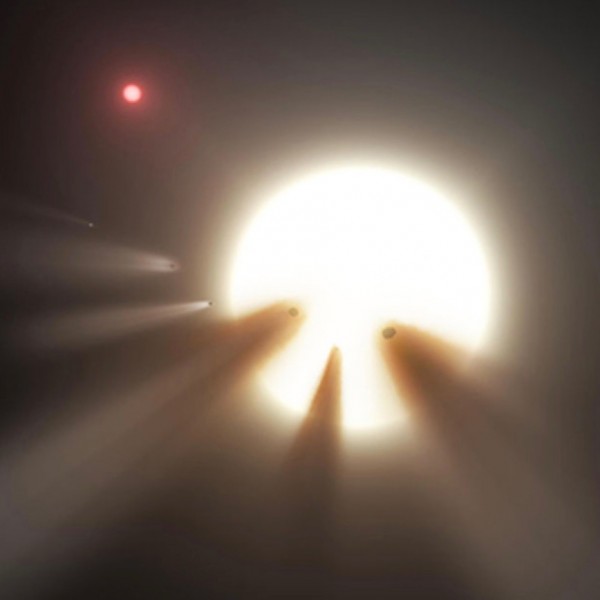 Artist’s concept of cascading comets around a distant star. This scenario is one of several possible explanations proposed for mystery star KIC 8462852. Image via NASA/JPL/Caltech/Vanderbilt University.

KIC 8462852 – aka Tabby’s star – hit the headlines in October, 2015. That’s when astronomers from Pennsylvania State University released a preprint suggesting that observations of the star’s weirdly fluctuating light were consistent with a swarm of alien-constructed megastructures. This week, astronomers at Vanderbilt University in Nashville, and elsewhere, announced their new study of this star, in which they duke it out with a Louisiana State University astronomer over an aspect of the star’s story. The new study supports natural causes, not alien activity, to explain the mystery star. It’s one more study in what’s sure to be many, many studies to come on KIC 8462852.

The strange fluctuations in this star’s light are what caused Yale astronomer Tabetha (Tabby) Boyajian, who first noticed the star and who described it in a TED talk in February, to call it:

… the most mysterious star in the universe.

The Vanderbilt astronomers and their colleagues weren’t addressing the part of the story related to the star’s strange light-curve observed by the Kepler planet-hunting spacecraft. Everyone agrees that KIC 8462852’s light can appear strongly and weirdly irregular, with anywhere from a fraction-of-a-percent to around 20 percent of the star’s light sometimes apparently blocked. That’s why astronomers began talking about alien megastructures, aka Dyson spheres, in the first place. These vast hypothetical structures are one explanation – the most glamorous of the possible explanations – for what might be periodically blocking the star’s light.

Instead, the astronomers at Vanderbilt and elsewhere were addressing a study released in January, 2016 by astronomer Bradley E. Schaefer at Louisiana State University.

Schaefer’s work had suggested a long-term dimming in Tabby’s star, a brightness decrease by 20 percent over the last century. That finding difficult to explain by natural means but consistent with the idea that aliens were gradually converting the material in the star’s planetary system into giant megastructures. Schaefer’s study has now been accepted for publication in the peer-reviewed Astrophysical Journal.

The more recent study – whose lead author is German amateur astronomer Michael Hippke – is also accepted for publication in the Astrophysical Journal. It takes issue with Schaefer’s study and concludes in a statement from Vanderbilt:

… there is no credible evidence that the brightness of the star been steadily changing over this [100-year] period.

Vanderbilt doctoral student Michael Lund was the astronomer who first noted that Schaefer’s study was based on data from a unique resource: Digital Access to a Sky Century@Harvard. DASCH consists of more than 500,000 photographic glass plates taken by Harvard astronomers between 1885 and 1993.

Lund wondered if the apparent 100-year dimming of Tabby’s star might not be real, but instead caused by the fact that many different telescopes and cameras were used during the past century to study it. Keivan Stassun, Lund’s advisor, explained:

Whenever you are doing archival research that combines information from a number of different sources, there are bound to be data precision limits that you must take into account. In this case, we looked at variations in the brightness of a number of comparable stars in the DASCH database and found that many of them experienced a similar drop in intensity in the 1960s.

Brad Schaefer, on the other hand, stands by his claim that the star has dimmed over the past 100 years, by more than the team at Vanderbilt can explain. In an email on May 10, 2016, he told EarthSky:

The long-term dimming is alive and well.

Schaefer said that independent measures by “the most expert people in the world” show that Tabby’s star has indeed faded, saying:

I have heard on good authority that another group has found Tabby’s star to be fading with other datasets … The problem with the Hippke paper is that they have included stars and measures that no experienced person would use.

So the debate about the bizarre light of KIC 8462852 continues. And even Michael Hippke admits:

The dips found by Kepler are real. Something seems to be transiting in front of this star, and we still have no idea what it is!

Hippke also mentioned that “thousands” of amateur astronomers around the world are now joining the pros in turning their thoughts and pointing their telescopes toward Tabby’s star:

… snapping images and sending them to the American Association of Variable Star Observers in hopes of detecting further dips that will shed new light on this celestial mystery. 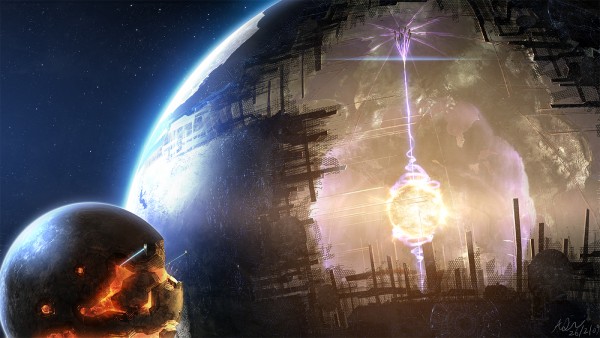 View larger. | Here is a completely fantastic artists’ concept of a Dyson sphere, via FantasyWallpapers.com

Bottom line: Astronomers are duking it out on the subject of whether mystery star KIC 8462852 – aka Tabby’s Star – has decreased in brightness by 20 percent over the past century.