Scientists use AI to find tiny craters on Mars

All these years, NASA scientists have laboriously sifted through spacecraft images to identify and classify markings on Mars. Now they’re using a new “classifier,” powered by artificial intelligence. What takes a human 40 minutes takes the AI tool an average of just 5 seconds. 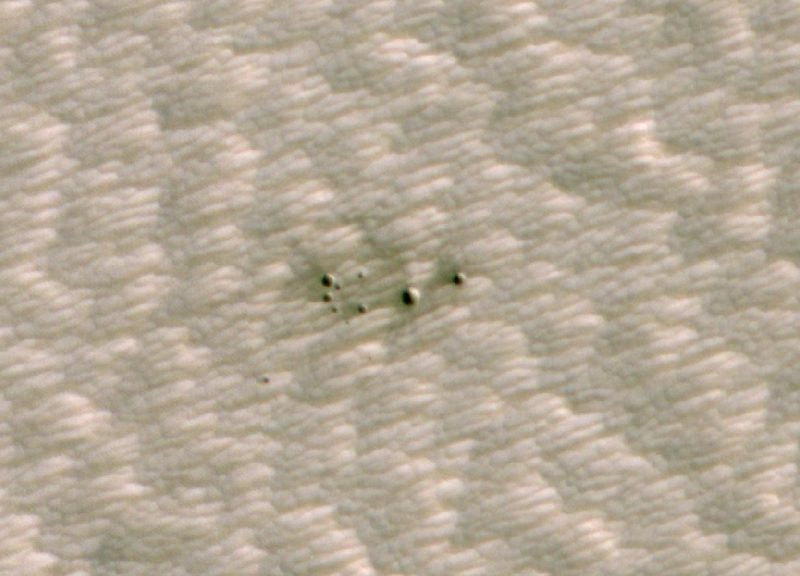 The High-Resolution Imaging Science Experiment (HiRISE) camera aboard NASA’s Mars Reconnaissance Orbiter took this image of a crater cluster on Mars, the first ever to be discovered by artificial intelligence (AI). NASA said, “These craters were created by several pieces of a single meteor. The largest of the craters is about 13 feet (4 meters) wide. In total, the craters span about 100 feet (30 meters) of the red planet’s surface. The craters were found in a region called Noctis Fossae, located at latitude -3.213, longitude 259.415.” Image via NASA/ JPL-Caltech/ University of Arizona.

On October 1, 2020, scientists at NASA’s Jet Propulsion Laboratory in Pasadena, California, announced they’ve been using a new artificially intelligent (AI) “classifier.” It’s a tool used to identify, or classify, geologic features and markings on the surface of another planet, in this case the planet Mars. They said they’ve taught their new tool to recognize and mark potential craters on Mars, so that scientists on Earth and spacecraft in Mars orbit can then follow up, confirming the new find. And they said the new AI tool had successfully identified a previously undiscovered cluster of small craters on Mars’ surface, proving that artificial intelligence can be used to help track changing landscapes on worlds beyond Earth.

Until the introduction of the new computer classifier, planetary scientists had to make these initial identifications of meteor craters on Mars themselves, by laboriously sifting through images from the Context Camera aboard the Mars Reconnaissance Orbiter one at a time. All that changed when the young AI saw a small, irregular black dot in the lower left corner of an image of the Noctis Fossae region. See the discovery image below.

On August 26, 2020, the HiRISE camera aboard the Mars Reconnaissance Orbiter did confirm con that the dark dot was, in fact, a cluster of small craters. The craters are now believed to have been created on Mars when a meteor crashed into the planet sometime between March 2010 and May 2012. 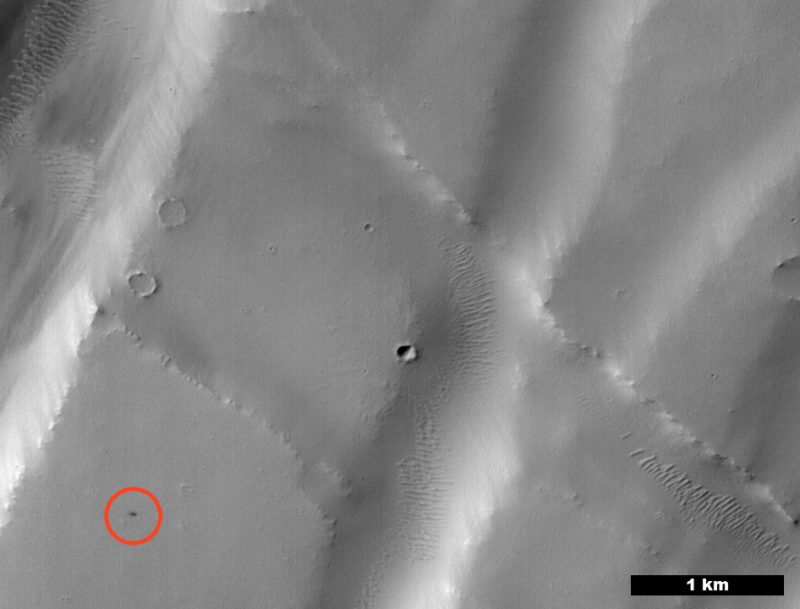 Here’s the original image in which NASA’s new AI “classifier” made its first discovery of tiny craters on Mars. The tiny black speck in the lower left corner of this image – inside the red circle – is the crater cluster, discovered in the Noctis Fossae region on Mars. Once the AI had been used to note this tiny speck, the HiRISE camera aboard NASA’s Mars Reconnaissance Orbiter was able to confirm it. See the confirmation image at the top of this post. Image via NASA/ JPL-Caltech/ MSSS.

According to the NASA statement, scientists spend up to 40 minutes analyzing each individual image captured by the Mars Reconnaissance Orbiter’s Context Camera. They have to search through thousands of images, many or most of which may not yield new discoveries or interesting scientific results. The new AI assistant – which scientists refer to as an automated fresh-impact crater classifier – can analyze an image in about five seconds.

Does this mean planetary scientists searching for interesting things on other worlds are about to be replaced by artificial intelligence? No, according to Ingrid Daubar, a scientist at both JPL and Brown University who was involved in the work. She said that AI still doesn’t have all of the critical skills or refined capability of a human scientist. So the work of a computer classifier still has to be checked. She said: 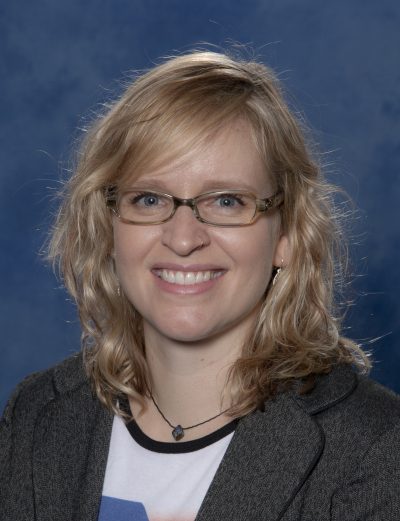 Ingrid Daubar of NASA’s Jet Propulsion Laboratory and Brown University is one of the scientists working with the new “classifier,” an artificially intelligent tool for finding new and interesting geologic features on other planets. Image via Brown University.

Gary Doran is a computer scientist at JPL who has also worked on the classifier. He said that AI isn’t yet “well trained enough” to understand the nuances between features that might appear similar on low-resolution images – that is, images that might appear somewhat blurry or pixelated – but are in fact, very different. He said:

One other thing we check for is a ‘before’ image of the site so that we can bound the date of formation. Some craters look fresh, and might have formed in the past 100 years, say, but the scientists are most interested in those for which we can give a constrained date range for their formation. 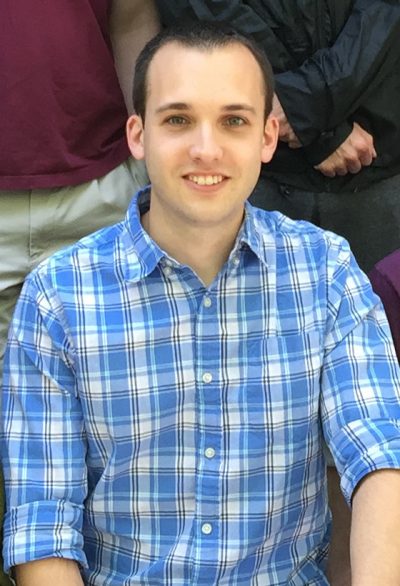 Gary Doran is a member of the Machine Learning and Instrument Autonomy Group at NASA’s Jet Propulsion Laboratory. He also works with the new classifier. Image via JPL.

This isn’t, of course, the first time scientists have successfully employed artificial intelligence in their studies of the universe. In 2018, researchers from the University of Toronto at Scarborough deployed the same machine learning algorithm used for self-driving cars to identify, count and calculate the size of 6,000 previously undiscovered lunar craters. The project proved that neural-network-based AI can be trusted to engage in some of the most laborious and time-consuming tasks associated with scientific research.

For the new NASA classifier, the task seemed simple: identify potential craters. However, while craters remain untouched by time and erosion on our dry and airless moon, the ever-changing landscape of Mars presents a different challenge.

To combat the challenges of Mars – where dust storms sometimes blanket the globe, and where ice comes and goes at the surface – the team of JPL researchers spent many hours developing the classifier and training it on what to look for … and what not to look for. They did this by feeding the AI some 6,830 previously analyzed images, to verify whether it could find impacts that have already been confirmed by the HiRISE camera, along with images showing no impacts.

Doran, who worked very closely with the AI classifier, and trained it to “think” about the images it was looking at, said that the training all started with a set of labels:

We programmed or ‘trained’ the classifier to detect fresh impacts by giving it a set of labeled examples that had already been identified by scientists as impact craters. We also provided a set of background images that are not impacts so that the classifier could learn to distinguish these craters from other features on the surface. The work the classifier does is to find other examples within the large dataset of all [observations made with the Mars Reconnaissance Orbiter’s Context Camera] that are similar to the examples that were provided during training.

Space scientists launched the Mars Reconnaissance Orbiter in 2005 with a primary mission to search for evidence of water on Mars’ surface, and to determine whether life ever existed there. Among its other goals are characterization of the red planet’s climate and geology.

Over the past 14 years, the mission’s Context Camera has collected a repository of roughly 120,000 low-resolution images that scientists have used to identify over 1,000 new craters on the surface of the red planet, along with other changes to the planetary landscape: for example, shifting dunes, avalanches, and dust devils. Once identified in images, scientists follow up with the HiRISE camera, an instrument so powerful that it clearly imaged the Curiosity rover’s tracks across Mars’ Mount Sharp in May and July 2019.

Thanks to the handiwork of NASA’s computer scientists and their new AI classification assistant, small clusters of craters on Mars’ surface can be found faster, but Daubar acknowledged there is still work to be done:

There are likely many more impacts that we haven’t found yet. This shows you just how much you can do with veteran missions like Mars Reconnaissance Orbiter using modern analysis techniques.

Success with AI on the Mars Reconnaissance Orbiter will also likely have an impact on other Mars missions, as well as research occurring elsewhere in space, and even on Earth.

Doran explained that the implications of successful AI deployments like this one may be far-reaching:

Increasing the speed at which we can search for features like fresh impacts means we can perform similar searches for larger datasets and from other domains. Particularly in the fields of Earth science and astronomy, these data sets are much larger than the datasets from Mars and other planets because we only have limited bandwidth to send back data from interplanetary missions.

Despite both the possibilities and the constraints, the team isn’t waiting around for what comes next. They’ve already submitted more than 20 additional images from their new classification assistant to be verified by HiRISE.

Like many NASA missions, the public can participate in the HiRISE mission through the HiWish public project by submitting targets for consideration.

Bottom line: A new artificial intelligence “classifier” – a tool for finding and classifying geologic features on Mars – has successfully found new craters on Mars’ surface, proving that AI can contribute to scientific research on the changing landscapes of the red planet, at a speed unmatched by human scientists.