Microbes on or within Saturn’s moon Enceladus?

“It sounds crazy but it could be snowing microbes on the surface of this little world,” a space scientist said of Saturn’s moon Enceladus.

Microbes on Enceladus? There’s a chance that Saturn’s sixth-largest moon, Enceladus, might harbor microbial life according to scientists studying information obtained by NASA’s Cassini spacecraft. The spacecraft is now making a series of tantalizingly close flybys to the moon, scientists said on March 27, 2012. They said watery jets erupting from Enceladus might be coming from a vast underground sea. These jets, which spew through cracks in the moon’s icy shell, could lead back to a habitable zone, according to these scientists.

Saturn closest, brightest, opposite the sun on April 15, 2012 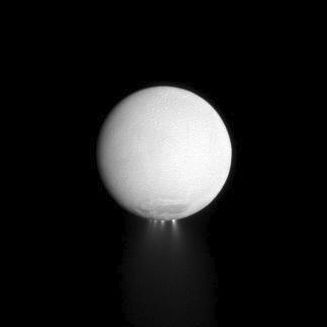 Saturn’s moon Enceladus has active jets or geysers on its surface that are spewing water into space. Image credit: NASA/JPL/Space Science Institute 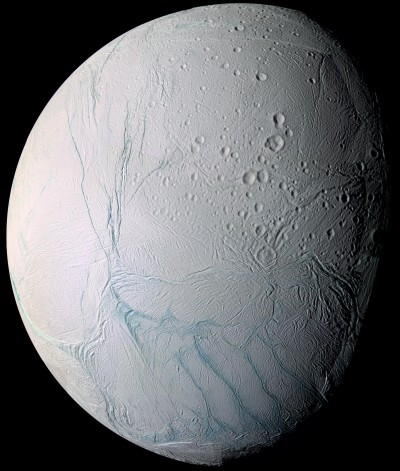 The so-called tiger stripes on Saturn’s moon Enceladus can be seen in this image, on the lower part of the moon. Credit: Cassini Imaging Team, SSI, JPL, ESA, NASA (APOD 6/28/09)

On March 27, Cassini flew 74 kilometers (46 miles) above Enceladus’s south pole and through one of the icy plumes known to be emanating from this moon. The next flyby will be April 14, 2012.

Carolyn Porco, an award-winning planetary scientist and leader of the Imaging Science team for NASA’s Cassini spacecraft, said in a press release:

More than 90 jets of all sizes near Enceladus’s south pole are spraying water vapor, icy particles, and organic [compounds] all over the place. Cassini has flown several times now through this spray and has tasted it. And we have found that aside from water and organic material, there is salt in the icy particles. The salinity is the same as that of Earth’s oceans.

Since 2004, the Cassini spacecraft has been investigating Saturn, its rings and its 53 named moons (plus nine moons not yet named). Enceladus is tiny — only 500 kilometers (310 miles) in diameter, about as wide as the state of Arizona. That’s in contrast to about 2,000 miles for the diameter of Earth’s moon.

In 2005, Cassini captured images of icy plumes jetting hundreds of kilometers above cracks on Enceladus’s south pole (top image, at right). The cracks themselves have been nicknamed “tiger stripes” because of their dark appearance (bottom image, at right). These are volcanoes of sorts of Enceladus, called cryovolcanos by scientists – ice volcanos to you and me. The jets on Enceladus are also sometimes referred to as geysers. Researchers theorize that an underground sea lies under the surface of the frozen moon Enceladus.

Enceladus is frozen because it’s in the outer solar system, but it’s relatively warm for a Saturnian moon at -120 degrees Fahrenheit. Researchers theorize that the source of heat is a combination of stored heat in the interior waters and newly generated heat from the gravitational push and pull of Saturn (“tidal forces”) on the tiny moon. 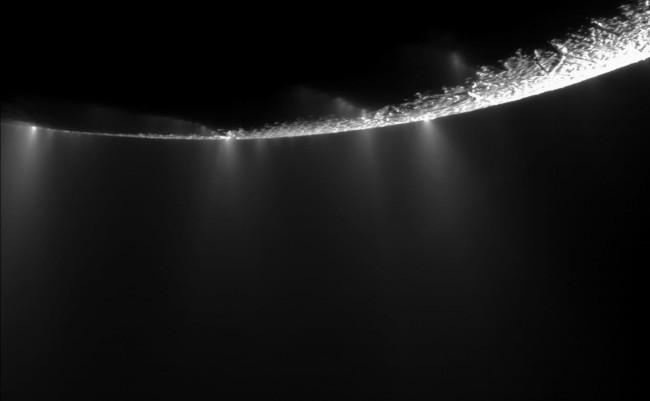 Water plus carbon compounds plus heat equals the possibility of life on another world within our own solar system. As Porco said, the conditions on Enceladus would be similar to conditions found deep within Earth where life has been found around volcanic rocks without the benefit of sunlight.

The bonus for scientists studying Enceladus is that they know just where to look for life. And this habitable zone is, relatively speaking, easily accessible.

It’s erupting out into space where we can sample it. It sounds crazy but it could be snowing microbes on the surface of this little world. In the end, it’s is the most promising place I know of for an astrobiology search. We don’t even need to go scratching around on the surface. We can fly through the plume and sample it. Or we can land on the surface, look up and stick our tongues out. And voilà…we have what we came for.

Bottom line: Scientists are using the Cassini spacecraft to study the composition of icy plumes on the south pole on Saturn’s moon Enceladus. They have found water, salt and carbon compounds, said space scientist Carolyn Porco in an announcement made March 27, 2012. The presence of heat in the tiny moon gives strength to the possibility that microbial life could exist on this tiny world. Scientists are eager for further explorations.