Analysis of data from the MESSENGER spacecraft reveals that, along with the sun, distant Jupiter may be influencing Mercury’s orbit and spin. 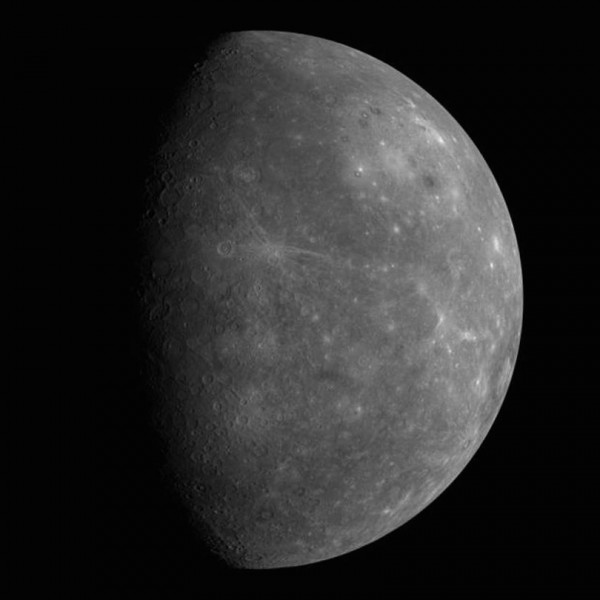 Hundreds of images from the MESSENGER spacecraft went into creating this mosaic of Mercury. Image via German Aerospace.

It’s long been known that Mercury spins three times on its axis for every two revolutions around the sun. It was natural to assume the sun was influencing Mercury’s spin. Now scientists have learned that distant Jupiter – largest planet and second-largest body in our solar system – also may also be influencing Mercury’s orbit and spin, which is more complex than scientists realized. Among other new insights, scientists have learned that Mercury is spinning on its axis about 9 seconds faster than scientists had previously calculated. Jean-Luc Margot, a planetary scientist with the University of California, Los Angeles, and a co-author of the new study, said in a September 9, 2015 statement from the American Geophysical Union (AGU):

It is not a huge difference, parts per million, but it is unexpected.

The new insights have come from the MESSENGER spacecraft, which reached Mercury in 2011, designed for a one-year mission. The spacecraft lasted four years and performed 3,308 orbits around the planet – gathering unprecedented data on Mercury from lower altitudes than any mission before – before crashing into Mercury’s surface in April, 2015.

Scientists who have been analyzing data from MESSENGER have now learned about its spin and possible interactions with other worlds in our solar system, and they’ve also gained new insights on the internal structure of this sun-seared planet (see below). Regarding Mercury’s spin, the AGU statement explained:

Mercury does not rotate on its axis smoothly, like a record, but experiences regular fluctuations in speed over an 88-day cycle – a year on the closest planet to the sun.

These oscillations, or librations, are caused by the planet’s interactions with the sun as it moves around the star. The sun’s gravitational pull speeds up or slows down Mercury’s rotation depending on where the oblong-shaped planet is on its elliptical orbit.

That much was already known, but the 9-second speed increase still needed to be explained. One explanation could stem from from the far-reaching pull of Jupiter, largest planet in our solar system. Jupiter’s gravity tugs on Mercury’s orbit, and changes the innermost planet’s distance to the sun and the way that our sun influences on Mercury’s spin.

The authors of the new study propose that Jupiter, which travels around the sun roughly once every 12 years, has superimposed a 12-year, long-term libration – a perceived oscillating motion of Mercury – on top of Mercury’s known 88-day libration. This long-term libration could be causing the slight increase in speed observed during the time period of the new study and also cause a slow-down in Mercury’s spin at other times, according to the study’s authors.

Margot said the influence of Jupiter on Mercury is only one possible explanation for the new observations and additional measurements could unveil additional influences on the planet. Margot said:

It’s still a bit of a puzzle. 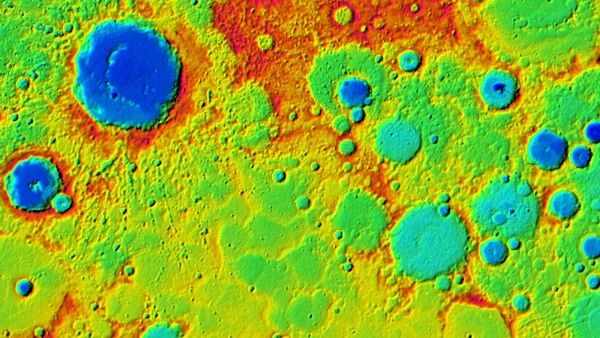 New insights into Mercury’s internal structure. Scientists have also used measurements of Mercury’s rotation and its librations to infer information about the interior of the planet. This study was led by Alexander Stark, a planetary scientist with the German Aerospace Center at the Institute of Planetary Research in Berlin.

This new study is also based on data from MESSENGER. It suggests that – when Mercury starts to revolve farther from the sun and the sun starts to slow Mercury’s rotation – the planet rotates 460 meters (1,500 feet) short of its full rotation. That’s a distance equivalent to the height of the Empire State Building. As it circles closer to the sun, the planet speeds up and makes up the lost distance, these scientists say.

If a planet has a molten outer core, the planet’s outer and inner layers are not locked together. The outer layers – the crust and the mantle – can experience large librations in response to the gravitational pull from the sun.

Bottom line: The MESSENGER spacecraft spent four years orbiting Mercury before crashing into Mercury’s surface in April, 2015. Analysis of MESSENGER’s data has now revealed that the planet spins about 9 seconds faster than scientists had calculated. That, in turn, has let scientists suggest that Jupiter – though far from Mercury’s orbit near the sun – may be exerting a gravitational effect on Mercury. Analysis of MESSENGER data has also revealed details of the planet’s rotation, which have let scientists confirm a model of Mercury’s interior in which the planet has a molten outer core.