Researchers have been busily building a prototype of a 33-pound (15 kg) lunar mini-robot, set to be the key instrument in a future mission aimed at capturing high-definition images of moon pits. 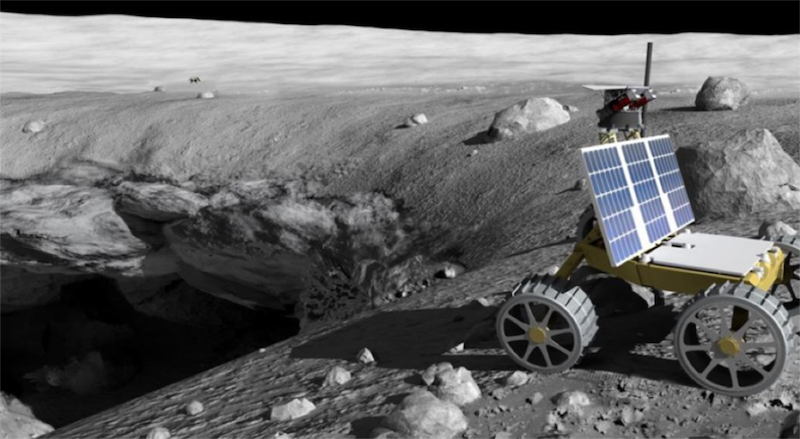 Curious about the pristine and peculiar science environments that might lie below the surface of the moon? Meet PitRanger, a tiny rover currently being designed to explore deep pits below the moon’s surface.

PitRanger is currently on track to become the key instrument in a short-term moon mission aimed at capturing high-definition 3D images of lunar pits. These deep, steep-walled holes are thought to have been shaped billions of years ago by a once-geologically-active moon. Funded by the NASA Innovative Advanced Concepts Program (NIAC), the mini-robot will weigh 33 pounds (15 kg) and be solar-powered. The decision to use solar power, in particular, poses challenges, alongside advantages, on a world whose day and night last about two earthly weeks.

Interested in the moon? EarthSky’s lunar calendar shows the moon phase for every day in 2021. Order yours before they’re gone!

Although no launch dates have been proposed yet, the mission is envisioned for launch in either 2021 or 2022. The prototype is being built by robotics research scientist William Whittaker and his team at Carnegie Mellon University. The prototype has already undergone and passed testing by performing at a sinkhole here on Earth.

Whittaker provided an update on his work during a virtual NIAC meeting held in September 2020, noting that significant progress has been made in PitRanger’s development.

Whenever it’s launched, PitRanger will be a brief mission in contrast to previous moon rover missions, because of the length of lunar day and night. A lunar day lasts about 14 Earth days, and because solar-powered PitRanger depends on the sun for energy, the equally long lunar night becomes an opportunity for impending robot death. Whittaker emphasized this by saying:

PitRanger is also different from previous moon exploration missions because of its autonomy. The PitRanger robot rover is designed with the strategic decision-making and imaging capabilities required to navigate risky ledges around a pit. Autonomy for quick missions like this one is becoming a necessary technology, these scientists say, since supervision and guidance from controllers on the ground won’t be available to small, solar-powered rovers like PitRanger.

The small lunar rover will roll at a top speed of 1 inch (2.5 cm) per second, and will be outfitted with a telephoto lens and panoramic unit in conjunction with a single solar panel. These features will work together using a panel-tilt mechanism to aim the camera at the pit, taking images at various angles that reach the pit’s far wall and floor. PitRanger will be accompanied by a lander. The rover will be programmed with the software smarts to prune and process images that’ll later be transferred to the lander for modeling. The little robot will do this repeatedly, wheeling back to the pit multiple times to acquire thousands of images and measurements. Once that work is done, the end result will be a photogrammetric model of the captured pit, providing an up-close and detailed look at what’s inside, as well as hard numbers on the pit’s shape, size, and other relevant features. These measurements should provide insights into how geologic forces play out on a world like the moon where, for example, the pull of gravity is only 1/6 as strong as here on Earth. Spacecraft cameras in lunar orbit are unable to make these sorts of measurements, or match this level of detail. Whittaker said:

The scenario is to rove to a pit with a micro-rover, peer into the pit, acquire images of walls, floors, caverns, and then generate pit models … Pit walls offer the only observable pristine geology on the moon. They are unique opportunities to observe volcanology, morphology and much more. 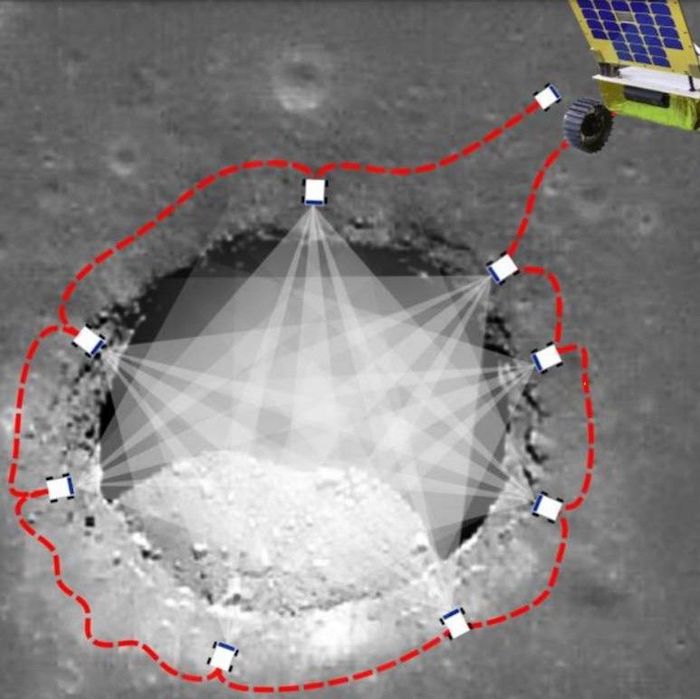 PitRanger may need to make multiple maneuvers to profile a lunar pit, as this illustration depicts. Image via USRA/ Carnegie Mellon.

It’s still unclear whether PitRanger will visit a single moon pit or if there will be multiple pits on its agenda. More likely it will visit more than one. There is also no discussion circulating on which pits are currently being targeted. The moon’s surface is battered by these holes, with more than 200 documented by NASA’s Lunar Reconnaissance Orbiter spacecraft. Pits range in size from roughly 15 feet (5 m) across to more than half a mile (1 km) in diameter. NASA says that most pits were found either in large craters with impact melt ponds – areas of lava that formed from the heat of the impact and later solidified – or in the lunar maria – dark areas on the moon that are extensive solidified lava flows hundreds of miles across. Exploring these pits would reveal valuable details about the voids in which they formed.

Moon pits, caves, and lava tubes – formed by flowing magma and covered in tiny crystals – are like windows to the moon’s history both within and below its surface. New technology intended for subsurface lunar exploration has been imagined by engineers in recent years, especially since NASA’s plans to return humans to the moon are just over the horizon. Whittaker said that if accessible, these geologic features could be havens from radiation, extreme temperatures, dust storms, and micrometeorite hazards of the moon’s surface. With this considered, peering into moon pits may not only prove monumental in understanding our natural satellite’s history, but also in creating a safe habitat on the lunar surface, which could be a jumping-off point for human missions to Mars.

Bottom line: Researchers are building a prototype of a 33-pound (15 kg) lunar mini-robot – called PitRanger – set to be the key instrument in a future mission aimed at capturing high-definition images of moon pits.