Posted by Deborah Byrd and Eleanor Imster in Space | October 24, 2016

Scientists used earthly telescopes to track hot spots on Io over a period of years and saw that it remains the most volcanically active world in our solar system.

UC Berkeley astronomers have used powerful ground-based telescopes to obtain the longest series yet of frequent, high-resolution observations of thermal emission from Jupiter’s moon Io. The observations show that Io continues to be the most volcanically active world in our solar system. In the video above, you can see hot spots detected on Io from August 2013 through December 2015. The size and duration of the spots indicates approximately how intense these hotspots were, and how long they were visible. Katherine de Kleer, the UC Berkeley graduate student who led the observations, and professor Imke de Pater also of UC Berkeley, presented their results on October 20, 2016 during last week’s joint meeting of the Division for Planetary Sciences and the European Planetary Science Congress in Pasadena, California.

On a given night, we may see half a dozen or more different hot spots. Of Io’s hundreds of active volcanos, we have been able to track the 50 that were the most powerful over the past few years.

See a complete list of volcanic features on Io here.

Before the Voyager 1 encounter with Io on March 5, 1979, Io was thought to be a dead world much like Earth’s moon. Voyager 1 was the first earthly spacecraft to see Io closeup. Its early images revealed few impact craters, suggesting a young surface. Voyager 1 also saw Io’s surface as multicolored and pockmarked with irregularly shaped depressions, which lacked the raised rims you see on most impact craters. This surface suggested that Io had been heavily modified by volcanism, at some point in the relatively recent past.

Scientists realized that this feature was a plume from an active volcano on Io. It was the first discovery of active volcanism anywhere in the solar system, beyond Earth.

And later still scientists realized that Io’s intense volcanic activity is powered by the giant planet Jupiter, which Io orbits closely. Jupiter’s intense gravitational pull squeezes Io just as you might squeeze a rubber ball in your hand. This continuous squeezing by Jupiter creates what’s called tidal heating or tidal flexing, basically heat from friction in Io’s interior, as this little world moves in orbit around Jupiter.

Since then, the handful of earthly spacecraft aimed toward the outer solar system have peered toward Io, too, trying to glimpse its active volcanos and learn this world’s secrets.

Observing from Earth is more difficult, but technological advances in past decades have made it possible. 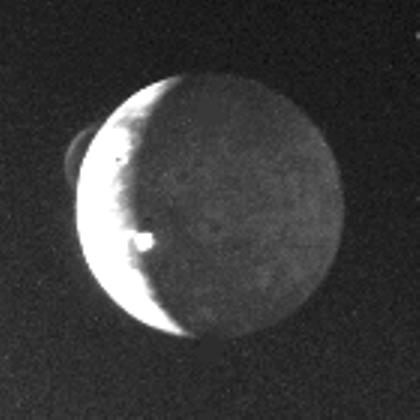 Discovery image of active volcanism on Io. The plume from Pele can be seen above Io’s limb, or edge. A second active volcano, Loki, is also visible along the terminator, or line between light and dark on Io. Image via Voyager 1 spacecraft/ NASA PhotoJournal.

The recent observations by Katherine de Kleer and her group used near-infrared adaptive optics – a technique for improving the ability of telescope’s to see clearly beyond Earth’s atmosphere – on two of the world’s largest telescopes, the 10-meter Keck II and the 8-meter Gemini North, both located near the summit of the dormant volcano Maunakea in Hawaii.

With these telescopes, the UC Berkeley astronomers tracked 48 volcanic hot spots on the surface over a period of 29 months from August 2013 through the end of 2015.

Without adaptive optics — a technique that removes the atmospheric blur to sharpen the image — Io is merely a fuzzy ball. Adaptive optics can separate features just a few hundred kilometers apart on Io’s surface – a span of about 2,200 miles (3,600 km) – these scientists said.

Katherine de Kleer and her team observed the heat coming off of active eruptions as well as cooling lava flows and were able to determine the temperature and total power output of individual volcanic eruptions.They tracked their evolution over days, weeks and sometimes even years.

One interesting result as that some of the eruptions appeared to progress across the surface over time, as if one eruption triggered another 300 miles (500 km) away. De Kleer said:

While it stretches the imagination to devise a mechanism that could operate over distances of 500 kilometers, Io’s volcanism is far more extreme than anything we have on Earth and continues to amaze and baffle us.

Papers describing the observations have been accepted for future publication by the peer-reviewed journal Icarus. 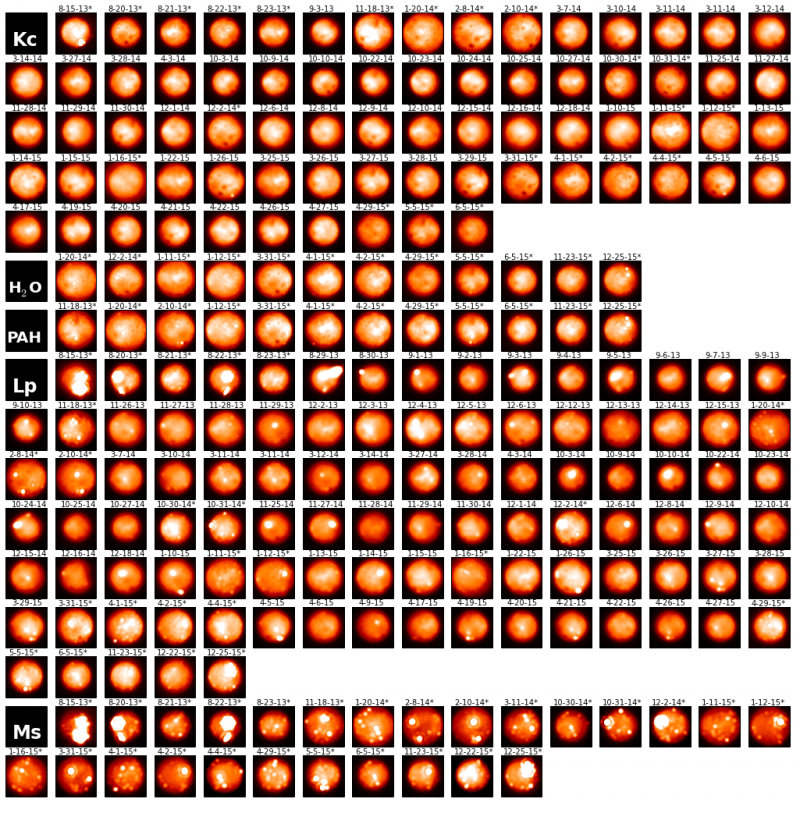 Images of Io at different near-infrared wavelengths show bright spots that are thermal emissions from the moon’s myriad volcanos. Note the increasing number of hot spots detected at longer wavelengths, i.e. towards the bottom of the figure. Image via Katherine de Kleer and Imke de Pater/ Gemini Observatory/AURA & Keck Observatory.

Bottom line: UC Berkeley scientists used near-infrared adaptive optics on two of the world’s largest telescopes, on Maunakea in Hawaii, to track hot spots on Jupiter’s moon Io over a period of years. This comprehensive tracking of Io confirms that it is still the most volcanically active world in our solar system.