Don’t miss these cyclones on Jupiter, and more

The Juno spacecraft’s last perijove – or closest point to Jupiter – resulted in a treasure trove of images. Its next perijove is coming up on December 26. Get updated here, and view Juno’s latest amazing images. 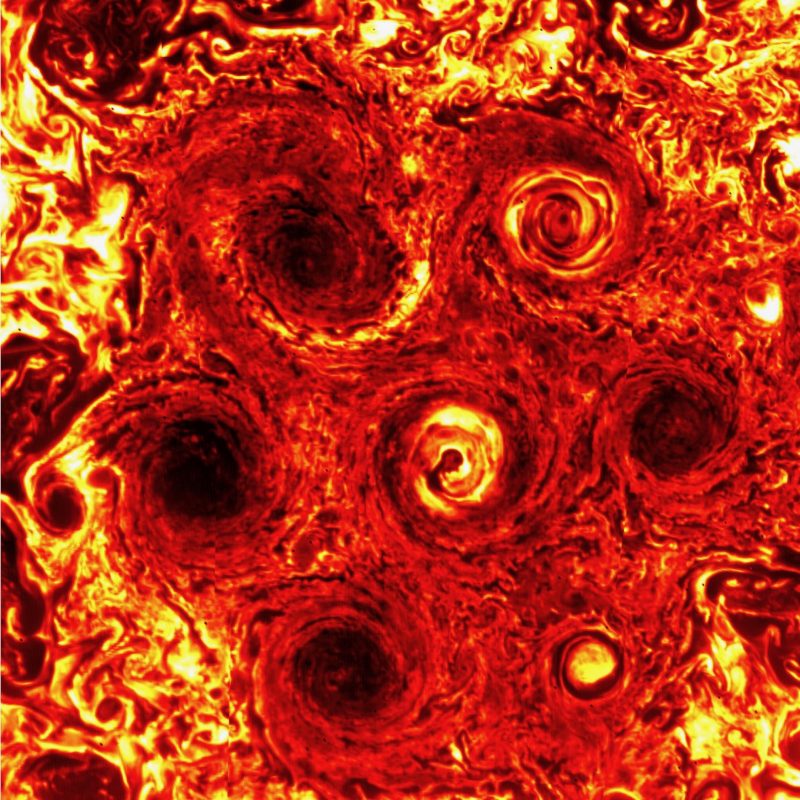 Jupiter’s south pole as seen from the Juno spacecraft on November 4, 2019. These swirling spots are cyclones at Jupiter’s pole. The whole hexagonal arrangement of cyclones is large enough to dwarf the Earth. The central cyclone can be compared to the continental U.S. The smallest one, in the lower right – a new one, seen for the first time in November – can be compared to Texas. Image via NASA/ JPL-Caltech/ SwRI/ ASI/ INAF/ JIRAM.

The Juno spacecraft – which has been orbiting the giant planet Jupiter since July of 2016 – acquires close-up images of the planet at every perijove, or closest point to Jupiter. That happens about every 53 days. The batch of images acquired by the craft in early November, when it swung to within 2,175 miles (3,500 km) of the cloudtops at Jupiter’s south pole, are particularly mind-blowing. The big news for the November flyby … the craft discovered that Jupiter’s south pole has seven large, well defined cyclones now, instead of the six seen previously. These cyclones appear in a hexagonal (six-sided) pattern at Jupiter’s pole, rather than the pentagonal (five-sided) pattern seen previously. A statement from NASA explained:

When Juno first arrived at Jupiter in July 2016, its infrared and visible-light cameras discovered giant cyclones encircling the planet’s poles – nine in the north and six in the south. Were they, like their Earthly siblings, a transient phenomenon, taking only weeks to develop and then ebb? Or could these cyclones, each nearly as wide as the continental U.S., be more permanent fixtures?

With each flyby, the data reinforced the idea that five windstorms were swirling in a pentagonal pattern around a central storm at the south pole and that the system seemed stable. None of the six storms showed signs of yielding to allow other cyclones to join in …

Then, during Juno’s 22nd science pass, a new, smaller cyclone churned to life and joined the fray.

Alessandro Mura, a Juno co-investigator at the National Institute for Astrophysics in Rome, said:

Data from Juno’s Jovian Infrared Auroral Mapper [JIRAM] instrument indicates we went from a pentagon of cyclones surrounding one at the center to a hexagonal arrangement.

This new addition is smaller in stature than its six more established cyclonic brothers: It’s about the size of Texas.

Maybe JIRAM data from future flybys will show the cyclone growing to the same size as its neighbors. 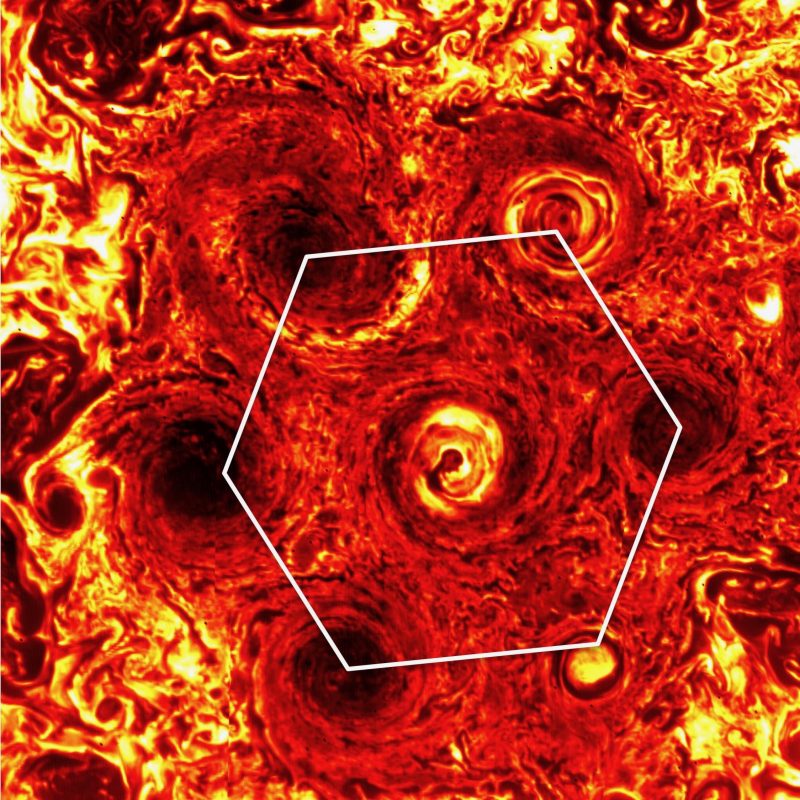 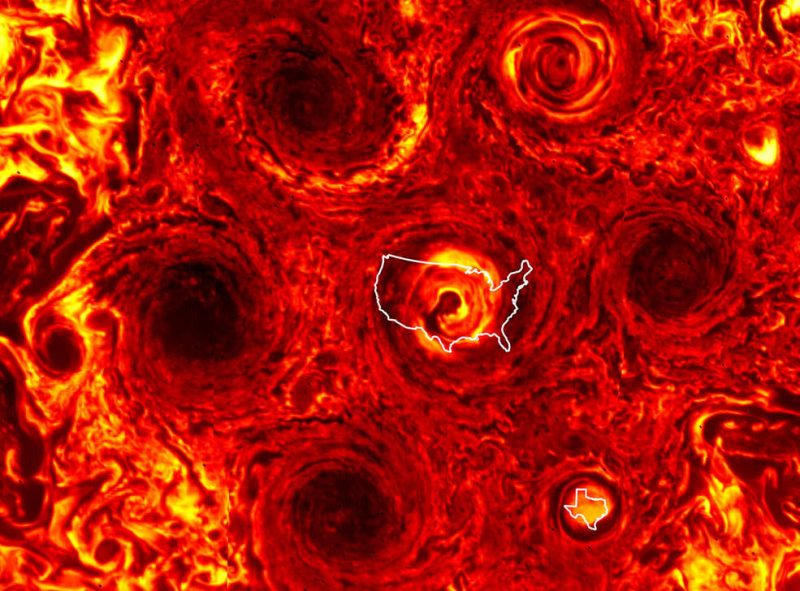 To give some sense of the immense scale of cyclones arranged in a hexagonal pattern at Jupiter’s south pole, an outline of the continental United States is superimposed over the central cyclone and an outline of Texas is superimposed over the newest cyclone. The hexagonal arrangement of the cyclones is large enough to dwarf the Earth. This JIRAM image was obtained during the 23rd science pass of the Juno spacecraft over Jupiter, on November 4, 2019. Image via NASA/ JPL-Caltech/ SwRI/ ASI/ INAF/ JIRAM.

… also marked a victory for the mission team, whose innovative measures kept the solar-powered spacecraft clear of what could have been a mission-ending eclipse.

To understand what happened, you have to go back to Juno’s entry into orbit around Jupiter on July 4, 2016. It was meant to enter an initial 53-day orbit, then reduce the size of its orbit a few months later, in order to shorten the period between science flybys to every 14 days. But the project team recommended to NASA to forgo the main engine burn due to concerns about the spacecraft’s fuel delivery system.

Now Juno is carrying out its mission, NASA said, although it’s taking longer than originally plannned. But Juno’s longer life at Jupiter is what led to the need to avoid Jupiter’s shadow. Steve Levin, Juno project scientist at NASA’s Jet Propulsion Laboratory in Pasadena, California, explained:

Ever since the day we entered orbit around Jupiter, we made sure it remained bathed in sunlight 24/7. Our navigators and engineers told us a day of reckoning was coming, when we would go into Jupiter’s shadow for about 12 hours. We knew that for such an extended period without power, our spacecraft would suffer a similar fate as the Opportunity rover, when the skies of Mars filled with dust and blocked the sun’s rays from reaching its solar panels. 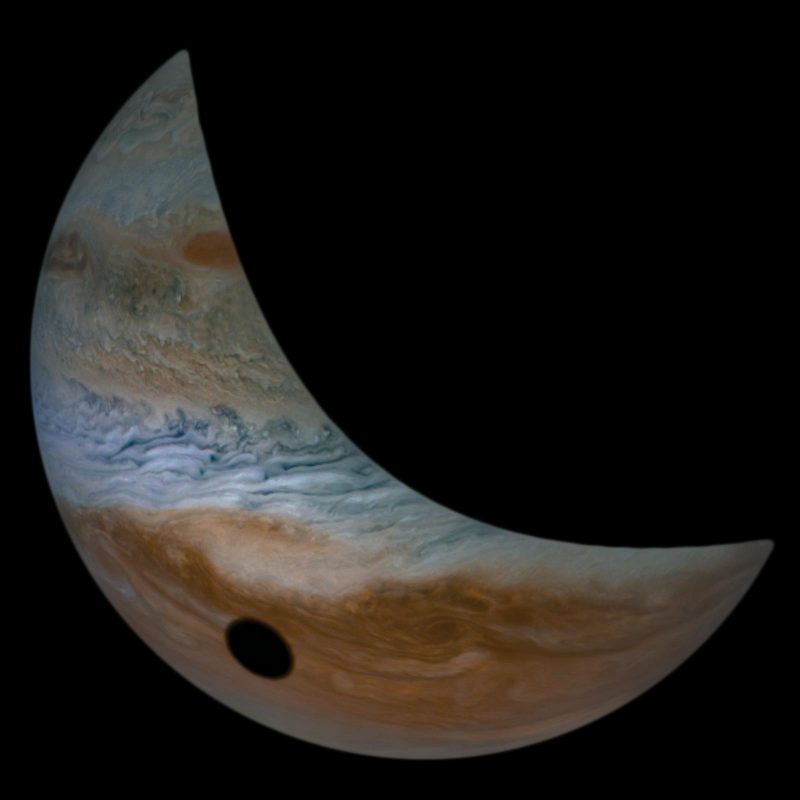 View larger. | In this image, you can see a shadow on Jupiter, cast by its moon Io. Io’s shadow can be seen on Jupiter through earthly telescopes, and many pictures have been taken of it from space as well, but this is the first from such a close distance, just 8,450 miles (13,600 kilometers) above Jupiter’s cloudtops. JunoCam acquired this image on September 12, 2019. Image via NASA/ JPL-Caltech/ SwRI/ MSSS. Image processing by citizen scientist Tanya Oleksuik.

NASA explained that, without the sun’s rays providing power, Juno would be chilled below tested levels. The space scientists believed that – during this time – Juno’s battery cells would be drained beyond recovery. So the navigation team set devised a plan to “jump the shadow,” maneuvering the spacecraft just enough so its trajectory would miss the eclipse. NASA said:

The navigators calculated that if Juno performed a rocket burn weeks in advance of November 3, while the spacecraft was as far in its orbit from Jupiter as it gets, they could modify its trajectory enough to give the eclipse the slip. The maneuver would utilize the spacecraft’s reaction control system, which wasn’t initially intended to be used for a maneuver of this size and duration.

The combination of creativity and analytical thinking has once again paid off big time for NASA … While the team was trying to figure out how to conserve energy and keep our core heated, the engineers came up with a completely new way out of the problem: Jump Jupiter’s shadow.

It was nothing less than a navigation stroke of genius. Lo and behold, first thing out of the gate on the other side, we make another fundamental discovery.

As you read this, Juno is heading toward its next perijove on December 26, 2019. Watch for news and new images shortly after the new year dawns! 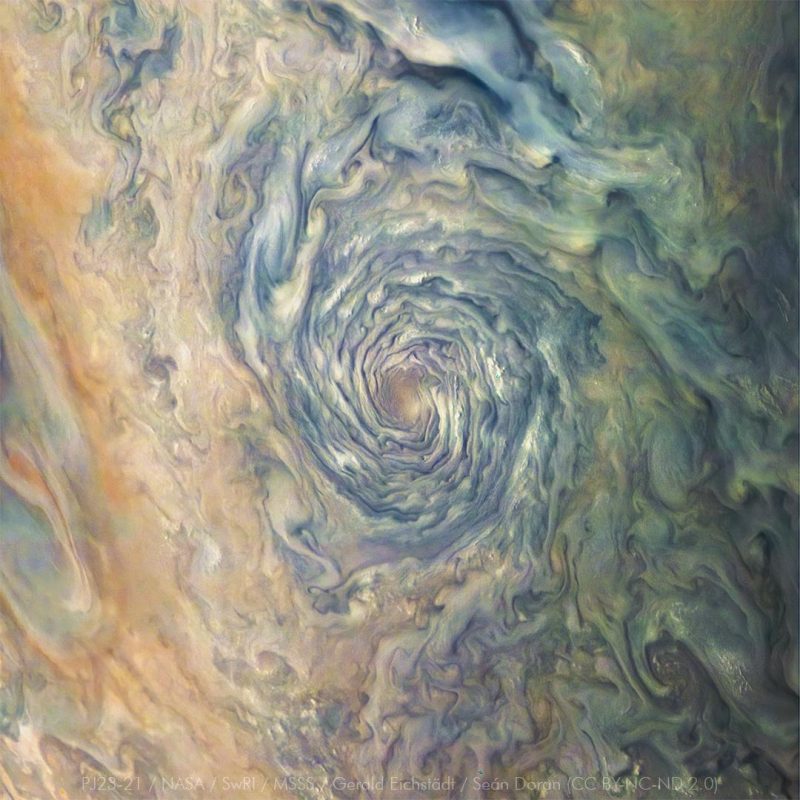 View larger. | Swirls and storms in Jupiter’s clouds. This image of a vortex on Jupiter, taken by the Juno mission camera, JunoCam, captures the amazing internal structure of the giant storm. Original image taken on November 3, 2019, at an altitude of approximately 5,300 miles (8,600 km) and a latitude of about 48 degrees north on Jupiter. Image via NASA/ JPL-Caltech/ SwRI/ MSSS/ Junocam. Image processing by citizen scientists Gerald Eichstädt/ Seán Doran. 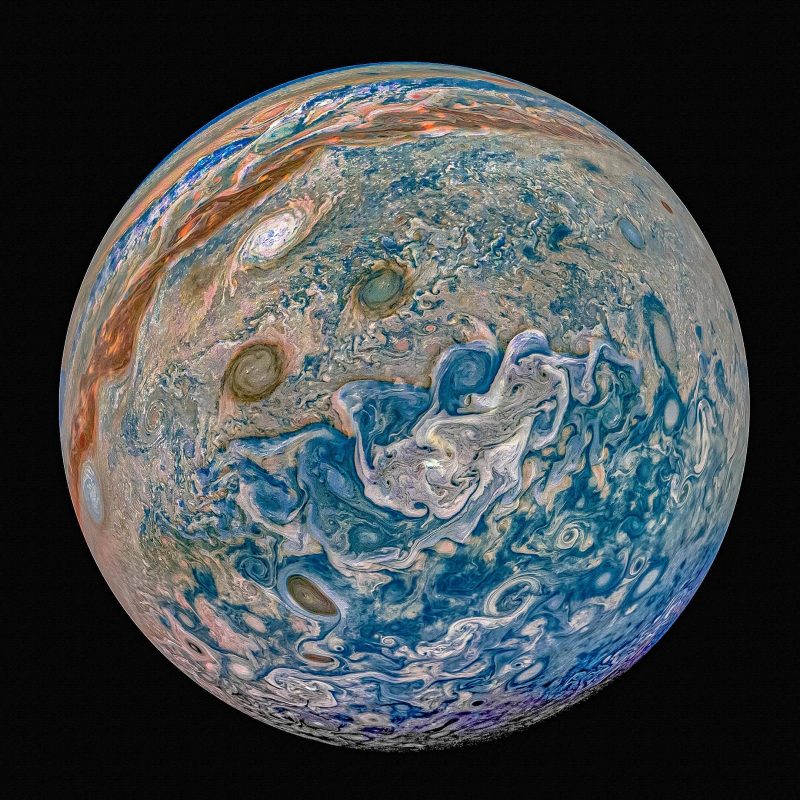 In this amazing Juno image, south is up. The original image was captured by JunoCam on September 12, 2019. Image via NASA/ JPL-Caltech/ SwRI/ MSSS/ JunoCam. Image processing by citizen scientist Prateek Sarpal, who titled this “A mind of limits, a camera of thoughts.”

Bottom line: On its last flyby close to Jupiter – on November 4, 2019 – the Juno spacecraft discovered a new small cyclone at Jupiter’s south pole.

See all the latest images from NASA’s Juno spacecraft