A sudden safe mode halted planned data collection during the spacecraft’s perijove – or closest point to Jupiter – on October 19. Next perijove December 11. 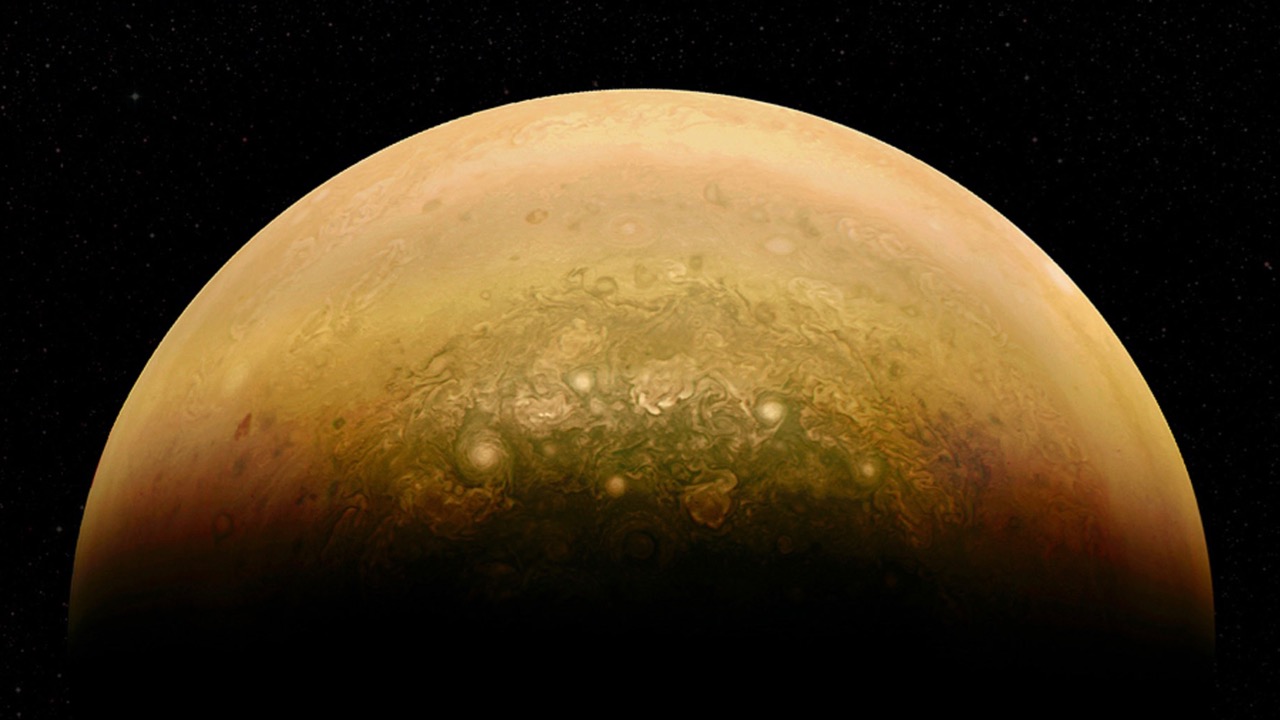 A citizen scientist (Alex Mai) created this beautiful image of the sunlit part of Jupiter and its swirling atmosphere using data from Juno’s JunoCam instrument. Image via NASA/JPL-Caltech/SwRI/MSSS/Alex Mai.

NASA’s Juno spacecraft – which has been orbiting Jupiter since July 4 – went into safe mode just 13 hours before a scheduled close pass near the planet today. Science data collection at perijove – the spaceraft’s closest approach to Jupiter in its highly elliptical, 53-day orbit – had been scheduled for today (October 19, 2016). But, due to the safe mode, Juno’s instruments were turned off, and no data collection took place.

NASA is not entirely sure what caused the problem, but said in a statement that early indications suggest:

… a software performance monitor induced a reboot of the spacecraft’s onboard computer. The spacecraft acted as expected during the transition into safe mode, restarted successfully and is healthy. High-rate data has been restored, and the spacecraft is conducting flight software diagnostics.

Rick Nybakken, Juno project manager from NASA’s Jet Propulsion Laboratory, said the team does not believe the problem is related to the intense and deadly radiation environment around Jupiter:

At the time safe mode was entered, the spacecraft was more than 13 hours from its closest approach to Jupiter. We were still quite a ways from the planet’s more intense radiation belts and magnetic fields.

NASA said Juno is designed to enter safe mode if its onboard computer perceives conditions are not as expected. In this case, the safe mode turned off instruments and a few non-critical spacecraft components, and it confirmed the spacecraft was pointed toward the sun to ensure the solar arrays received power. NASA said:

The next close flyby is scheduled on December 11, with all science instruments on.

The Juno science team is continuing to analyze returns from Juno’s first close flyby of Jupiter on August 27. It said:

Revelations from that flyby include that Jupiter’s magnetic fields and aurora are bigger and more powerful than originally thought. Juno’s Microwave Radiometer instrument (MWR) also provided data that give mission scientists their first glimpse below the planet’s swirling cloud deck. The radiometer instrument can peer about 215 to 250 miles (350 to 400 km) below Juno’s clouds.

With the MWR data, it is as if we took an onion and began to peel the layers off to see the structure and processes going on below. We are seeing that those beautiful belts and bands of orange and white we see at Jupiter’s cloud tops extend in some version as far down as our instruments can see, but seem to change with each layer.

On Twitter today, many veteran space watchers were feeling grumpy about Juno’s safe mode just hours before perijove. But – with the nail-biting that’s gone on all day, as we wait for news of the fate of the Schiaparelli lander on Mars – who can blame them?

Bottom line: Juno spacecraft entered safe mode just 13 hours before perijove – its closest point to Jupiter – on October 19, 2016. The safe mode turned off the craft’s instruments and called a halt to planned science data collection during the perijove. Next perijove will be December 11.