Meet Hippocamp, the smallest known moon of the planet Neptune. Scientists have puzzled over its origin, and over why we see it orbiting where we do. Now, new Hubble data has shed light on these mysteries. 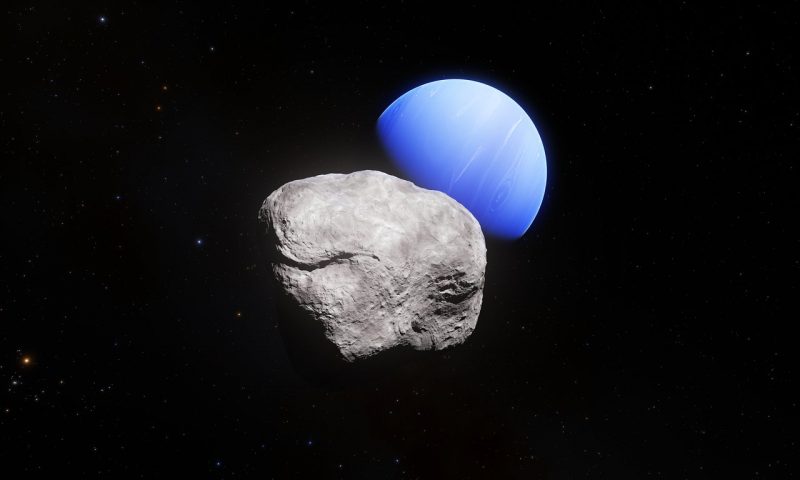 The origin of Neptune’s smallest known moon – Hippocamp – has been a mystery since this moon was first discovered in 2013. It orbits close to a larger Neptune moon, whose presence should have knocked Hippocamp out of orbit. That’s why astronomers have referred to it as “the moon that shouldn’t be there.” Now a new study – published February 20, 2019, in the peer-reviewed journal Nature – describes a possible solution to the mystery.

The study discusses scientists’ most recent ideas about where the moon came from, and why we still see it where we see it. Data for the study came from both the Hubble Space Telescope and the Voyager 2 spacecraft, which sped past Neptune in 1989.

Mark Showalter of the SETI Institute led the research team. 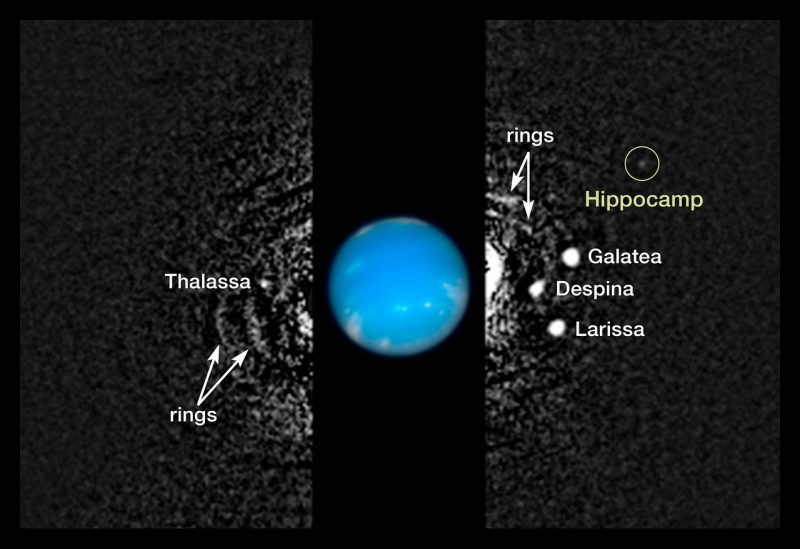 Illustration of the location of Hippocamp, along with some of the other inner moons and rings of Neptune. Image via NASA/ESA/M. Showalter (SETI Institute).

Hippocamp is very tiny, only about 20 miles (34 km) in diameter. Its orbit is very close to that of Proteus, Neptune’s second-largest moon and the outermost of the planet’s inner moons. Proteus is 260 miles (418 kilometers) in diameter.

The orbits of Hippocamp and Proteus are only 7,456 miles (12,000 km) apart, which didn’t make sense, since normally it would be expected that the much larger moon would knock the much smaller one out of orbit, or the smaller one would collide with the larger one. But, apparently, that didn’t happen with Hippocamp. As noted by Showalter:

The first thing we realized was that you wouldn’t expect to find such a tiny moon right next to Neptune’s biggest inner moon. In the distant past, given the slow migration outward of the larger moon, Proteus was once where Hippocamp is now. 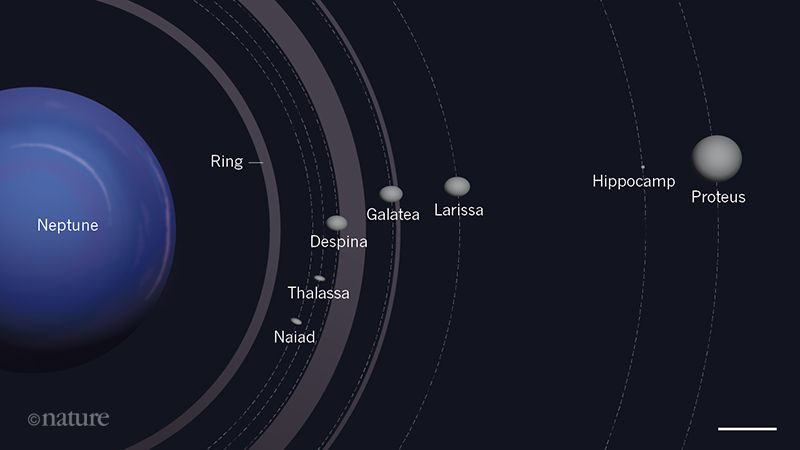 Diagram of the inner moons of Neptune, including Hippocamp. Image via Nature.

So what is the explanation? The research team concluded that rather than being two moons that formed separately, Hippocamp is instead a “chip” knocked off of Proteus by an asteroid or comet billions of years ago. When Voyager 2 looked at Proteus with its cameras in 1989, it saw a large impact crater, which earthly astronomers call Pharos. If this scenario is correct, the rocky object that hit Proteus almost destroyed it, but instead, a smaller piece was broken off that became Hippocamp. According to Showalter:

In 1989, we thought the crater was the end of the story. With Hubble, now we know that a little piece of Proteus got left behind and we see it today as Hippocamp. 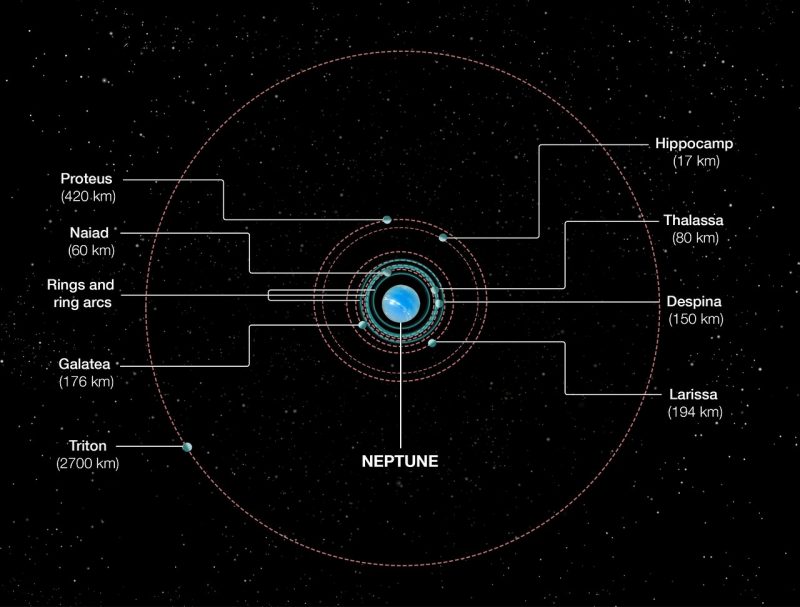 The orbital positions of Neptune’s inner moons, along with Triton, the planet’s largest moon. Image via NASA/ESA/A. Feild (STScI).

The entire moon system of Neptune has had a violent history – Proteus is thought to have formed from the debris left over after Neptune’s largest moon Triton was captured from the Kuiper Belt billions of years ago. If that happened, it also shattered Neptune’s other smaller moons at the time.

The other Neptune moons we see today are thought to be “second-generation” moons, which all formed from the debris of that early catastrophe. But since Hippocamp formed even later than those moons, it’s now considered to be a “third-generation” moon. As explained by Jack Lissauer of NASA’s Ames Research Center, a co-author of the new research:

Based on estimates of comet populations, we know that other moons in the outer solar system have been hit by comets, smashed apart, and re-accreted multiple times. This pair of satellites provides a dramatic illustration that moons are sometimes broken apart by comets.

The name Hippocamp originates from a half-horse, half-fish creature from Greek mythology; all the moons of Neptune are named after Greek and Roman mythological figures of the undersea world.

Thanks to the Hubble Space Telescope and Voyager 2, the mystery of the moon Hippocamp’s origin seems to have been solved. The data also provide more insight into how chaotic the history of Neptune’s moon system has been over the course of billions of years. While some moons may be obliterated – or nearly so – others can be created. 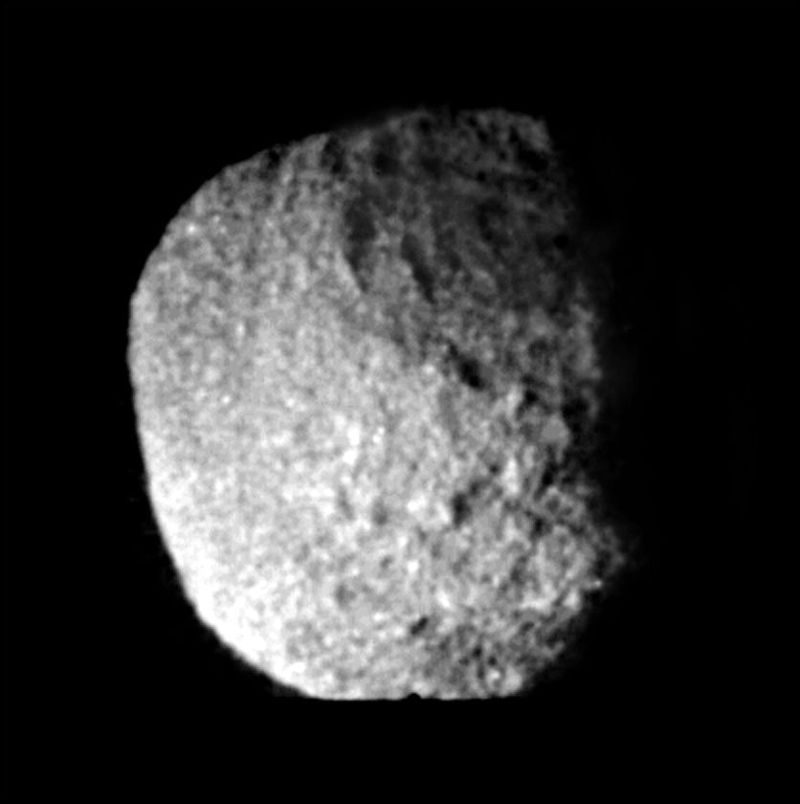 Neptune’s moon Proteus, seen by Voyager 2 in 1989. Hippocamp is thought to be a tiny piece of Proteus that was broken off during an impact from an asteroid or comet. Image via NASA.

Bottom line: The origin of Neptune’s smallest known moon – Hippocamp – has long been a mystery, but now thanks to the Hubble Space Telescope, astronomers think it was a piece broken off a larger, nearby moon called Proteus by an asteroid or comet impact.

Via Nature, SpaceTelescope.org and HubbleSite