The distant galaxy in this image is nicknamed the Sunburst Arc. It’s been lensed into multiple images by a massive, intervening galaxy cluster. A recent study revealed that the 4 bright arcs in this Hubble image contain 12 images – cosmic doppelgangers – of this very distant galaxy. 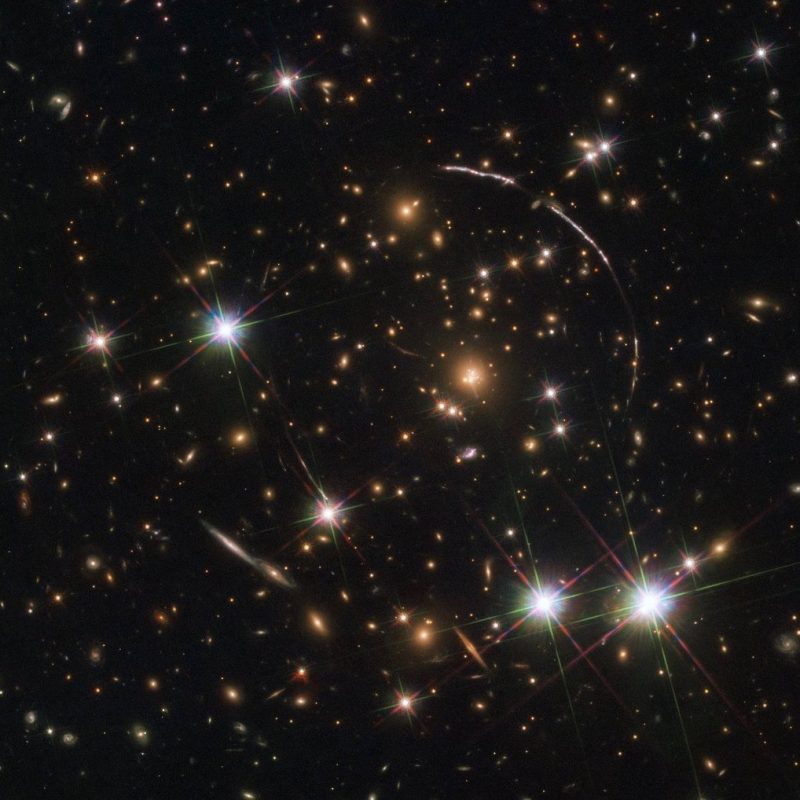 View larger. | A Hubble Space Telescope image of the 4 visible arcs associated with the Sunburst Arc galaxy. This exceedingly distant galaxy helps create one of the brightest gravitational lenses known. Within these 4 visible arcs are at least 12 images – 12 doppelgangers, or illusory images – of the galaxy. Image via ESA/NASA/E. Rivera-Thorsen et al./SpaceTelescope.org.

Not all the lights in this Hubble Space Telescope image – released on November 7, 2019 – are stars. Many are galaxies in a galaxy cluster 4.6 billion light-years away. See the four partial arcs in the image, three in the upper right and the fourth on the lower left? These arcs are an illusion in space, created via the light of an even-more-distant galaxy – 11 billion light-years away – behind the galaxy cluster. The light of the very distant galaxy is bent by the closer, super-massive cluster. This is an example of gravitational lensing, predicted by Einstein’s relativity theory. The distant galaxy creates one of the brightest gravitational lenses known, which is why astronomers call it the Sunburst Arc.

Scientists recently studied the Sunburst Arc, using the Hubble Telescope. Their peer-reviewed study revealed the 12 doppelganger galaxies within those four arcs of light. The study was published in the journal Science on November 8.

Emil Rivera-Thorsen (find him on Twitter as @thoeger) is an astrophysicist at the University of Oslo in Stockholm, Sweden. He’s also lead author on the new paper. He said in an email to EarthSky:

The galaxy we see lensed and distorted is a background galaxy … At approximately 4.6 billion light-years, the galaxy cluster that does the lensing is significantly closer to Earth. The combined mass of the galaxies in the foreground cluster – most of which appear reddish in the ESA image – bends the light from the distant background galaxy, magnifying it and creating the ‘kaleidoscope’ effect.

The arc, which consists of 12 different ‘kaleidoscope’ images of the same background galaxy – is indeed the brightest gravitationally lensed system known. This was established in a paper led by Håkon Dahle in 2016.

Besides being record bright and imaged in a spectacular 12 copies, the galaxy in itself is also interesting from an astrophysical point of view. To put it shortly, the neutral hydrogen that is abundant in galaxies has in this case been pierced, allowing us a direct look into the hot, star forming heart of the galaxy, unhindered by neutral hydrogen. This is important when trying to look at extremely high-energy ultraviolet light, which is absorbed by hydrogen. We published indirect evidence for such a hole in our paper from 2017.

…The cluster's member galaxies happen to sit in a very lucky way that breaks the lensed image into 12 copies. The whole thing is so bright we could observe the escaping Lyman continuum in just a few hours' time with the @HubbleTelescope . What are the odds. pic.twitter.com/outT8Wwg1J

Consider what’s happening here. Using the Hubble Telescope and the effect of gravitational lensing – the bending of the light of a distant object in space (the galaxy) by a massive intervening object (the galaxy cluster) – these astronomers can peer at distant objects otherwise too faint and too small even for Hubble’s instruments. That’s because, they said:

The lens makes various images of the Sunburst Arc between 10 and 30 times brighter.

Their statement explained how that brightening via gravitational lensing lets the Hubble telescope view structures within the distant galaxy as small as 520 light-years across! That’s an incredibly rare, detailed observation for an object 11 billion light-years away. In fact, that resolution – the seeing of features as small as 520 light-years across – compares reasonably well, these astronomers said, with star forming regions in galaxies in the space near our own Milky Way galaxy.

Contemplate the images below … the multiple arcs of the Sunburst Arc, each one containing ghost images of the galaxy. Don’t we live in an interesting universe? 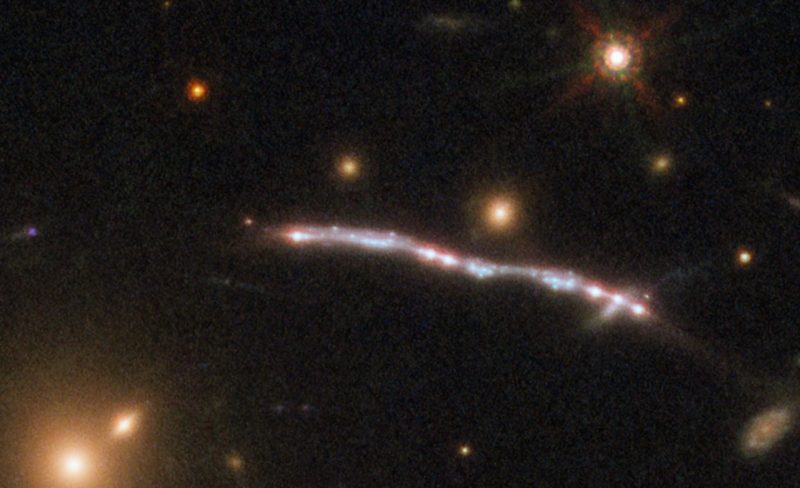 Here’s a close-up of a Hubble image, showing one of 4 arcs formed of the light from the Sunburst Arc galaxy. Created by strong gravitational lensing, this bright arc of light contains at least 6 copies of the image of the very distant galaxy. Image via ESA/NASA/E. Rivera-Thorsen et al./SpaceTelescope.org. 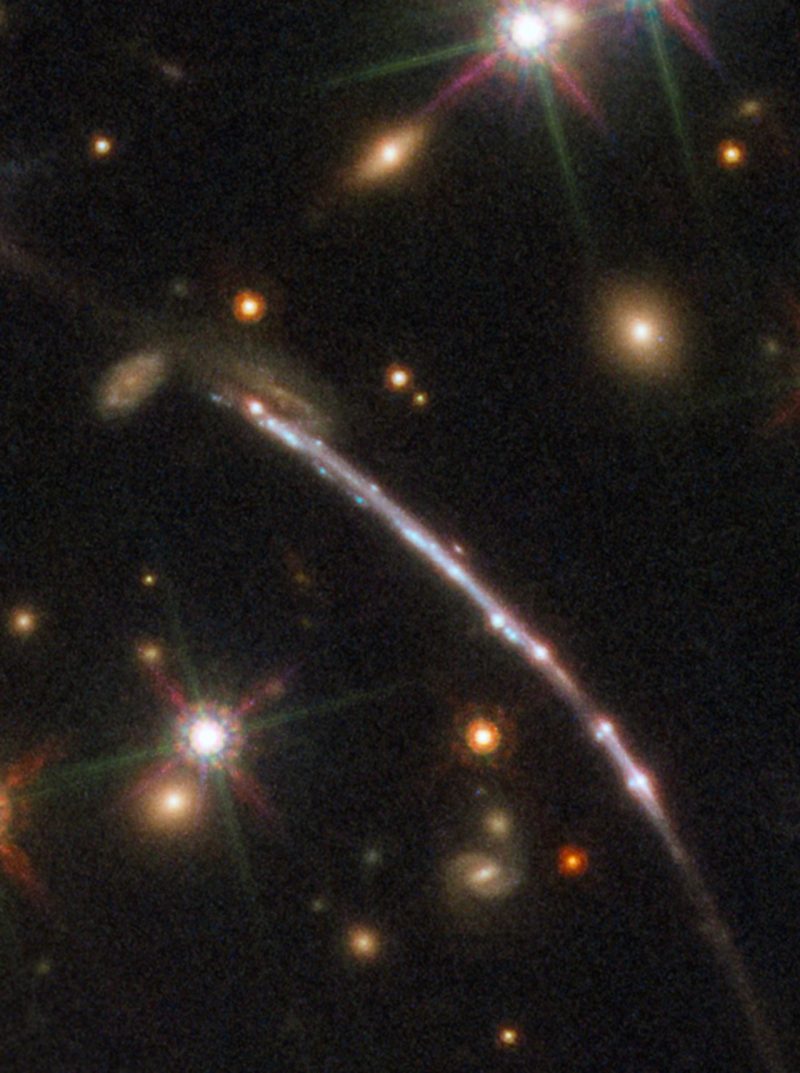 Hubble Space Telescope image of yet another of the 4 arcs formed of the light from the Sunburst Arc galaxy. This isn’t a material object in space. It’s an illusion of light and gravity, created by what’s called gravitational lensing. This bright arc of light contains at least 4 copies of the image of the Sunburst Arc galaxy. Image via ESA/NASA/E. Rivera-Thorsen et al/SpaceTelescope.org. 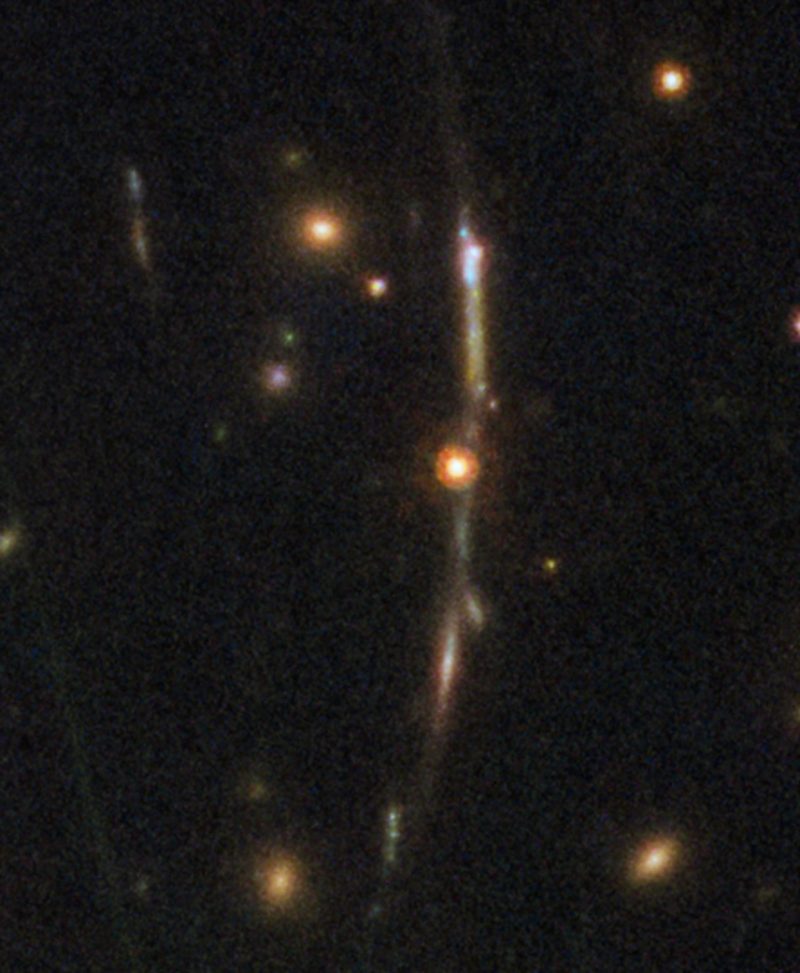 This Hubble Space Telescope images shows another one of 4 arcs formed of the light from the Sunburst Arc galaxy. Created by strong gravitational lensing, this bright arc of light shows “at least” one copy of the image of the galaxy. There’s also a foreground star in this image, partially blocking the view of the arc. Image via ESA/NASA/E. Rivera-Thorsen et al./SpaceTelescope.org.

By the way – because looking at a distant object in space is the same as looking backwards in time – the gravitational lensing effect of the Sunburst Arc gives astronomers a window on the very early universe. A galaxy that’s 11 billion light-years away is seen not as it is now, but as it was 11 billion years ago. The astronomers said this essential fact about our universe – which happens because light doesn’t travel infinitely fast, but instead at a finite speed (186,000 miles per second or about 300,000 km/s) – is letting these astronomers study a time in the early universe known as the epoch of reionization. That epoch began only 150 million years after the Big Bang.

To learn more about that aspect of this study, read toward the bottom of the astronomers’ statement.

Bottom line: The Sunburst Arc galaxy is part of a gravitational lens system. That is, it’s located behind a massive galaxy cluster, as seen from Earth, and the intervening cluster has bent its light into multiple arcs. A recent study revealed that the 4 bright arcs in this Hubble image contain 12 images of the galaxy – cosmic doppelgangers – 11 billion light-years away.