New research solves a decades-long riddle: from where do the highest-energy cosmic rays originate? Even supernovae – exploding stars – can’t explain them. Now it seems these sorts of cosmic rays may come from clusters of young, hot, massive stars. 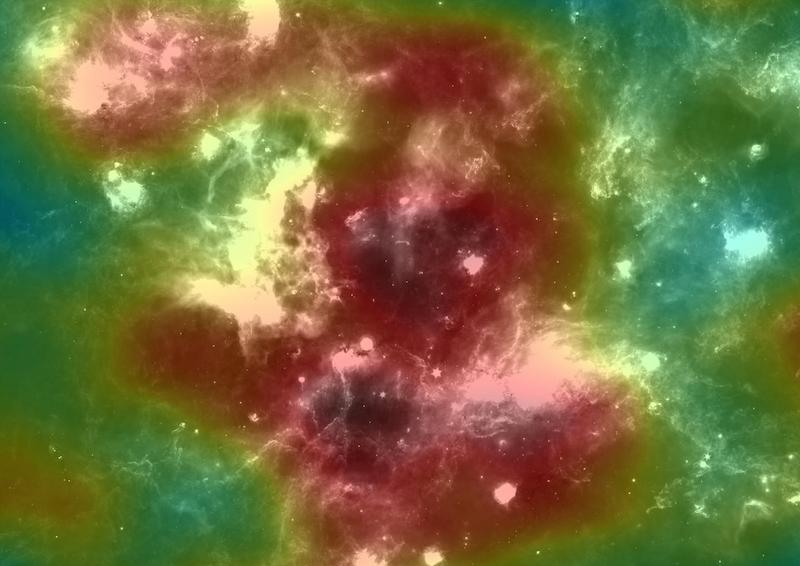 Cygnus OB2 is the nearest star-forming region to us. It’s what’s called an OB association, meaning it contains some of the most massive and luminous stars known. Scientists found cosmic rays of the highest energies to originate from this region of space. The colors – green to yellow to red – represent high-energy gamma-ray emission as seen by the HAWC observatory, overlaid on an infrared image from the Spitzer telescope (the white regions). Image via B. Hona (HAWC Collaboration)/ Hora et. al (Spitzer)/ Los Alamos National Laboratory.

Astronomers have long assumed that supernova explosions are responsible for cosmic rays – which are high-energy particles – zipping through space at the speed of light and regularly bombarding Earth from various directions in the galaxy. But supernovae can’t explain cosmic rays with the highest energies. Even a supernova powerful enough to light up our entire Milky Way galaxy isn’t strong enough to propel cosmic rays to the enormous energies that earthly observatories measure. A new study – announced on March 11, 2021 – suggests that clusters of young, hot, massive stars act as natural particle accelerators, capable of accelerating the particles to the energy levels required for the highest-energy cosmic rays.

The High-Altitude Water Cherenkov (HAWC) observatory – a collection of large high-tech water tanks on a mountainside in Mexico – detected the cosmic rays coming from Cygnus OB2, a birthplace of massive stars located inside a vast superbubble in the direction of the constellation Cygnus (within what’s called the Cygnus Cocoon, in the neighborhood of the Cocoon Nebula). A large team of scientists published the paradigm-shifting research – cosmic rays of the highest energies from a star cluster, not a supernova – in the peer-reviewed journal Nature Astronomy this month. 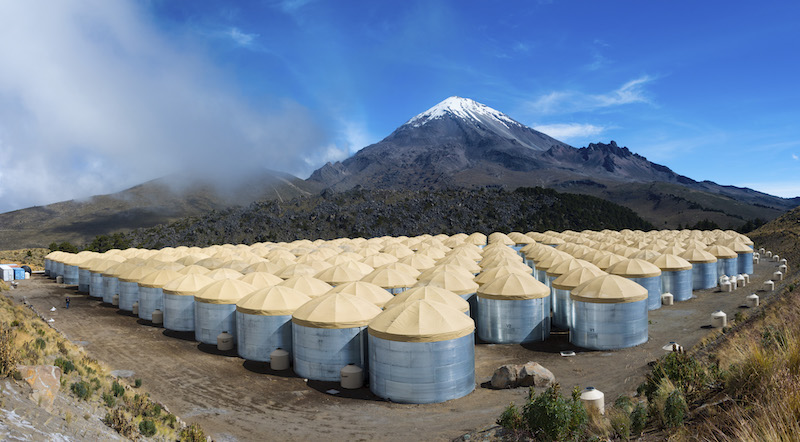 The High-Altitude Water Cherenkov (HAWC) Gamma Ray Observatory is located at an altitude of 4100 meters (13,500 feet) near the Sierra Negra volcano in Puebla, Mexico. Cosmic ray detectors are a bit different from mainstream observatories and consist, for example, of many large high-tech water tanks instead of a telescope mirror. Image via J. Goodman/ HAWC.

Team member Patrick Harding, an astrophysicist at Los Alamos National Laboratory who uses HAWC for his research, said in a statement:

The origin of the highest-energy cosmic rays in the galaxy has been an open question in astrophysics for more than 60 years. Very few regions of the galaxy have both the power to produce high-energy particles and the necessary environments to boost those particles to the petaelectronVolt (PeV) energies that are seen in the highest-energy cosmic rays. And most of the expected regions to produce the particles have been ruled out in recent years by high-energy observatories.

Hence the idea that these very high-energy cosmic rays come from star clusters is both surprising and welcome to astronomers. It provides a possible answer where none existed before.

Sometimes called stellar cradles, star clusters like Cygnus OB2 are thought to be formed in the aftermath of supernova explosions. So, in essence, the high-energy cosmic rays are still connected to supernovae, albeit not formed in an explosion. Cygnus OB2 primarily contains two different types of large, massive, short-lived stars known as spectral type O and type B stars. These are large, hot, and white and blue in color. In a region only about 108 light-years across, there are hundreds of these O and B stars.

Inside an association of hot, young stars like Cygnus OB2, there are violent stellar winds and swirling debris.

Spectral type O stars are the most massive. When their winds interact with each other, shock waves form, which is where acceleration happens. 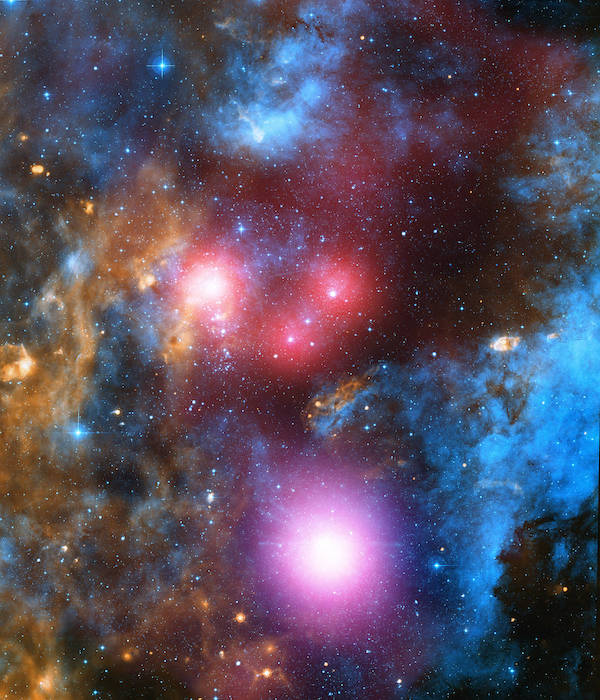 Cygnus OB2 is a star-forming region containing many bright stars much more massive than our sun. According to NASA, there are more than 60 of the most massive sorts of stars known (O-type stars) and about a thousand of the next-most massive B-type stars. These very massive stars blast violent high-energy winds into their surroundings. These winds can collide or produce shocks waves in the surrounding gas and dust. That’s where, according to this new study, the highest-energy cosmic rays are born. Image via Chandra/ Isaac Newton Telescope/ Spitzer /NASA.

Particle energies are measured in electron volts (eV). A molecule of oxygen or nitrogen in the air that we breathe has an energy of 0.03 eV. It can move as fast as a bullet but is still very slow compared to most particles. For astronomical particles, we need larger numbers, and with those come prefixes such as kilo, mega and giga, giving us the units keV (1000 eV, called kilo-electronvolts), MeV (1 million eV) and GeV (1 billion eV). For example, solar outbursts contain particles with energy levels of 10-15,000 MeV. When we talk about cosmic rays, however, we need to go to even higher levels of energy! Enter prefixes tera and peta, where 1 TeV is 1,000 GeV and one peta-electronvolt, the energy levels discussed in this article, is 1 million GeV, or 1,000,000,000,000,000 eV!

Kelly Malone, a postdoctoral researcher at Los Alamos who developed the algorithms used to analyze the highest-energy HAWC photons, said:

HAWC is the first observatory to detect gamma rays from across the sky with energies above 100 TeV. This high-energy reach allows us to answer fundamental questions about our galaxy.

Bottom line: Scientists have found the highest-energy cosmic rays to originate in powerful star-forming regions. Their origin has been a riddle for many decades because the previously assumed sources, supernovae, were found to be too weak to create the most powerful cosmic rays.

Source: HAWC observations of the acceleration of very-high-energy cosmic rays in the Cygnus Cocoon