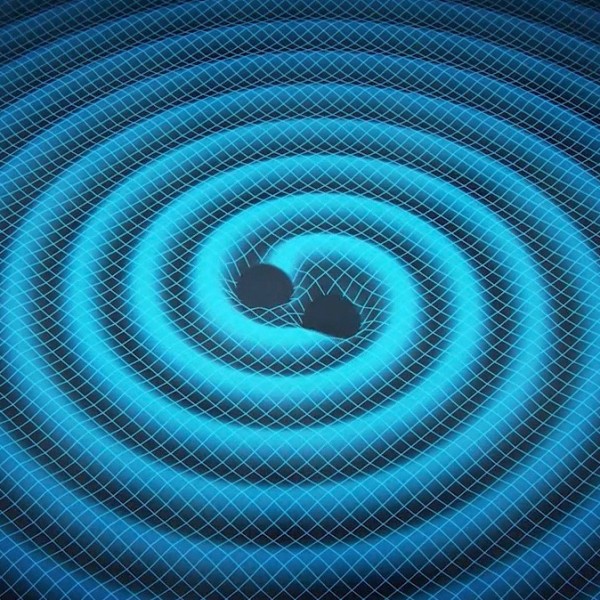 Gravitational waves are created in some of the most violent events in our universe, such as the merger of two black holes. Image via Swinburne Astronomy Productions / NASA JPL.

The science world has buzzed with rumors about this morning’s announcement by LIGO all week but now it’s for real. Scientists have detected gravitational waves. David Reitze, executive director of the LIGO Laboratory at Caltech, compared our newly acquired ability to detect these elusive waves to Galileo’s first use of a telescope 400 years ago. Few doubt that this discovery will be worth a Nobel Prize. These mysterious ripples in spacetime were predicted by Einstein’s theory of general relativity 100 years ago. They’ll let us explore the universe in a whole new way.

The announcement was scheduled at 10:30 ET (1530 UTC) for several places around the globe at once: at Hanford, Washington (site of one of the LIGO detectors), Washington D.C., as well as sites in Italy and Britain.

Twitter is always a great place to get the latest. You can follow what’s going on there using the hashtag #gravitationalwaves.

The video below gives you a taste of this morning’s event at the National Press Club in Washington D.C.

Wake up to find out that #GravitationalWaves are the new eyes of the world! #LIGO

Gravitational waves are created in the particularly violent events of our universe such as supernovae, collisions of neutron stars and mergers of black holes. They are vibrations in the fabric of the universe – ripples in spacetime – which move at the speed of light. By the time the waves reach Earth, the ripples are on the order of a billionth the diameter of an atom, and thus scientists have had to be exceedingly clever to find ways to detect these elusive ripples.

LIGO – which stands for Advanced Laser Interferometer Gravitational-Wave Observatory – originally went online in 2002 and ran until 2010 and found zero gravitational waves. That’s not surprising because the frequency of these waves coming to Earth from a given volume of space – the volume of space accessible by LIGO in its first run – was predicted to be exceedingly rare.

That’s why LIGO upgraded its instrumentation, increasing its sensitivity by 10 times. Basically, that Advanced LIGO can detect gravitational waves from a volume of space 1,000 greater than before, and thus the upgrade gives LIGO much more chance of spotting gravitational waves.

But scientists, by nature, are cautious people. They aren’t going to announce that they’ve discovered a gravitational wave until they’re absolutely sure.

And maybe now they are sure. Watch for Thursday’s big announcement!

The video below is by physicists Umberto Cannella and Daniel Whiteson. It does a great job explaining what gravitational waves are, and what LIGO does to detect them.

Finding gravitational waves would be a monumental scientific discovery. Why is it such a big deal?

Being able to detect gravitational waves would open a new window on the universe. It’d literally be as if we’ve been blind and now can see the universe … in a whole new way. Using gravitational waves, scientists can study black holes, neutron stars and the early universe as never before, and, for sure, that ability will lead to unanticipated discoveries, unexpected marvels. 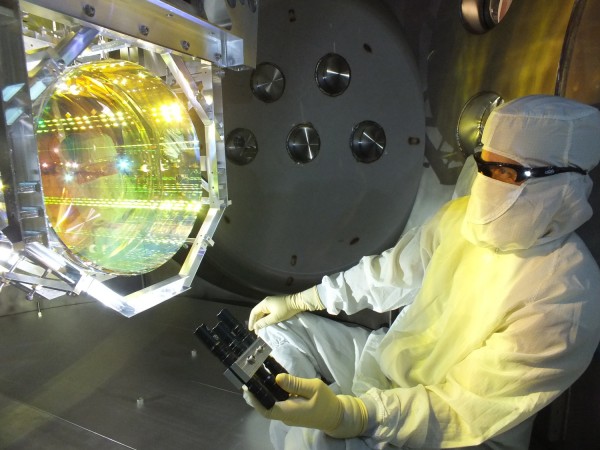 A LIGO optics technician inspects one of LIGO’s core optics (mirrors) by illuminating its surface with light. Image via Matt Heintze/Caltech/MIT/LIGO Lab.

Bottom line: LIGO is expected to announce the discovery of gravitational waves on Thursday, February 11, 2016. The announcement is scheduled at 10:30 ET (1530 UTC) in Hanford, Washington (site of one of the LIGO detectors) and Washington D.C. as well as sites in Italy and Britain. Follow on Twitter using the hashtag #gravitationalwaves. Also, check LIGO’s website for more.