Getting to know Pluto

After last summer’s Pluto flyby, the New Horizons spacecraft started sending data to Earth – at 2 kilobits per second. What scientists have learned so far from that rich, slow cache. 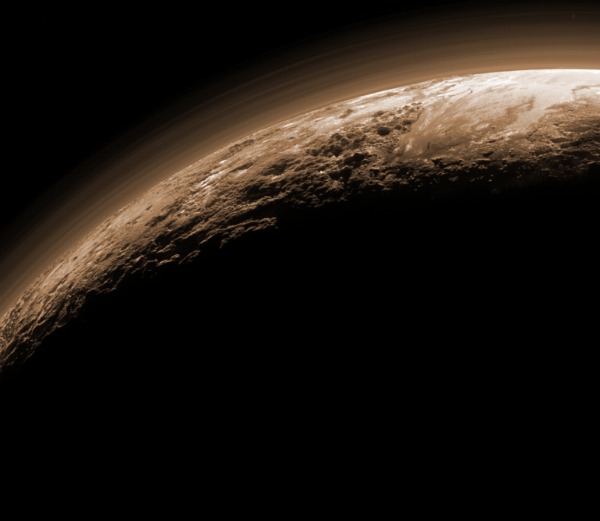 When the New Horizons spacecraft made its flyby of Pluto on July 14, 2015, there was worldwide celebration that we’d finally gotten our first detailed look at this completely new type of planet in the outer reaches of our solar system.

But for those of us on the New Horizons science team, that day and those first images were only the beginning. Since then, I’ve been watching with amazement as the New Horizons spacecraft has transmitted spectacular images back that reveal surprises all over the place. We’ve been making discovery after discovery about the dwarf ice planet Pluto and its moon Charon, and this is likely to continue as we get more data back from the spacecraft. Here’s a summary of just a few of our scientific results to date.

What do we see on Pluto’s surface?

Perhaps one of the biggest surprises that was obvious from the very first images was that Pluto has a surface that is incredibly diverse.

Some surface areas, such as those that are heavily cratered from asteroid impacts, seem to date back to just after Pluto formed, about 4.5 billion years ago. Other regions show evidence of geological activity that may have lasted throughout Pluto’s billions of years of history. Enormous ice volcanoes (cryovolcanoes) must have taken a large fraction of Pluto’s history to form. These volcanoes are driven by warm underground liquids, such as, perhaps, water and ammonia, instead of liquid rock-magma that we have on Earth, and their rough, crusty surface is made of stuff that has erupted from deep within Pluto’s interior. 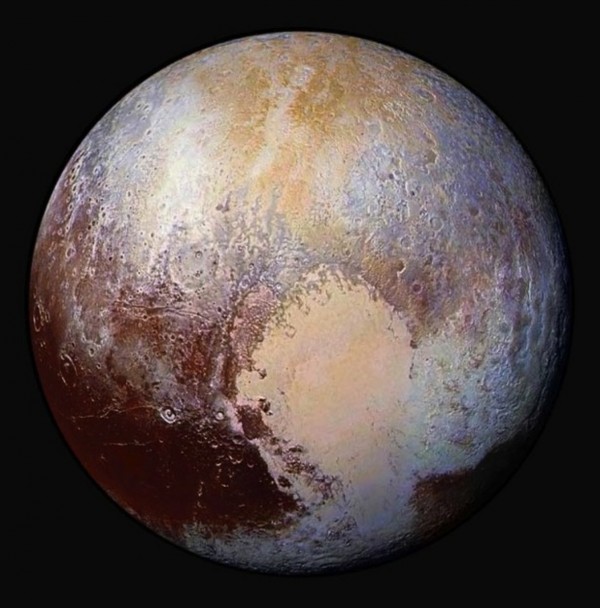 Other areas, such as the informally named Sputnik Planum – the heart-shaped, Texas-sized nitrogen ice glacier – show no evidence of asteroid impacts at all, suggesting continual surface activity, such as convection of ices from underground. This surface can’t be more than 10 million years old – a blink of the eye on a geological time scale!

Pluto is geologically active! I doubt there’s a single person on Earth who would have expected to see that!

What’s Pluto made of?

The diverse chemical compositions we’ve seen on Pluto are giving us some important clues to understanding Pluto’s geological history and climate. 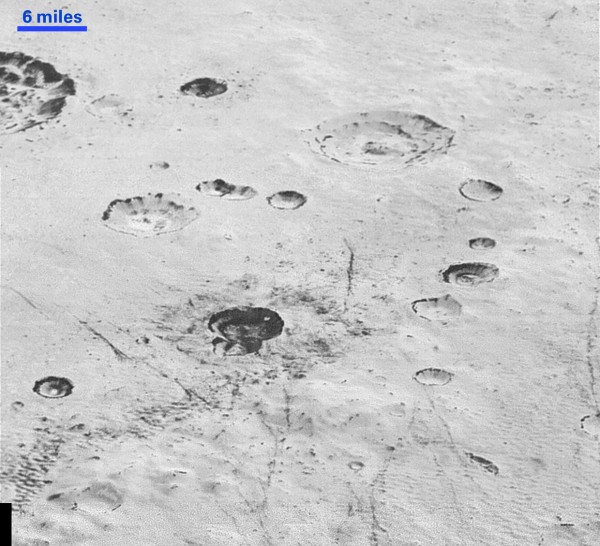 The high-resolution images from the New Horizons cameras show diverse ice reservoirs across Pluto’s surface. By studying the reflected spectra from the surface, we’ve identified several different types of ices: in particular, nitrogen, methane and carbon monoxide. The locations and characteristics of these ice reservoirs mean that there have been long epochs of ice transport across the dwarf planet’s surface.

A darker veneer on top of the ices is probably tholin material – organic compounds processed by solar radiation. These are produced slowly in Pluto’s atmosphere and gently rain down, even now, onto the surface. An enormous darker region, informally named Cthulhu Regio, has a meters-thick layer of this organic tholin material that has built up over billions of years. Frozen water is one of the strongest solids at the low temperatures we see on Pluto. We believe that the ice mountains that extend several miles above the surface are made of water ice – the biggest ice cubes in the solar system.

Charon, too, had some major surprises in store for us. Pluto’s largest moon has an extended equatorial region of smooth plains that may also be due to material that erupted from Charon’s interior via ice volcanoes that then flowed over its surface about four billion years ago. We suspect that was when Charon’s subsurface water ocean froze, causing global fractures as the moon expanded in size (water expands when it freezes).

Charon has dark poles that may be related to volatile gases that escaped from Pluto’s atmosphere only to be captured by the moon’s cold poles. These gases trigger chemical reactions on the surface that, we believe, produce the darker color of the poles.

How does Pluto’s atmosphere work?

The spacecraft’s Alice instrument made observations of sunlight passing through Pluto’s atmosphere. We see absorption features that indicate an atmosphere made up of nitrogen (like Earth’s) with methane, acetylene and ethylene as minor constituents.

Pluto’s small size and low gravity cause it to hold onto its atmosphere much more weakly than larger planets like the Earth (which has 16 times stronger gravity than Pluto). Prior to the New Horizons’ encounter, we expected this would produce an atmosphere that was greatly extended and rapidly escaping to space. But it turned out the upper atmosphere is much colder than we thought it would be and so more compact – the atmosphere does not extend nearly as far into space as we expected and the escape rate of atmospheric gases is extremely slow. But why the atmosphere is so cold is still a complete mystery.

As an atmospheric scientist, I found the most amazing discovery to be the brilliant, light blue, globally extensive haze that we can see because large numbers of small atmospheric particles scatter sunlight. This haze extends hundreds of kilometers into space, and embedded within it are over 20 very thin, but far brighter, layers. We suspect the thin layers are produced by some type of atmospheric wave that causes localized regions of condensation of some as-yet-unknown gas. The largest moon of Saturn, Titan, shows similar layering of haze in its upper atmosphere. So there may be some interesting comparative planetary studies that come out of the analysis of the Pluto data.

Where did Pluto’s moons come from?

The origin of Pluto’s five moons has been a long-standing question. But the flyby observations have given us some critical data that we needed in order to develop convincing explanations.

We believe that Charon is just about as old as Pluto, having formed when Pluto was very young. An impact between Pluto and another large Kuiper Belt object early in their history ejected an enormous amount of debris into orbit around Pluto. As time went on, this orbital debris coalesced into Charon.

Previous speculation was that the four smaller moons are actually asteroids captured by Pluto’s gravity as they passed too near the dwarf planet. But the New Horizons observations showed that these four moons have an unusually high reflectivity – much different than the extremely dark materials that we see on asteroids in the outer solar system. This has led to a compelling argument that the smaller moons are also made of debris from the same impact that formed Charon. 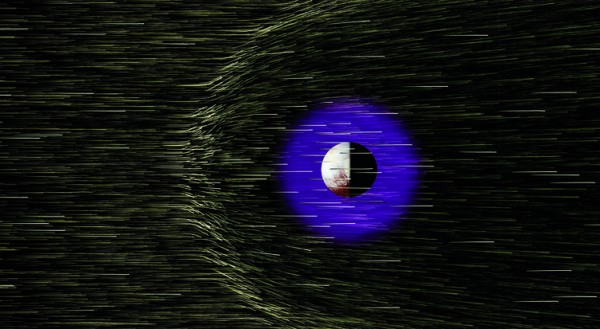 Pluto’s atmosphere is buffeted by protons and electrons streaming from the sun as the solar wind. Image credit: H.A. Weaver et al.

How does Pluto interact with its space environment?

As the New Horizons spacecraft approached Pluto, there was some concern that a small amount of debris might still remain in orbit around the dwarf planet. A collision between New Horizons and even one particle of debris the size of a grain of sand could cause considerable damage to, or possibly destroy, the spacecraft.

But the student-built Dust Counter, which measures small micrometer size dust particles in space, detected only a single particle during the flyby – and it was much too small to cause spacecraft damage. This means Pluto’s environment is now largely devoid of debris – all of it likely swept up by the moons early in the system’s history. 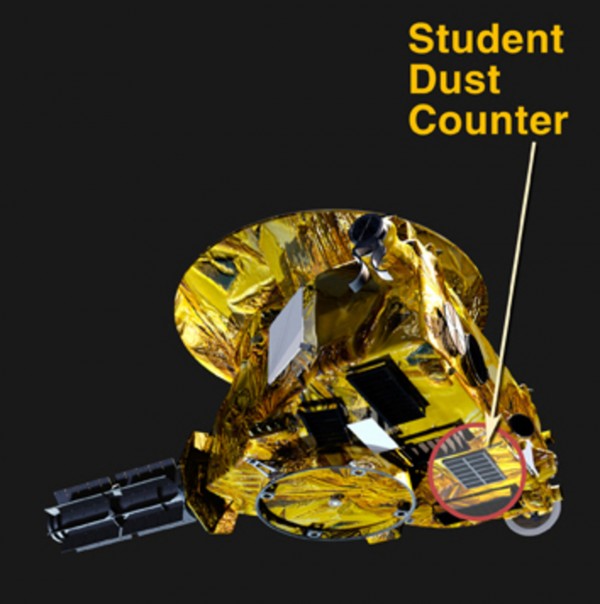 The Student Dust Counter is one part of the science payload New Horizons’ been carrying for a decade. Image credit: NASA/New Horizons

The New Horizons spacecraft also carried instruments to study what happens to the solar wind when it encounters Pluto’s atmosphere. The detailed way in which solar wind particles from the sun interact with a planet’s atmosphere provides important clues about the nature of that atmosphere, particularly how far it extends into space and the escape rate of atmospheric gases. The interaction region between Pluto and the solar wind was observed to be much smaller than expected, only about 12 Pluto diameters across. This means that the atmosphere is smaller than expected, and so these results confirm the Alice observations that the upper atmosphere is much colder than expected.

So much more yet to come

These are just a few of the many exciting, and unexpected, results from the New Horizons flyby of Pluto and Charon. The discoveries we’ve already made will mean that textbooks on planetary science must be rewritten. And yet this sampling of the New Horizons results is just from the tip of an ice mountain of data that we’ll be analyzing and writing papers about for many years, perhaps decades. The data are so rich in things we’ve never seen before that I’m sure there are many more surprises yet to come.