Gallery of planetary nebulas from Chandra and Hubble

Our sun will become a planetary nebula, billions of years from now. So, in a way, looking at these images is like looking at our own sun’s future.

When a star like our sun dies, it first swells into a red giant and later shed its outer layers into space. Then the star is no longer considered an ordinary star. It has become an object known to astronomers as a planetary nebula. Our sun will become one, billions of years from now. This gallery shows images of four planetary nebulas. The first image is a composite, shown in the x-ray part of the spectrum via data from NASA’s Chandra X-ray Observatory (purple) and in optical light via data from the Hubble Space Telescope (red, green and blue). 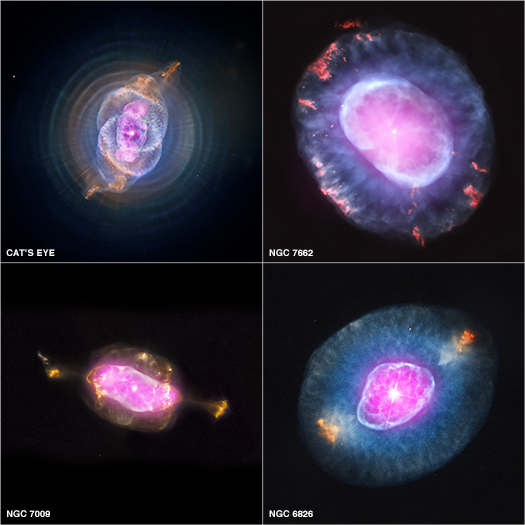 The planetary nebulas shown here are NGC 6543 (Cat’s Eye Nebula), NGC 7662, NGC 7009 and NGC 6826. All are located less than 5,000 light-years from Earth. They’re part of Chandra’s first systematic survey of such objects in our sun’s neighborhood. Astronomers published these results in the August 2012 issue of The Astronomical Journal. The first two authors are Joel Kastner and Rodolfo Montez Jr. of the Rochester Institute of Technology in New York, accompanied by 23 co-authors.

This next image is what Chandra alone saw. 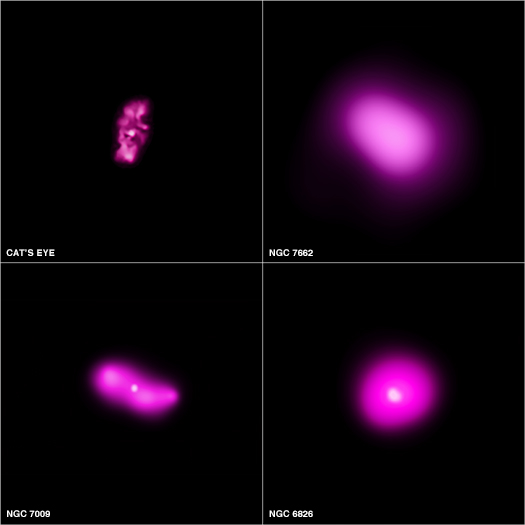 The final image is what the Hubble Space Telescope alone saw. 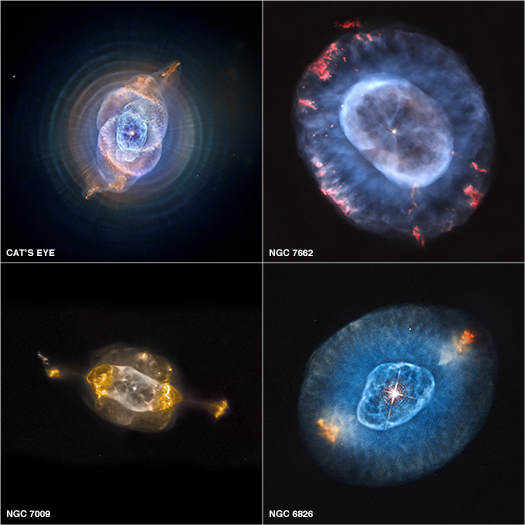 Four planetary nebulas as seen by the Hubble Space Telescope.

Read more about these images from Chandra’s X-ray Observatory 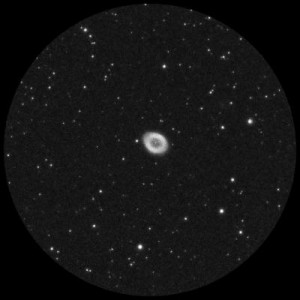 Perhaps the most famous of planetary nebulas among amateur astronomers, the Ring Nebula or M57, as photographed through amateur telescopes. Herschel’s early telescope saw these objects much less clearly than this. Image via www.smokymtnastro.org.

The term planetary nebula is a misnomer, by the way. These objects have nothing to do with planets. The famous astronomer William Herschel first observed this class of object through an early telescope in 1784 or ’85. They reminded him of the planet Uranus, which Herschel himself had discovered in 1781. Herschel’s name for these objects stuck, even though today we know that planetary nebulae have nothing to do with nearby planets like Uranus, and in fact are located far beyond our solar system.

Bottom line: Four planetary nebulas – all located within 5,000 light-years of Earth – as seen by the Chandra X-Ray Observatory and the Hubble Space Telescope. This post shows a composite image from both Chandra and Hubble, then two more images from Chandra alone and Hubble alone.