When our Milky Way merged with an ancient dwarf galaxy

Analysis of measurements via the Gaia space telescope – of star positions, brightnesses and distances – has let astronomers probe a merger 10 billion years ago between the primitive Milky Way and a dwarf galaxy called Gaia-Enceladus.

In 2018, astronomers proposed that that, in its early history, our Milky Way galaxy collided with and devoured a dwarf galaxy, thought to have been slightly more massive than the Small Magellanic Cloud. They call this hypothetical dwarf galaxy Gaia-Enceladus. Tantalizing evidence of this collision is a cluster of blue stars present in the Milky Way’s halo, which is a nearly spherical region of thinly scattered stars, globular clusters of stars, and tenuous gas surrounding our Milky Way. While scientists believed the collision and its subsequent merger led to the formation of our galaxy’s thick disk, the precise ages of these stars were unclear, until now.

Scientists from Instituto de Astrofisica de Canarias (IAC) in Spain used data from the Gaia spacecraft and pinned our galaxy’s most ancient stars – remnants of the merger – to be 10 to 13 billion years old. This provides evidence that the Milky Way–Gaia-Enceladus collision occurred 10 billion years ago. A statement from these scientists explains:

Thirteen billion years ago, stars began to form in two different stellar systems which then merged: one was a dwarf galaxy which we call Gaia-Enceladus, and the other was the main progenitor of our galaxy, some four times more massive and with a larger proportion of metals. Some ten billion years ago, there was a violent collision between the more massive system and Gaia-Enceladus. As a result some of its stars, and those of Gaia-Enceladus, were set into chaotic motion, and eventually formed the halo of the present Milky Way. After that there were violent bursts of star formation until 6,000 million years ago, when the gas settled into the disk of the galaxy, and produced what we know as the thin disk.

The study’s lead author is Carme Gallart of the Instituto de Astrofísica de Canarias, who researches galaxy formation and evolution of stellar populations. She told EarthSky:

The Milky Way has experienced many mergers, which have mainly contributed to form its halo. But most of them were small dwarf galaxies. The merger with Gaia-Enceladus is the earliest and most massive one we know of.

The Milky Way was already forming stars at the time of this merger, which brought along a steady supply of gas, heightening the formation pace. Thus the Gaia-Enceladus merger is thought to have resulted in violent bursts of star formation for four billion years. The merger also helped maintain a thick disk-like structure of the galaxy where the bulk of stars takes birth. Around 6 billion years ago, the gas abated into a thin disk that is seen today.

Today, all that is left of Gaia-Enceladus is a cluster of blue stars in Milky Way’s halo. Gallart said in a statement:

It’s a very gradual process – it’s not something like a car crash – it’s something that has an effect on the galaxy as a whole. It’s very massive so it happens slowly in human terms, not so slowly in cosmic time.

These precise measurements were possible with the data provided by the Gaia spacecraft, whose second data release was in April 2018. Astronomers have been mining Gaia’s data to obtain all sorts of new insights about our Milky Way galaxy. Gaia calculates accurate distances of Milky Way stars within 6,500 light-years of Earth, which amounts to over a billion observations. Using these distances, Gallart and her team ascertained the luminosities and colors of the stars. This, coupled with state-of-the-art simulations, enabled the team to determine the stars’ ages.

Of interest were the two distinct subpopulations within the Milky Way’s halo: red stars from our galaxy and blue remnants of Gaia-Enceladus. Gallart’s study provides evidence that these two populations have identical ages, with each one being at least 10 billion years old. The red stars were heated to extreme temperatures and flung out of the Milky Way during the merger and now reside alongside Gaia-Enceladus’ blue stars. 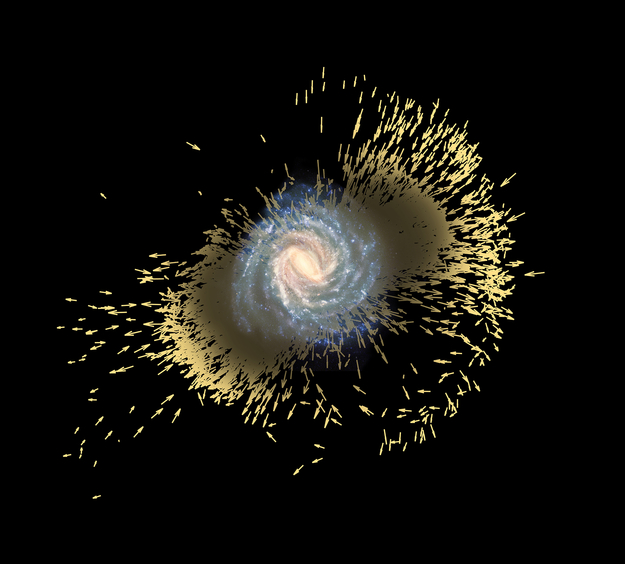 Artist’s concept of the debris of the Gaia-Enceladus galaxy. Image via Gaia

Bottom line: Accurate distances from Gaia spacecraft observations have helped determine the identical ages of red and blue star populations in the Milky Way’s halo. This result suggests that our Milky Way galaxy merged with the Gaia-Enceladus dwarf galaxy 10 billion years ago.

Source: Uncovering the birth of the Milky Way through accurate stellar ages with Gaia

Source: The merger that led to the formation of the Milky Way’s inner stellar halo and thick disk

Source: In disguise or out of reach: first clues about in situ and accreted stars in the stellar halo of the Milky Way from Gaia DR2