A new explanation for the driving force behind ancient fire fountain eruptions on the moon. Plus … do some volatiles on the moon and Earth have a common origin? 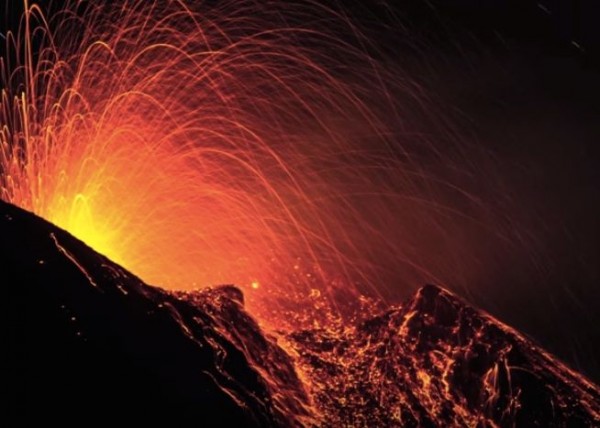 Image via video about moon volcanos

When the first astronauts went to the moon in the late 1960s and early ’70s, they found glass beads on the lunar surface that could only have been made in active volcanos. The beads are a sign that fire fountain eruptions took place on the moon, similar to the eruptions that occur frequently in Hawaii, for example. From that time, although we’ve known that the moon was once volcanically active, scientists have pondered the question of what volatile substances could have driven the lunar fire fountains. Scientists from Brown University and the Carnegie Institution for Science announced this week (August 24, 2015) that they’ve identified the volatile gas that drove those eruptions. They say carbon monoxide (CO) gas was responsible.

To create a volcanic fire fountain, you need volatiles – substances that have the ability to vaporize quickly – mixed in with the erupting lava. Volatile compounds turn into gas as lava rises from the depths of a volcano. When the gas expands, lava blasts into the air at the surface, creating the fire fountains. Alberto Saal, associate professor of earth, environmental, and planetary sciences at Brown and corresponding author of the new research, said:

The question for many years was what gas produced these sorts of eruptions on the moon. The gas is gone, so it hasn’t been easy to figure out.

The research, published in Nature Geoscience, suggests that lava associated with lunar fire fountains contained significant amounts of carbon. As it rose from the lunar depths, that carbon combined with oxygen to make substantial amounts carbon monoxide gas. According to these researchers:

That CO gas was responsible for the fire fountains that sprayed volcanic glass over parts of the lunar surface.

Orange and black glass beads collected from a pyroclastic deposit at the Apollo 17 landing site. These types of beads form dark ‘mantles’ around the volcanic vent site from which they were erupted. Many such dark mantles can be seen on the lunar surface. Image via NASA.

A statement released by Brown University on August 24 explained:

For many years, the moon was thought to be devoid of volatiles like hydrogen and carbon. It wasn’t until the last decade or so that volatiles were definitively detected in lunar samples. In 2008, Saal and colleagues detected water in lunar volcanic beads. They followed that discovery with detections of sulfur, chlorine and fluorine. While it became apparent that the moon was not completely depleted of volatiles as was once thought, none of the volatiles that had been detected were consistent with fire fountain eruptions. For example, if water had been the driving force, there should be mineralogical signatures in recovered samples. There are none.

For this research, Saal and his colleagues carefully analyzed glass beads brought back to Earth from the Apollo 15 and 17 missions. In particular, they looked at samples that contained melt inclusions, tiny dots of molten magma that became trapped within crystals of olivine. The crystals trap gases present in the magma before they can escape. 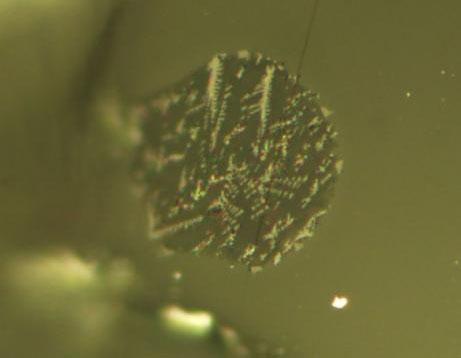 In addition to providing a potential answer to longstanding questions surrounding lunar fire fountains, the findings also serve as more evidence that some volatile reservoirs in the moon’s interior share a common origin with reservoirs in the Earth, the researchers say.

The amount of carbon detected in the melt inclusions was found to be very similar to the amount of carbon found in basalts erupted at Earth’s mid-ocean ridges. Saal and his colleagues have shown previously that Earth and the moon have similar concentrations of water and other volatiles. They have also shown that hydrogen isotope ratios from lunar samples are similar to that of Earth.

If volatile reservoirs on the Earth and moon do indeed share a common source, it has implications for understanding the moon’s origin. Scientists believe the moon formed when Earth was hit by a Mars-size object very early in its history. Debris from that impact accreted to form the moon. Saal said:

The volatile evidence suggests that either some of Earth’s volatiles survived that impact and were included in the accretion of the moon or that volatiles were delivered to both the Earth and moon at the same time from a common source — perhaps a bombardment of primitive meteorites.

Bottom line: Scientists have found traces of carbon in volcanic glass collected from the Apollo missions to the moon. The finding may not only explain the driving force behind ancient “fire fountain” eruptions on the moon but also suggest that some volatile elements on the moon and Earth have a common origin.