Farfarout is farthest object in our solar system yet known

Astronomers have confirmed that an object with the nickname of Farfarout is, to date, the farthest object we’ve seen in the solar system. 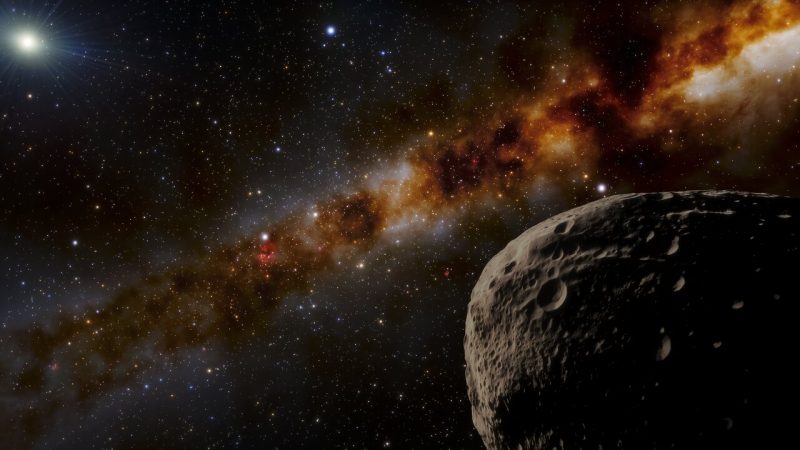 Artist’s concept of the object nicknamed Farfarout (lower right) in the outer reaches of our solar system. Estimated to be about 250 miles (400 km) across, it’s 132 times farther from the sun than Earth. In this illustration, the sun appears in the upper left. The Milky Way stretches diagonally across the background. Image via NOIRLab/ NSF/ AURA/ J. da Silva.

Back in January 2018, astronomers detected a faint object in our solar system so far away from the sun that they nicknamed it Farfarout. After a couple of years of additional observations, the astronomers are now, as of February 10, 2021, ready to declare that this object, with the formal designation 2018 AG37, is indeed the farthest object in the solar system yet discovered.

Because Farfarout is so, well, far out, it has a huge orbit around the sun that takes it a long time – more than a millennium – to complete. Because of this slow movement along its orbit, astronomers must take many observations over a long period of time to truly determine how far away it is.

The Subaru Telescope in Hawaii made the initial observation, and followup observations with the Gemini North telescope in Hawaii and the Magellan Telescopes in Chile have allowed astronomers to calculate Farfarout’s current distance of 132 astronomical units from the sun. An astronomical unit (AU) is defined as the distance of Earth from the sun, with 1 AU equaling 93 million miles (150 million km). Therefore, Farfarout is 132 times farther away from the sun than Earth is from the sun.

As delightful as the name Farfarout is, the object will get an official name in coming years after more observations provide more information. Astronomers estimate the dim solar system body to be about 250 miles across, which puts it at the small end to be labeled a dwarf planet. 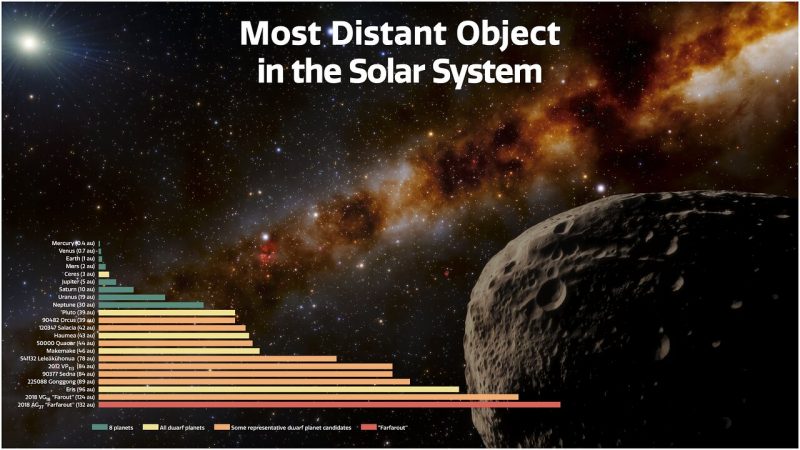 A quirky fact about Farfarout is that it isn’t always that far away. The object’s orbit is so stretched out that at its farthest point, it reaches 175 AU from the sun, while at its closest point it’s 27 AU. This would occasionally put it inside Neptune’s orbit. In fact, a close encounter with Neptune is probably what flung the object out into the far reaches of the solar system in the first place.

How far out is Farfarout compared to distant solar system objects? Neptune is 30 AU from the sun, and Pluto is, on average, 39 AU from the sun. Voyager 1 and Voyager 2, spacecraft launched in the 1970s, are the furthest manmade objects in space and lie at 152 and 126 AU, respectively.

The previous record holder for farthest object in the solar system was nicknamed Farout (no surprise) and was estimated to be 124 AU from the sun. But these “far out” objects can’t compete with the hypothesized Oort Cloud of comets, which is believed to lie between 2,000 and possibly as far as 50,000 AU from the sun, or 4/5 of a light-year away. So while Farfarout is indeed a very long way away, there are still things farther out to be discovered. Maybe a future “Farfarfarout” is in the offing.

This is a side-by-side comparison of the discovery images of Farfarout (2018 AG37) taken on January 15, 2018, and January 16, 2018. Note how the object moves in reference to background stars and galaxies. Image via Scott Sheppard/ NOIRLab.

Scott Sheppard, an astronomer from the Carnegie Institution for Science, co-discovered both Farout and Farfarout. He sees the newest record holder as a starting point, not an end:

The discovery of Farfarout shows our increasing ability to map the outer solar system and observe farther and farther towards the fringes of our solar system. Only with the advancements in the last few years of large digital cameras on very large telescopes has it been possible to efficiently discover very distant objects like Farfarout. Even though some of these distant objects are quite large – the size of dwarf planets – they are very faint because of their extreme distances from the sun. Farfarout is just the tip of the iceberg of objects in the very distant solar system.

Bottom line: Farfarout is the nickname given to the farthest known object in the solar system, which is currently at 132 AU, or more than 12 billion miles from the sun.