As the search for habitable exoworlds heats up, scientists will want to know: Is it life, or merely the illusion of life? 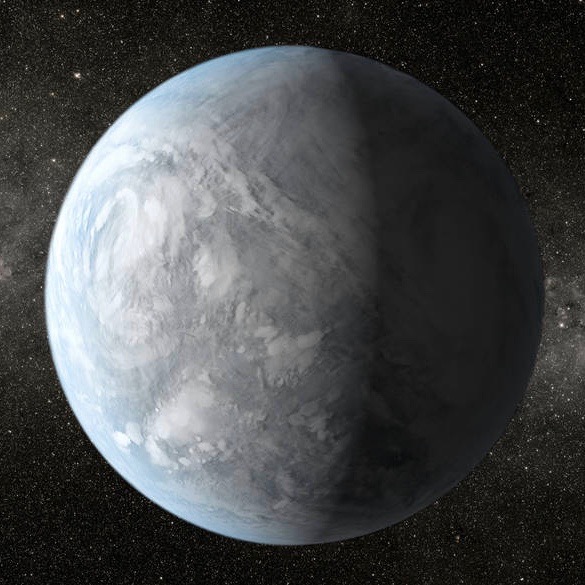 Artist’s concept of exoplanet Kepler 62E, about 1,200 light-years away in the constellation Lyra. Image via NASA Ames/JPL-Caltech/T. Pyle.

In recent years, astronomers have begun developing the ability to search for living worlds, that is, distant planets – orbiting far beyond our solar system – that show evidence of life in their atmospheres. The search involves what are called biosignatures in planetary atmospheres. For example, on Earth, the roughly 21% of our atmosphere in the form of oxygen comes primarily from microbes conducting photosynthesis, by which sunshine, water and carbon dioxide are converted to carbohydrates and oxygen. Now researchers from the University of Washington-based Virtual Planetary Laboratory have released a study that should help astronomers identify and rule out false positives in this ongoing life search. They published there work in the February 26, 216 issue of Astrophysical Journal Letters.

The search for biosignatures in exoplanets atmospheres has become a hot topic in part because of the pending launch of the James Webb Space Telescope, set for 2018. That telescope will be on a technological frontier; that is, it might help astronomers look for life on a handful of faraway worlds. This is done by transit spectroscopy, or studying the spectral features of light visible through a planet’s atmosphere when it transits or passes in front of its host star.

Edward Schwieterman, a doctoral student in astronomy at UW’s Virtual Planetary Laboratory, is lead author of the new study outlining how to search for false positives. He said in a statement:

We wanted to determine if there was something we could observe that gave away these ‘false positive’ cases among exoplanets.

We call them ‘biosignature impostors’ in the paper.

The potential discovery of life beyond our solar system is of such a huge magnitude and consequence, we really need to be sure we’ve got it right — that when we interpret the light from these exoplanets we know exactly what we’re looking for, and what could fool us.

On Earth, photosynthesis works to release oxygen into our atmosphere. Image via Wikimedia Commons.

One premise in the search for false positives in biosignatures is that – although on Earth oxygen is produced almost exclusively by photosynthesis — the same may not be universally true among the billions of exoworlds in our galaxy. Thus, the UW statement said, future researchers will need to look carefully at any oxygen they find in the atmospheres of distant planets:

Previous research from the Virtual Planetary Laboratory has found that some worlds can create oxygen ‘abiotically,’ or by nonliving means. This is more likely in the case of planets orbiting low-mass stars, which are smaller and dimmer than our sun and the most common in the universe.

The first abiotic method they identified results when the star’s ultraviolet light splits apart carbon dioxide (CO2) molecules, freeing some of the oxygen atoms to form into O2, the kind of oxygen present in Earth’s atmosphere.

The giveaway that this particular oxygen biosignature might not indicate life came when the researchers, through computer modeling, found that the process produces not only oxygen but also significant and potentially detectable amounts of carbon monoxide.

… So if we saw carbon dioxide and carbon monoxide together in the atmosphere of a rocky planet, we would know to be very suspicious that future oxygen detections would mean life.

There are other possible indicators of false positives, too, which the team described in their statement, along with strategies for identifying them. Schwieterman said:

With these strategies in hand, we can more quickly move on to more promising targets that may have true oxygen biosignatures.

Read more about the search for false positives in exoplanet biosignatures, from University of Washington

Bottom line: Astronomers at the University of Washington-based Virtual Planetary Laboratory have developed some strategies to help future researchers look for “false positives” in the search for exoplanets biosignatures, that is, signs of possible life such as oxygen in distant planetary atmospheres.