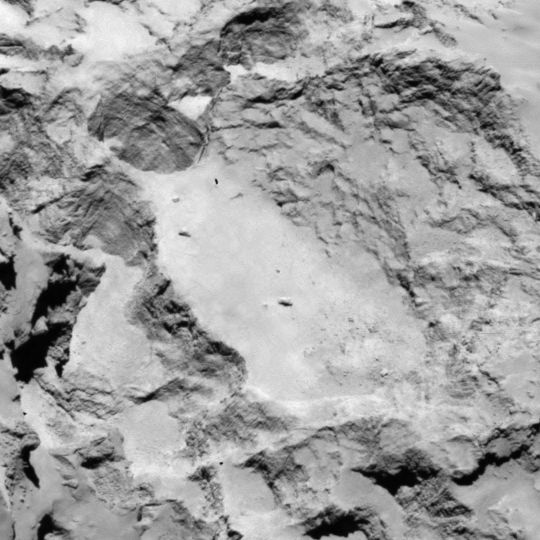 The Rosetta mission’s Philae lander is due to set down on Comet 67P/Churyumov–Gerasimenko on November 11, 2014. Rosetta has been moving in tandem with this comet since August 6, the first spacecraft ever to rendezvous with a comet and follow it in orbit. Today (August 25, 2014), ESA named five finalists as potential sites for Philae’s spectacular comet landing. Interesting to see that the prime sites are on differing terrain. They are far more diverse than I expected. One close-up image above; the other four below. The five finalists are:

Site A on the larger lobe, facing towards the neck and head. Area is layered and close to activity.

Site C. On the larger lobe, either a vent or impact crater with a smooth surrounding area. This is my joint favorite with Site B.

Site I. Smoother area on the smaller lobe, attractive because of the amount of sunlight it gets, the Sun only sets briefly here.

Site J. Smoother area on the smaller lobe, attractive because of the amount of sunlight it gets, the sun only sets briefly here. 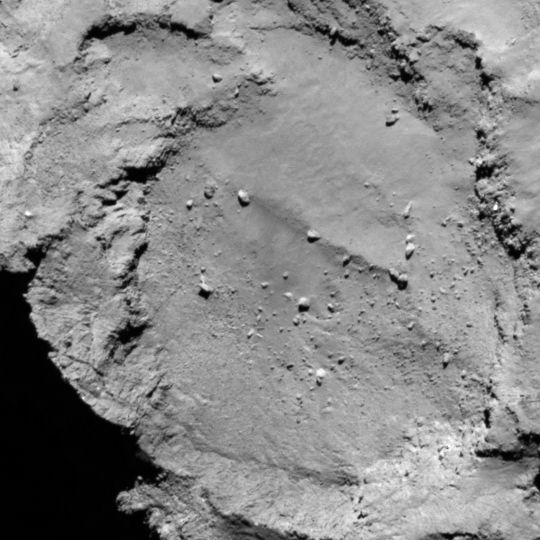 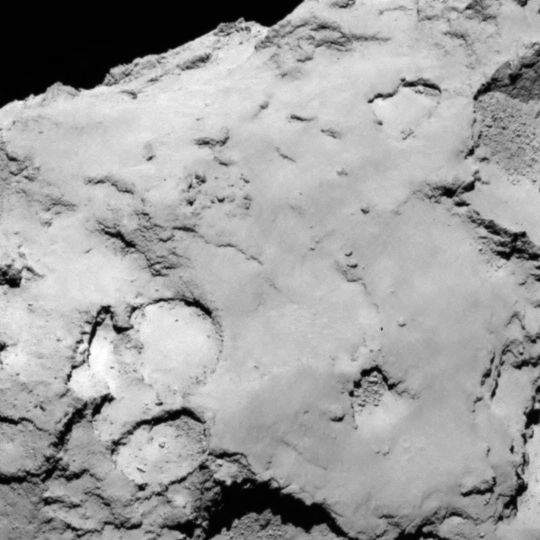 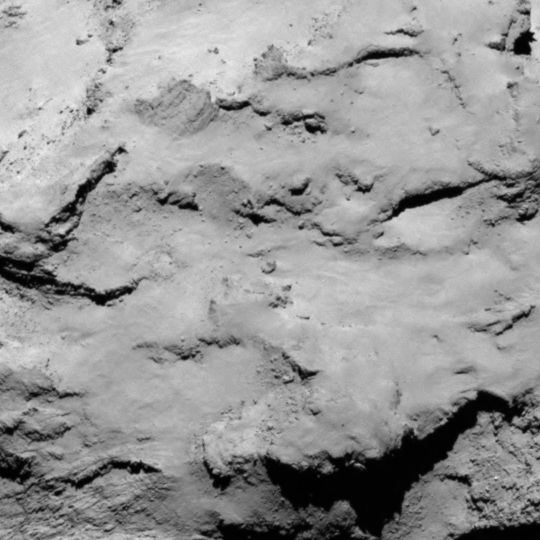 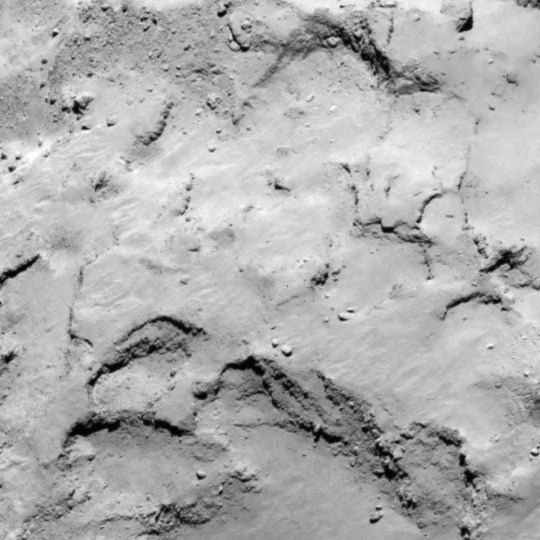 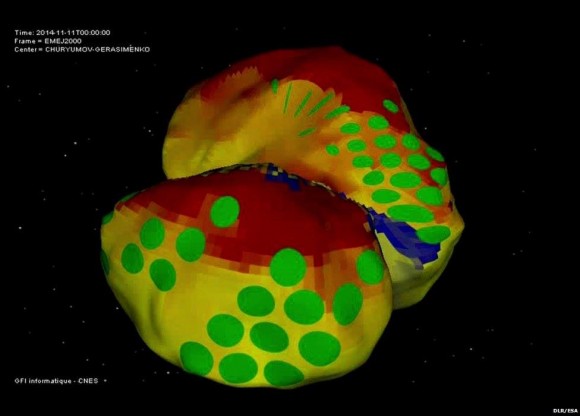 The computer graphic above was created from Rosetta OSIRIS and NavCam images. The best landing areas are those in yellow and orange. The green circles and ellipses mark provisional landing sites.

Comet 67P/Churyumov–Gerasimenko will remain in the current seasonal situation until well into 2015, when closer to perihelion the comet will undergo an equinox, and the seasons will reverse.

Some links to explore, via ESA:

Rosetta: The story so far

How to orbit a comet

Some post-arrival photos, from Rosetta’s OSIRIS NAC Camera and NavCam, below. 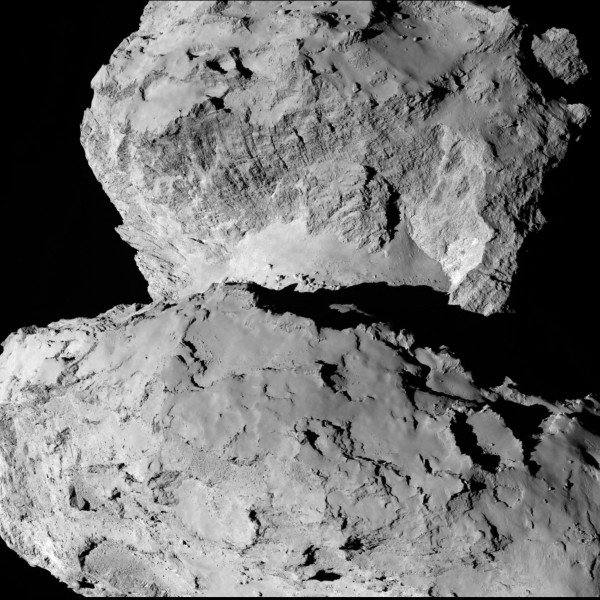 Comet 67P/Churyumov–Gerasimenko on August 7, 2014 at a distance of 104 kilometers / 64.5 miles by the Rosetta Mission OSIRIS NAC Camera. Looking from the larger lobe, over the ‘neck’, to the smaller lobe. These are a pair of images taken 17 minutes apart to form a stereo pair for a 3D image, part of the investigation in the search for a landing site for the Philae lander. Full article, both images and 3D anaglyph here. 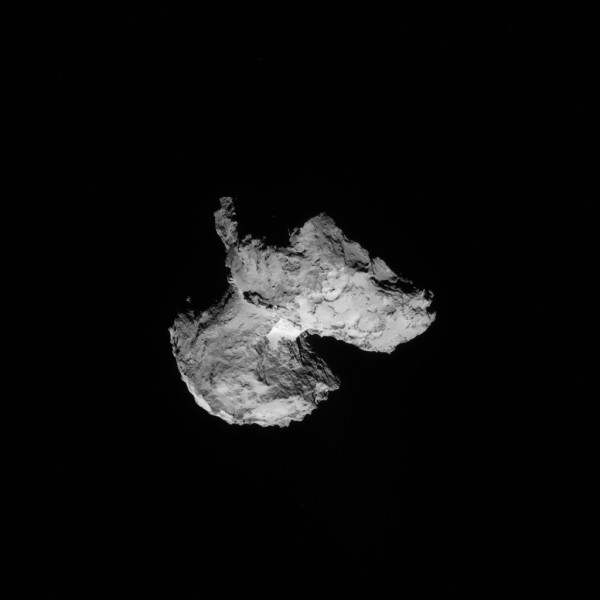 Imaged August 12, 2014 at a distance of 103 kilometers / 63.9 miles by the Rosetta Mission Navigation Camera (NavCam). Many features look like ablation features, even though Comet 67P/Churyumov-Gerasimenko has only been in an orbit to allow sublimation (what happens when a frozen material changes to gaseous form, as a comet nears the sun) only very recently, so could be impact features that have been compacted and frozen. Mystery is, though the comet has only been coming close enough to the sun at perihelion for sublimation since 1959, yet it looks more weathered than that. 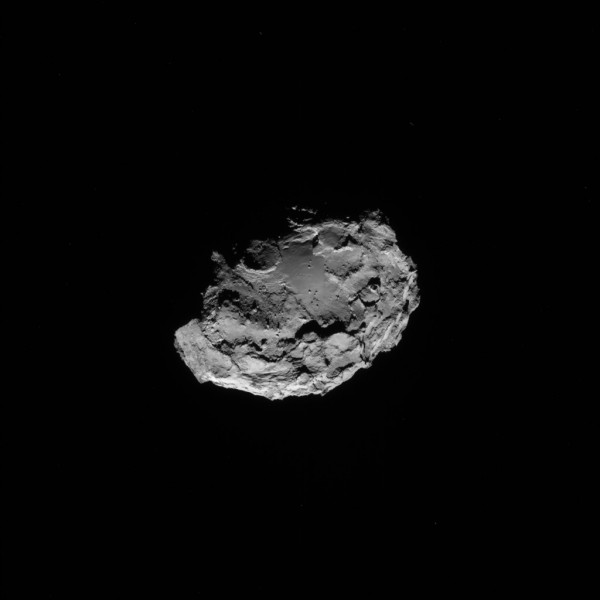 Imaged August 13, 2014 2014 at a distance of 115 kilometers / 71.4 miles by the Navigation Camera (NavCam). Here we are looking at the end of the larger lobe, the head is hidden over the over side. The smoother area complete with ice cliffs and ice boulders are clearly visible. To the right of center appears to what appears to be a mini volcano, a vent perhaps? 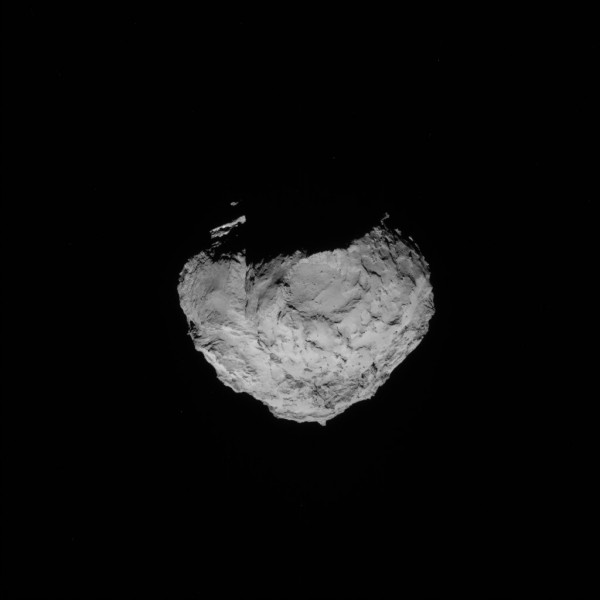 Imaged August 14, 2014 at a distance of 100 kilometers / 62.1 miles by the Navigation Camera (NavCam). This view is the exact opposite side of the fantastic NavCam image released yesterday (see above). Incredible view of the crater on the top of the ‘head’ or smaller lobe. If you look carefully, you can see the limb of the smaller lobe in front of the top of the large lobe with the ‘neck’ completely hidden. This crater has been seen before, but at oblique angles, this face on view is fantastic. The crater is terraced, surprising on such a small body. Larger craters on larger bodies like 4 Vesta, Rhea, Oberon, Earth’s moon, Mercury, Saturn’s moon Titan, Jupiter’s moon Ganymede, Mars, Venus, Earth and likely on 2 Pallas, 1 Ceres and Pluto etc; yes, in these cases, gravity causes slumping of the walls. But on a tiny comet? Very interesting. The wrinkle on the crater floor and the ice boulders are interesting too.

Bottom line: The search has begun for a landing site on Rosetta’s comet, Comet 67P/Churyumov–Gerasimenko. Over a three-day period – from Friday, August 22 to Sunday, August 24, 2014 – a meeting of Philae engineers and scientists will narrow the selection to five potential landing sites.