A storm on Saturn began in late 2010. Six months later, it wrapped entirely around the planet. Later, it subsided. Two planetary scientists explain. 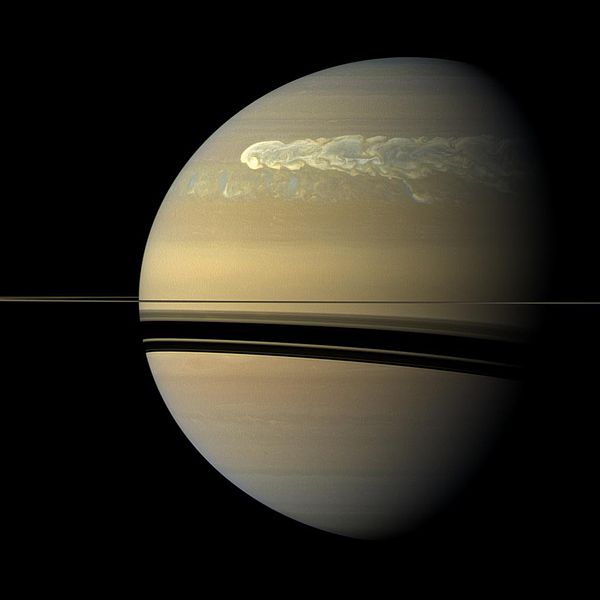 Caltech has released news of a study explaining the amazing storm that raged on the planet Saturn for much of 2011. You might be familiar with the idea that Jupiter’s Great Red Spot is a giant hurricane, which, by the way, has swirled on that planet for hundreds of earthly years. The 2011 storm on Saturn was much like Jupiter’s Red Spot; such storms are sometimes referred to as White Spots on Saturn. Saturn’s storms aren’t as enduring as the Red Spot, but, unlike the Red Spot on Jupiter, the 2011 storm encircled the entire globe of Saturn. Two Caltech planetary scientists have now suggested the cause for Saturn’s periodic storms, and they’ve explained why the storms on Jupiter and Saturn manifest differently. The journal Nature Geoscience published their study yesterday (April 13, 2015).

Andrew Ingersoll and Cheng Li used numerical modeling to simulate the formation of Saturn’s storms and found that they may be caused by the weight of the water molecules in the planet’s atmosphere. Because these water molecules are heavy compared to the hydrogen and helium that comprise most of Saturn’s atmosphere, they make the upper atmosphere lighter when they rain out. For that reason, they suppress convection, the movement of the atmosphere that happens when colder, denser material sinks under the influence of gravity.

The upper atmosphere is so cold and so massive that it takes 20 to 30 years for this cooling to trigger another storm.

And, indeed, these storms on Saturn have been seen to occur about every 20 to 30 years. Six such storms have been observed on Saturn over the past 140 years, alternating between the equator and midlatitudes. The most recent storm emerged in December 2010 and encircled the planet within six months. The storms usually occur when Saturn’s northern hemisphere is most tilted toward the sun.

Ingersoll and Li also propose that the absence of planet-encircling storms on Jupiter could be explained if Jupiter’s atmosphere contains less water vapor than Saturn’s atmosphere.

Read more about the reason for the Saturn storms from Caltech 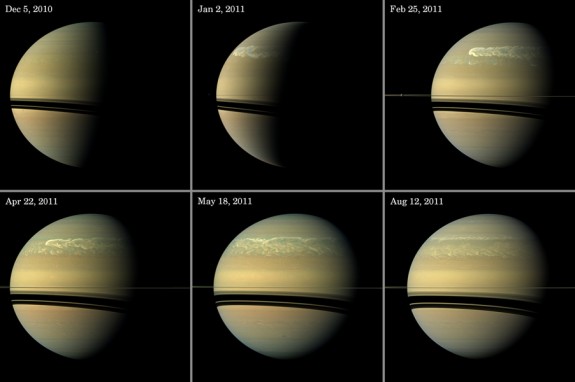 Bottom line: Caltech has released news of a study explaining the amazing storm that raged on the planet Saturn for much of 2011. They say the storm may have begun with a rain of heavier water molecules through the light hydrogen and helium that makes up most of Saturn’s atmosphere. A rain of this kind on Saturn may set up a series of conditions that ultimately leads to the formation of Saturn storms about every 20-30 years.