We know our sun is surrounded by a great bubble-like heliosphere, which sets our solar system apart from the rest of interstellar space. ESA’s Solar Orbiter – due to launch in February 2020 – will probe how the sun creates and controls this heliosphere.

On January 29, 2020, the European Space Agency (ESA) released the video above about its Solar Orbiter mission, aka SolO. The video shows you the SolO spacecraft, whose goal is to perform detailed measurements of the inner heliosphere, or sphere of the sun’s influence. It’ll also observe the nascent solar wind, that is, the solar wind (a stream of charged particles) just as it is leaving the sun. And the mission will perform close observations of the sun’s polar regions. A goal of the mission is to answer the question:

How does the sun create and control the heliosphere?

The spacecraft is due for launch in February 2020 from from Cape Canaveral, Florida. It’ll be launched by an Atlas V rocket, and afterwards deploy a 60-foot-long (18-meter-long) solar array (as measured from tip-to-tip), as well as a set of antennas and an instrument boom. ESA explained that the spacecraft will:

… take advantage of the gravitational force of Venus and Earth to adjust its trajectory, which will place it into an elliptical orbit around the sun. Solar Orbiter will get as close as 26 million miles (42 million km) to the sun, about one-quarter of the distance between the sun and Earth. The orbit will allow Solar Orbiter to see some of the never-before-imaged regions of the sun, including the poles. Solar Orbiter’s instruments peek at the star through tiny windows in a foot-thick (30-cm-thick) titanium foil shield, which will protect the spacecraft against the scorching temperatures and constant bombardment by highly charged particles of the solar wind.

ESA said SolO will carry 10 instruments for imaging the surface of our star and measuring the properties of the solar environment. 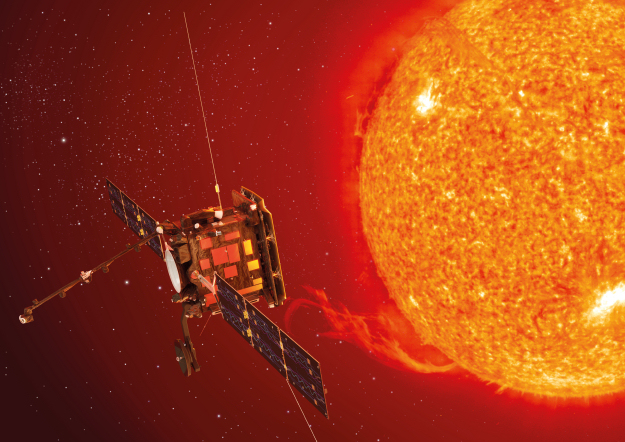 Artist’s concept of the Solar Orbiter – or SolO – via ESA.

Bottom line: ESA has released a video showing the launch and deployment of its Solar Orbiter or SolO, due for launch in February 2020.