‘Earth wind’ may generate water on the moon

Particles carried from Earth’s poles via our planet’s magnetosphere could be interacting with lunar rocks to create small quantities of water on the moon. 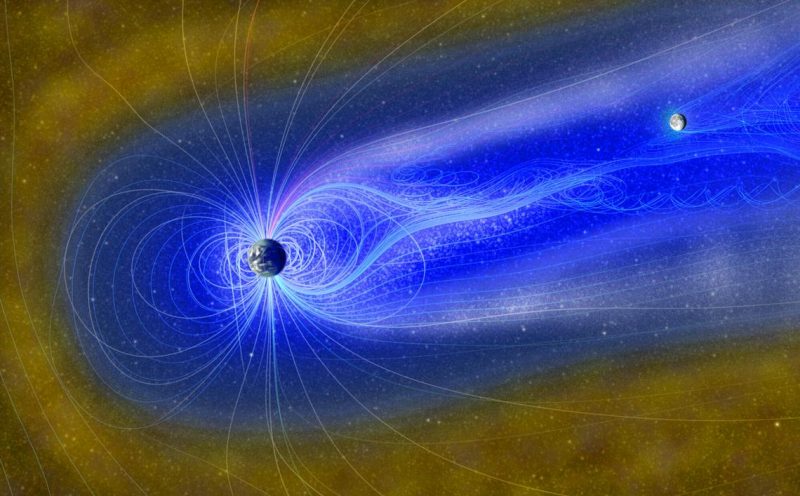 Artist’s concept of the moon within Earth’s magnetic tail, the part of our magnetosphere that stretches outward away from our sun. The moon sweeps within this tail each month at full moon. Image via E. Masongsong/ UCLA/ EPSS/ NASA/ GSFC/ SVS/ Duluth News Tribune.

By Bob King, aka AstroBob. Originally published in the Duluth News Tribune on February 16, 2021. Reprinted here with permission.

Finding water on the barren moon is one of the most remarkable discoveries of the post-Apollo era. Satellite mapping has revealed ice within permanently shadowed craters at the lunar poles and more recently in Clavius, a prominent crater on the lunar nearside that basks in sunshine two weeks out of every month. Comets and meteoroids likely delivered the water that eventually froze into ice, although water-rich lavas that erupted in the moon’s distant past may have contributed, too. 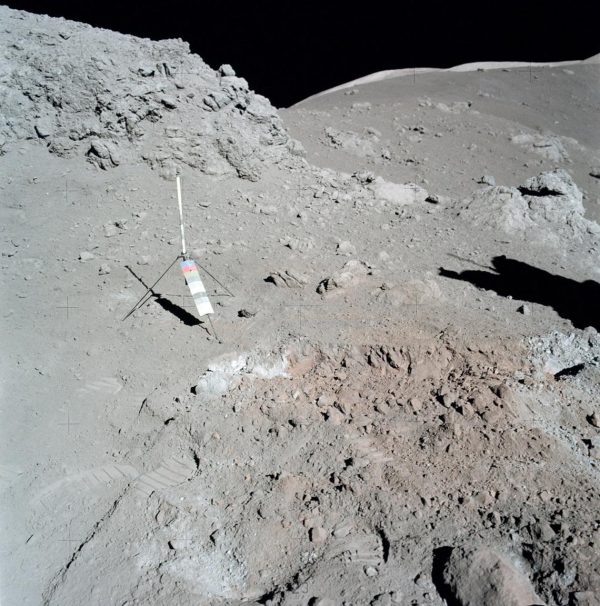 Orange soil stumbled on by the Apollo 17 astronauts contained glass droplets sprayed from a volcanic fire fountain 3.64 billion years ago. Later analyses found water locked inside some of the beads. Image via NASA/ Duluth News Tribune.

Back on Earth, scientists have found water locked inside volcanic glasses and rocks gathered by the Apollo 15 and 17 astronauts. In 2019, NASA’s LADEE mission (Lunar Atmosphere and Dust Environment Explorer) discovered that the constant stream of micrometeorites (tiny space rocks) bombarding the moon creates a thin, temporary atmosphere of water vapor. When the particles penetrate at least 3 inches (8 cm) into the surface, the shock of impact liberates water molecules attached to minerals in deeper soil not exposed to direct sunlight.

Just so we’re clear, the moon is far from sopping wet, but it’s not the bone-dry place we once thought. For comparison, the driest stretch of Sahara Desert has 100 times more of the wet stuff than the moon. To fill your 16-ounce water bottle you’d have to process about a metric ton of lunar soil.

The stream of protons and electrons expelled by the sun called the solar wind affects the Earth (shown here) and moon alike. Protons (hydrogen) in the wind bonds with oxygen in lunar soil to make water. Image via NASA/ Duluth News Tribune.

The sun also helps distill dribs and drabs of moon water when protons in the solar wind crash into the lunar surface and bond with oxygen atoms in minerals to make H2O. Protons are basically hydrogen atoms that have lost an electron. They’re the “H” in H2O. By the way, the same solar wind occasionally links up with Earth’s magnetic field and delivers hordes of protons and electrons that spark the aurora borealis. 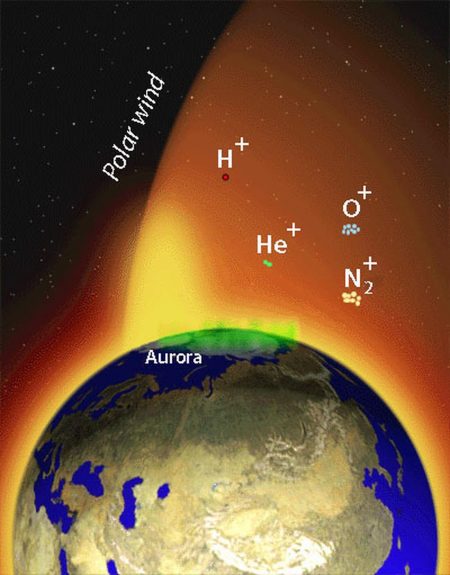 In a new study, a team of scientists discovered that an “Earth wind” of ionized atoms blowing from the polar regions can interact with lunar soil and rocks to make water molecules. H stands for hydrogen; He for helium, O for oxygen and N2 for nitrogen. The plus sign means the atoms or molecules have lost an electron and are positively charged. Image via NASA/ Bob King/ Duluth News Tribune.

A study published February 1, 2021, in the Astrophysical Journal Letters has found that Earth may also play a key role in water creation. Similar to the sun’s electrified particle wind, Earth has a wind of its own made of ionized hydrogen, helium, oxygen and nitrogen. “Ionized” means that the atoms have lost an electron and carry a positive charge.

Energized by interactions with the solar wind, some of the ionized atoms and molecules in the planet’s polar atmosphere shoot off into space where they’re trapped by Earth’s magnetic field, better known as the magnetosphere.

Most of the time the moon steers clear of the magnetosphere, which points away from the sun like a weathervane, but for 3-5 days each month it travels through it around the time of full moon. The magnetosphere deflects the solar wind, preventing the sun’s protons from ginning up fresh water on the lunar surface. With the moon cut off from its supply, astronomers assumed that lunar water formed by solar bombardment would quickly fizzle away into space, and the moon would emerge from its temporary magnetic shelter all the drier. 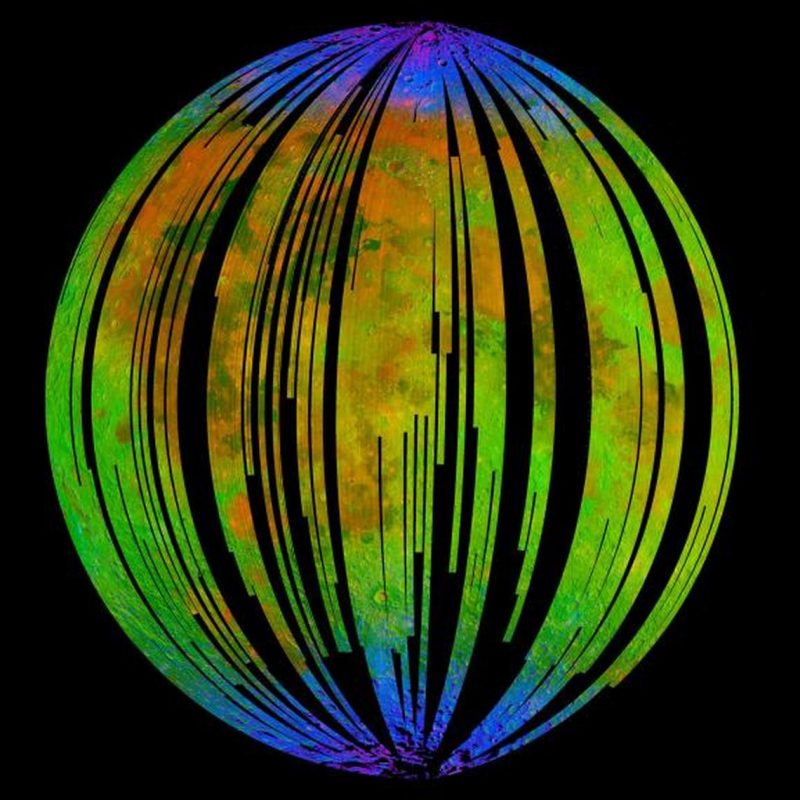 This image of the moon is from NASA’s Moon Mineralogy Mapper on the Indian Chandrayaan-1 probe. Small amounts of water and hydroxyl (related to water) are shown in blue. Most of the moon’s water is concentrated in the colder polar regions. Image via ISRO/ NASA/ JPL-Caltech/ Brown University/ USGS.

But no! Using data from India’s Chandrayaan-1 spacecraft, which mapped water in the moon’s polar regions, Chinese researchers made a surprising discovery. Water levels remained nearly the same each time the moon exited the magnetosphere. Something had to be flinging protons at our satellite to keep the water coming. Earth’s polar wind seemed the likely suspect.

Additional evidence came from the Japanese Kaguya lunar orbiter, active in the early 2000s, which detected scads of positively charged oxygen atoms at the moon each time it hid in the shadow of Earth’s magnetic tail. In addition to hydrogen, oxygen may also contribute to the creation of water on the moon. How amazing to think that ionic breezes from the Earth may help coat the lunar surface with life-giving water potentially beneficial to future astronauts.

Bottom line: Particles carried from Earth’s poles via our planet’s magnetosphere could be interacting with lunar rocks to create small quantities of water on the moon.

Bob King - aka AstroBob - is one of the world's best space and astronomy writers. He writes for Universe Today, and his own daily blog on the night sky is a delight to read. To read Bob's latest blog on "What's up in the night sky" please go to astrobob.areavoices.com.