Although it’s relatively nearby, Dragonfly 44 was missed for decades by astronomers because it’s very dim. But there’s more to this galaxy than meets the eye. 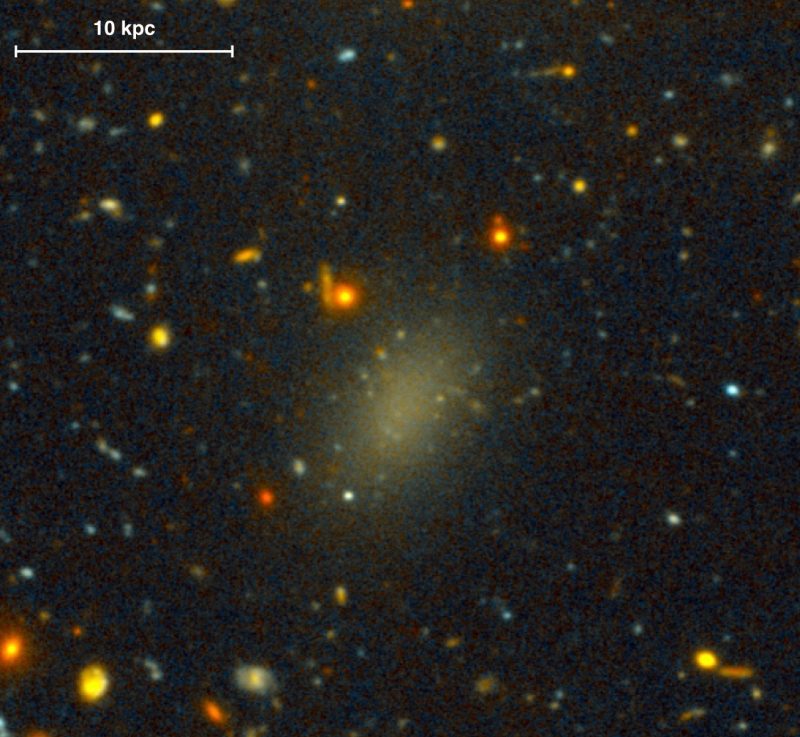 Astronomers have now identified and described a galaxy made almost entirely of dark matter, the mysterious unseen stuff known to us only via the force of gravity, which also makes up a significant fraction of the mass of the universe. The galaxy is relatively nearby. It’s called Dragonfly 44. It appears dim even through large telescopes, but looks can be deceiving and astronomers now know that there’s more – much more – to this galaxy than meets the eye.

The findings were published August 25, 2016 in The Astrophysical Journal Letters.

The region of the sky where this galaxy lies – in the Coma galaxy cluster – had been well scrutinized by astronomers over many decades.

Then, in 2015, the Dragonfly Telephoto Array was observing the Coma cluster and noticed something interesting. Upon further scrutiny, the team realized Dragonfly 44 has so few stars that it would be quickly ripped apart unless something were holding it together.

That something, according to the thinking of modern astronomers, is likely to be dark matter.

Dragonfly 44 in contrast to other galaxies, as seen by the Sloan Digital Sky Survey.

Astronomers set about trying to determine the amount of dark matter in Dragonfly 44. They first used the DEIMOS instrument ((DEep Imaging Multi-Object Spectrograph) installed on the Keck II telescope in Hawaii to measure the velocities of stars within the galaxy, observing a total of 33.5 hours over a period of six nights.

They found that the stars in this galaxy are moving unexpectedly fast. Because the motions of stars in a galaxy tell you how much matter there is, the astronomers were able to determine the galaxy’s mass. They realized that the amount of mass indicated by the motions of the stars in Dragonfly 44 was much greater than the mass indicated by the visible stars.

The mass of Dragonfly 44 is estimated to be a trillion times that of our sun. That’s similar to the mass of our own Milky Way galaxy, but our Milky Way has more than a hundred times more stars than Dragonfly 44.

Finding a galaxy with the mass of the Milky Way that is almost entirely dark was unexpected, and, what’s more, Dragonfly 44 isn’t the only one. Although these astronomers scrutinized Dragonfly 44 in their study (reported mostly thoroughly upon it), they also reported a population of large, very low surface brightness, spheroidal galaxies within in the Coma cluster. The apparent survival of these ultra-diffuse galaxies (UDGs) in a rich cluster suggests that they have very high masses.

Dragonfly 44 is one of the largest ultra diffuse galaxies in the Coma cluster.

Our results add to other recent evidence that many UDGs are ‘failed’ galaxies, with the sizes, dark matter content, and globular cluster systems of much more luminous objects.

This has big implications for the study of dark matter. It helps to have objects that are almost entirely made of dark matter so we don’t get confused by stars and all the other things that galaxies have. The only such galaxies we had to study before were tiny. This finding opens up a whole new class of massive objects that we can study.

Ultimately what we really want to learn is what dark matter is. The race is on to find massive dark galaxies that are even closer to us than Dragonfly 44, so we can look for feeble signals that may reveal a dark matter particle.

Bottom line: Dragonfly 44 is a relatively nearby galaxy that appears to be made almost entirely of dark matter.