It’s a tough measurement, but astronomers in Stockholm say they’ve proven dark matter exists in our part of the galaxy. 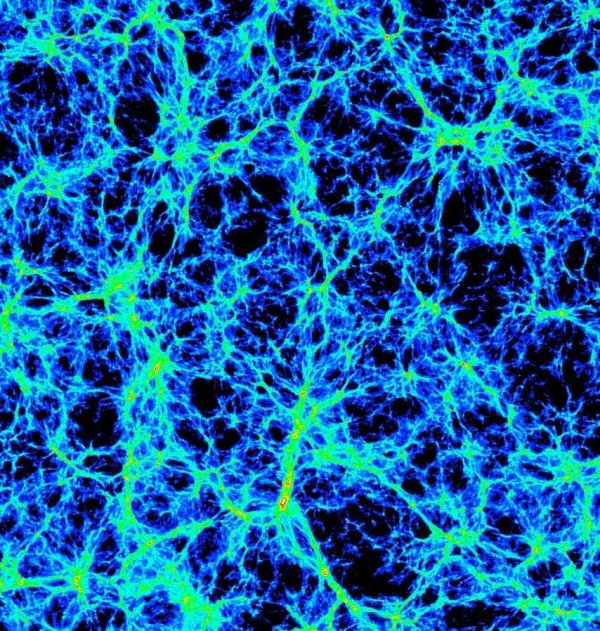 A simulation of dark matter in the large-scale structure of the universe. Image covers an area of 20 megaparsecs, about 65 million light-years. By contrast, our Milky Way galaxy is about 100,000 light-years wide. Image via CfA.

We knew there was dark matter in the outer part of the Milky Way. In fact, the dark matter surrounding our galaxy and other spiral galaxies is what first cued astronomers to the existence of this mysterious substance – now known to make some 26% of the entire universe – in 1978. Now a new study is providing evidence for the presence of dark matter in the innermost part of the Milky Way. There may even be dark matter lurking in our own solar system, and, if so, maybe today’s dark matter detectors will find it. The study – announced February 9, 2015 by University of Stockholm – claims to have demonstrated that large amounts of dark matter exist around us, and also between us and the center of our Milky Way galaxy. The Stockholm astronomers said in a statement:

The result constitutes a fundamental step forward in the quest for the nature of dark matter.

In the 1970s, astronomers Vera Rubin and Kent Ford discovered dark matter accidentally. They were looking at spiral galaxies and noticed that stars far from the galactic centers, in the sparsely populated outer regions, were moving just as fast as those closer in. This was unexpected. And yet the visible mass of these galaxies didn’t have enough gravity to keep the outer stars in such fast-moving orbits. Thus the astronomers were faced with a startling conclusion. There is more to galaxies than meets the eye, a tremendous amount of unseen matter in the outer regions of galaxies where visible stars are relatively few. Thus the concept of dark matter was born.

That discovery was a powerful step forward in our understanding of the universe, and, since then, astronomers have gotten very good at inferring the existence and properties of dark matter from its gravitational effects on visible matter and radiation. Indeed, the large-scale structure of the universe itself is now thought to be driven in large part by dark matter. However, no one has yet detected dark matter directly. We can only infer that it exists, not know that it does.

What’s more, it’s been very tough to establish that dark matter exists not only on the outskirts of our Milky Way, but also in the inner part of the galaxy, where our Earth and sun reside. That’s because our measurements – the same sort of measurements used to find dark matter in the first place – have not been precise enough to reveal dark matter from our own position in the Milky Way. Miguel Pato at the Department of Physics at Stockholm University said:

In our new study, we obtained for the first time a direct observational proof of the presence of dark matter in the innermost part of the Milky Way.

We have created the most complete compilation so far of published measurements of the motion of gas and stars in the Milky Way, and compared the measured rotation speed with that expected under the assumption that only luminous matter exists in the galaxy.

The observed rotation cannot be explained unless large amounts of dark matter exist around us, and between us and the galactic center.

Our method will allow for upcoming astronomical observations to measure the distribution of dark matter in our galaxy with unprecedented precision. This will permit to refine our understanding of the structure and evolution of our galaxy, and it will trigger more robust predictions for the many experiments worldwide that search for dark matter particles. The study therefore constitutes a fundamental step forward in the quest for the nature of dark matter. 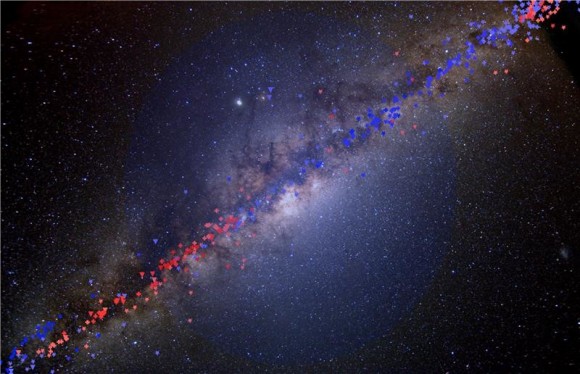 The red and blue dots here – which are overlaid on a photo of the disk of the Milky Way as seen from the Southern Hemisphere – are points where the Stockholm astronomers measured the motion of stars and gas in our galaxy. The blue or red represents their relative motion with respect to our sun. The spherically symmetric blue halo illustrates the dark matter distribution. Image via Serge Brunier and University of Stockholm.

Bottom line: Astronomers in Stockholm say their new technique has revealed dark matter in the inner Milky Way galaxy, including the area in which our sun and Earth reside. If that’s so, maybe today’s dark matter detectors will find it, providing the first direct dark matter detection.